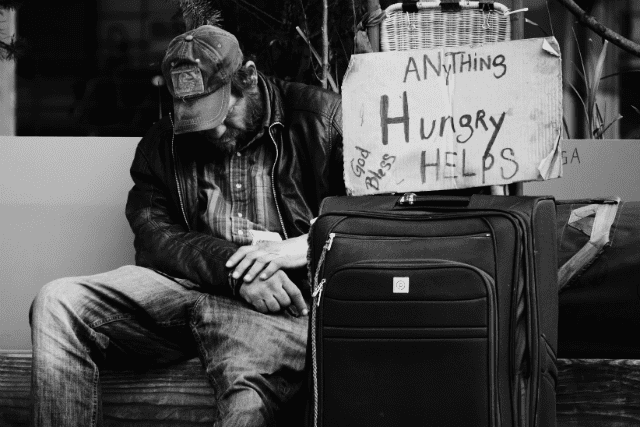 ‘The Way Out’ is a five-year initiative in the Western Territory.

When Commissioner Kenneth G. Hodder, Western Territorial Commander, returned to the Los Angeles area after 11 years living abroad, he said he was taken aback by the number of people on the streets—in tents, below freeway underpasses and at the base of our cities’ skyscrapers.

“It was a source of great sadness, but it was also a tremendous challenge,” Hodder said. “This simply should not be. And The Salvation Army, therefore, believes because we were born on the street that we have to attack the problems that are on the street.”

The statistics are striking. Los Angeles officials reported in June that the number of people living on the streets, in vehicles and shelters increased by about 12 percent over last year, putting the number of those experiencing homelessness at nearly 59,000 countywide, according to The Los Angeles Times. Within the city of Los Angeles, the number jumped to more than 36,000—a 16 percent increase.

Across the country, roughly 553,000 people experienced homelessness on a single night in 2018, according to the U.S. Department of Housing and Urban Development’s (HUD) 2018 Annual Homeless Assessment Report to Congress. And the data is particularly bleak in the West.

According to HUD’s numbers, of the top 10 states with the highest unsheltered homeless population in 2018, six are in the West: California, Washington, Oregon, Colorado, Nevada and Arizona. And Hawaii comes in at number 11.

“If we don’t do something about it, we’re not living up to the heritage that we have, and indeed, to the expectations the American public can rightfully have of what The Salvation Army is doing,” Hodder said.

To that end, Hodder launched The Way Out—an initiative to double the Western Territory’s impact on homelessness between now and 2024.

“In every community we’re going to do what that community needs to have done in order to address this problem,” Hodder said. “That will look different in different communities, because homelessness spans a spectrum of issues. There are prevention issues, there are crisis issues, there are housing issues, there are addiction problems, there are long-term educational issues. It’s a full range…but The Salvation Army, in this part of the country, has determined we simply must do something about it.”

The Army’s success, he said, will be determined by persons served across the Western Territory—which as of 2018, was 3,878,789 people.

“It’s not going to be measured by the number of beds; this is not a matter of simply doubling our shelter capacity,” Hodder said. “The Salvation Army is all about change. It’s all about changing circumstances, changing outlook, changing possibilities. If The Salvation Army can do that by providing a bed, we’ll do it. If we can do it by feeding someone who is hungry, we’ll do it. If we can do it by helping them recognize that they’re loved by God, that they have value and worth, and that God has a tremendous plan for their lives, we’re going to do that as well.”

In a one-day brain trust summit dedicated to the topic, held June 10, divisional leaders, program secretaries, social services directors and development directors from across the Western Territory came together to share progress and identify next steps.

Hodder reasserted the issue and laid out three action steps: claim a seat at the table at every level of government, have something to offer in a plan for impact, and just do it.

“We’re talking today about big problems and big solutions,” he said. “Let us not forget that in so far as The Salvation Army’s mission is concerned, this is something that can be done by every individual Salvationist, every corps, every division. We are only going to succeed in doubling our impact on homelessness if the goal becomes a part of the way we think and respond. This is a matter of the heart.”

Reports of divisional impact ranged from instituting a new shower ministry at the Anchorage Corps to a plan to house newly released female inmates via the Casper (Wyoming) Corps to a Deep Freeze operation in Tucson and Prescott, Arizona, that provides respite shelter with laundry facilities on cold nights.

Captain Nesan Kistan, Orange County (California) Coordinator, recounted the opening of a 224-bed temporary homeless shelter on the property of the Anaheim Adult Rehabilitation Center in February. At the city’s request, The Salvation Army opened the shelter in just 79 days. It is the start of The Salvation Army’s proposed response to further combat homelessness in Orange County through its forthcoming Center of Hope campus.

“The Salvation Army is called to do the things that challenge us the most…God wants to bless audacious dreams,” said Kistan, who also noted his own experience of homelessness at age 8. “He says he will do far more, immeasurably more, than you can imagine. I believe we’re living in those exciting days.”

In another session, Trey Hiller, Community Coordinator at the newly opened Bayview Impact Center in San Francisco, shared his approach to helping clients with their needs.

“Ten years ago right now, I was homeless in San Francisco, facing criminal, civil and health issues,” Hiller said. “I had every imaginable problem you could have and found time and time again that the great intentions and wonderful acts of love out there did not intersect with my specific needs. I needed love and support, but I also needed a civil and criminal attorney, a dentist. I needed skill sets to address my issues.”

Today, Hiller starts any client session with meditation to quiet the mind using a virtual reality headset. Next is reflection via the Beatitudes as found in The Message Bible. Then he starts with a simple question: Do you have a Gmail address?

The goal for anyone at the center is to set up those essentials first—an email account, a password manager, and communication capability through a phone or VoIP (Voice over Internet Protocol) app. Then they get into sourcing key identification documents, searching public benefits, screening medical issues, assessing financial and governmental reports and career development.

“When I was in a state of chaos, I couldn’t answer, ‘How can I help you?’ I needed everything.” Hiller said. “So instead, we ask: When was the last time you saw a doctor, a dentist?”

Of course, doubling the number of people The Salvation Army serves comes with a price tag.

“We anticipate that The Way Out, if we’re going to do it correctly, that the scope of it is so massive that The Salvation Army will need to raise considerable dollars in the next five years,” Hodder said. “We’re looking for individual support…We’re also developing relationships with foundations and corporations. We’re also working hard to develop our connections with local, state and federal resources.”

In Alaska, for instance, The Salvation Army Alaska Division and the Alaska Department of Corrections (ADOC) are working together to help incarcerated individuals at Hiland Mountain Correctional Center (HMCC) and the Goose Creek Correctional Center fight addiction. In its first two years of providing substance abuse treatment services with a $10 million, four-year contract from the ADOC, The Salvation Army aims to address deeper issues before an inmate is released in an effort to prevent issues like homelessness down the line.

“The ladies really enjoying having The Salvation Army there. We hear words like dignity, respect—that they not only hear it but feel it too,” said ADOC Superintendent Gloria Johnson. “Many didn’t want to come to terms with their addiction and blamed everyone else. The Salvation Army is looking at the drug of choice and breaking down criminal thinking to take responsibility for behavior and make amends to the community, the family they hurt. The Salvation Army is a God-send.”

In another case, Microsoft Philanthropy is partnering with The Salvation Army to ensure it has access to the finest tools, according to representative Trisha McDonald. It’s exploring AI case management to connect The Salvation Army from anywhere, chat bots to support intake, enhancing population demographics, and eliminating data silos and duplication.

And yet despite the planning and fundraising to come, Hodder said this initiative is fundamentally dependent on individual effort.

“It’s going to have to come as a consequence of a viewpoint and a philosophical perspective,” he said. “For us in The Salvation Army, that’s about the human heart. It’s about affecting the way that people respond to one another.”

That’s because, Hodder said, The Salvation Army is not built upon degrees people may or may not have, the excellence of its facilities, or the financial resources it can raise.

“It’s built upon individual men and women who are committed to living out what we believe God calls us to do,” Hodder said. “And the more that we can rely upon that divine wisdom and that gospel, the stronger and more effective The Salvation Army is going to be.”

Sharing is caring!
Tags:
Homelessness, July/August 2019, Territorial Headquarters, The Way Out, Vol 37 No 06