You’ve probably seen the red kettles and thrift stores,
and while we’re rightfully well known for both… 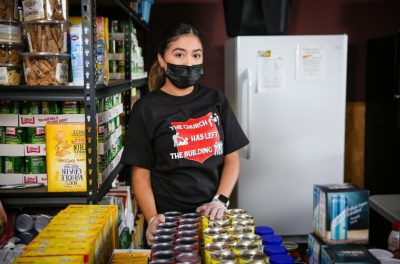 The Salvation Army is a faith-based organization that began in London in 1865. Its co-founders, a Methodist minister and his wife named William and Catherine Booth, walked the streets preaching to the homeless, the hungry and the destitute. The Booths’ efforts became The Salvation Army, which set out to offer compassionate, tangible service to people in need following a quasi-military structure with William Booth as its first General. As The Salvation Army spread, it became known as one of the largest providers of humanitarian aid. You may have even heard of its early motto: Soup, Soap and Salvation.

Today, the work is carried out across the U.S. by 63,000 employees, some 3 million volunteers and roughly 3,500 officers, who complete a two-year training program to become ordained ministers of The Salvation Army.

The Salvation Army, an international movement, is an evangelical part of the universal Christian church. Its message is based on the Bible. Its ministry is motivated by the love of God. Its mission is to preach the Gospel of Jesus Christ and to meet human needs in His name without discrimination.

With the generous support of the public, The Salvation Army serves some 31 million Americans in need each year.

That’s almost one person every second, every day.

See how every gift to The Salvation Army fights for good all year.

An international organization, The Salvation Army serves in more than 130 countries around the world and in every U.S. zip code, working to meet human needs in every community—exactly as that community needs.

See what The Salvation Army is doing near you.

Every program is rooted in a passion to serve God by serving the hurting, the helpless and the hopeless.

It’s biblical: We love because God first loved us.

Worship with The Salvation Army near you.

Yes, The Salvation Army does a lot.

And notably, we don’t do it alone.

Thanks to generous donors and a long list of corporate partners—including Walmart Stores, Kroger Company, JCPenney, Walgreens, UPS, Albertsons and many more—The Salvation Army is dedicated to Doing the Most Good. Thousands of business and community leaders also partner with us as advisory board members—from the National Advisory Board to the one serving in your neighborhood.

By meeting tangible needs, we give the world a lasting display of the love behind our beliefs. Since 1865, we have been working to provide sustainable solutions for the most vulnerable. We stay not just until the job is done, but long afterward, to ensure that the healing continues. With 82 cents of every dollar dedicated to directly supporting the needs of the community in which it was received, The Salvation Army is committed to stewarding every donation with integrity.

See our most recent annual report.

Will you join us in the Fight for Good?

“We’re not just a random agency or a nonprofit that gives away food, but we’re a lot more than that. We want them to feel as family. We want them to know that they have someone they can count on. They can come and talk to us. We’re here to help.”

Brush up on your Salvation Army knowledge with additional coursework on these specifics:

See more about The Salvation Army’s impact on:

Get tangible ideas for how you can do good today, right where you are on the Do Gooders Podcast.

Yes, listen to the podcast!

Take our quiz and discover where you can make the biggest impact in the fight for good.

We love because he first loved us. Get inside our vault of Scripture studies to help you discover the good Word.

Yes, take me to the library!