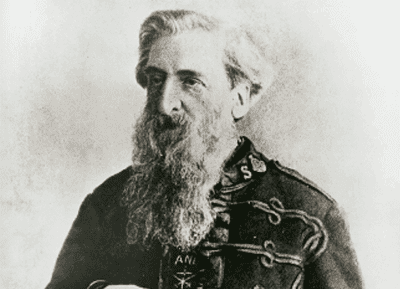 The Salvation Army celebrates Founders’ Day each year on July 2. The occasion recognizes the birthday of the organization started by William and Catherine Booth in poverty-stricken east London in 1865.

But what led to that first tent meeting?

Just north of the River Thames at the east end of the medieval walled City of London, clusters of villages were at one time surrounded by farmland. Then with the construction of docks and a railway, the expanding population led to extreme overcrowding and poor conditions.

“The invention about 1880 of the term ‘East End’ was rapidly taken up by the new halfpenny press, and in the pulpit and the music hall…A shabby man from Paddington, St. Marylebone or Battersea might pass muster as one of the respectable poor,” William Fishman wrote in “East End 1888.” “But the same man coming from Bethnal Green, Shadwell or Wapping was an ‘East Ender,’ the box of Keating’s bug powder must be reached for, and the spoons locked up. In the long run this cruel stigma came to do good. It was the final incentive to the poorest to get out of the East End at all costs, and it became a concentrated reminder to the public conscience that nothing to be found in the East End should be tolerated in a Christian country.”

As conditions worsened and waves of immigrants—French Protestant Huguenots, Irish, Ashkenazi Jews, and Bangladeshi—poured in, the area eventually caught the attention of social reformers.

In the 1800s, the Association for Promoting Cleanliness among the Poor built a penny bathhouse and laundry facility, a Ragged School offered basic education to street children, and dock workers unionized and demanded a fair hourly rate.

And in 1865, William Booth set up a tent and began preaching personal evangelism and practical philanthropy. He called it the Christian Revival Association, then East London Christian Mission, and finally The Salvation Army.

As a preacher, Booth wasn’t only concerned with a man’s soul. He and his wife, Catherine, worked to address the social issues of late Victorian England, particularly in the East End. He was influenced by John Wesley’s belief that “The Gospel of Christ knows of no religion, but social; no holiness but social.”

The Booths opened a soup kitchen, a match factory with a safe environment and decent wages, and a bank for the poor. He spent time in the worst slums of the East End, and finally distributed a plan of social welfare. “In Darkest England and the Way Out,” which Booth wrote with journalist W. T. Stead in 1890, sold 200,000 copies in its first year. It explored “the Social Question” of how to deal with the poor, destitute and unemployed.

Booth wrote, “A population sodden with drink, steeped in vice, eaten up by every social and physical malady, these are the denizens of Darkest England amidst whom my life has been spent, and to whose rescue I would now summon all that is best in the manhood and womanhood of our land.”

His social campaign was illustrated, displaying the eight elements of suffering Booth aimed to address from prostitution to criminals, drink or destitution. Today, The Salvation Army’s history of social service continues to influence its work in more than 131 countries with elements that still address what Booth outlined in his plan.

“Coupled with passionate caring, actually getting the drowning out of their difficulty has been a core value of Salvation Army social services since the beginning,” Dr. James Read, executive director of The Salvation Army Ethics Centre and senior policy analyst for the International Social Justice Commission, writes in his exploration of the organization’s aim. “Admittedly, the world is more complex than it was a century ago…Making a difference today is genuinely hard work.”

Yet the organization has always had one goal.

As Booth’s daughter, Evangeline, who led The Salvation Army in America and went on to become the fourth General, later wrote, “Service is our watchword, and there is no reward equal to that of doing the most good to the most people in the most need.”

The following helps us learn more about William Booth and his family as we recognize Founder’s Day.

Who is William Booth?

Following Jesus’ example, “Whatsoever you do to the least of my brothers that you do to me also,” Booth instructed followers to work in the public sphere. Jesus called on the faithful to redeem public life. Salvationists sought to effect this redemption with soup, soap and salvation. Soup, the first step, meant addressing material needs. Booth reminds us that the most basic expression of faith in public life is taking care of one another—feeding, nursing, sheltering and sustaining physical beings that are made in God’s image.

If this seems axiomatic, then recall that in Booth’s day, there were no food stamps and very few soup kitchens. Homeless shelters were practically nonexistent, neither were there many programs for job training. The poor were not welcome in most churches, and society had no concept of a social safety net.

See more in this tribute to the Founder on the centennial of his death.

Little-known facts about the Booth family

You probably have heard that William and Catherine Booth co-founded The Salvation Army, but did you know William Booth worked as a pawnbroker’s assistant for seven years before becoming a Methodist Minister at the age of 21? He hated the trade, but it gave him a lifelong empathy for those caught in a spiral of poverty.

See 17 things you didn’t know about the Booth family.

Why Booth’s “Do something” is for us, too.

Actions speak louder than words. Actions reveal whose you are, and in whom you have believed. James noted, As the body without the spirit is dead, so faith without deeds is dead (2:26). Actions give flight to the faith we proclaim. Serving others injects life into our religion. Doing something for others lends authenticity to our faith. Good works unlock closed doors and soften hardened hearts.

See how Booth’s challenge can also challenge us to never tire of doing something for others.

It is not just the ideas that define the organization, but the character of the people who make it up that matters.

Admittedly, the world is more complex than it was a century ago. And The Salvation Army’s social services are infinitely more sophisticated than they were a century ago. It may have been easy for Evangeline Booth to figure out what was maximally good for people she had in mind, and easy for her to see what “interventions” would be sustainably effective. But none of that is easy today. Making a difference today is genuinely hard work.

And doing the work ethically—that is, in a deliberately principled and mindful way—is part of what is hard about it. What, we must ask, is the good we are supposed to be doing the “most” of, anyway? Is it good in the eyes of the recipient as well as the agent? What and who gives us the authority to act at all? Are we using the right means as well as aiming at the right end? Etcetera.

See more in this history of The Salvation Army’s social services.

How William Booth’s ideas on poverty continue to shape The Salvation Army today.

Booth’s passion for assisting the lowest strata of society stemmed from a set of personal beliefs that gradually evolved over the course of his ministry. For one, he came to adopt the view that God’s will isn’t exclusively to prepare souls for the next life, but also to improve conditions and right injustices in this one—a role the established churches of his time had seemingly abandoned. “Why all this apparatus of temples and meeting-houses to save men from perdition in a world which is to come, while never a helping hand is stretched out to save them from the inferno of their present life?” he bemoans.

While our methods can and must continue to adapt over time as our understanding in all branches of knowledge deepens, the direction that Booth provides for shouldering the cause of the marginalized serves as a timeless signpost to help The Salvation Army and the whole of society find the way out.

See more on how William Booth’s ideas on poverty continue to shape The Salvation Army today.

What is The Salvation Army known for today?

Yes, The Salvation Army is more than red kettles and thrift stores.

What began with William Booth in London in 1865 to offer compassionate and tangible service to those who were homeless, hungry and destitute today offers an extensive range of services in more than 130 countries worldwide and in every ZIP code in America. Each year, The Salvation Army serves more than 23 million Americans in need.

Listen in as Christin Thieme, Caring Magazine editor and Do Gooders Podcast host, aims to provide as complete an overview as possible on the extensive work of The Salvation Army and its six key pillars of service.

Hear it straight from Booth himself

In 1865, William Booth was invited to hold a series of evangelistic meetings in the East End of London. He set up a tent in a Quaker graveyard, and his services became an instant success. His renown as a religious leader spread throughout London, and he attracted followers who were dedicated to fight for the souls of men and women.

To congregations who were desperately poor, he preached hope and salvation.