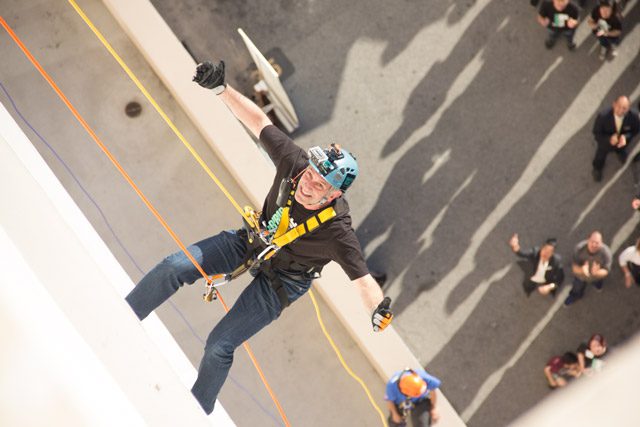 Taking on addiction for families

That’s what Gary Mendell will tell you. His son, Brian, struggled with a drug addiction for years, and after staying sober for 13 months, took his own life in 2011 at age 25.

Mendell created Shatterproof the following year to provide resources for families dealing with those in recovery from addiction.

“Right now, there are 25 million people in this country actively addicted, and the people who love them—their families—are struggling with answers on how to help them,” Mendell said. “There is no comprehensive place for people to go for information on how to help them. Part of what we do is provide that resource.”

Shatterproof is a national movement that believes addiction is a disease, not a choice. Mendell’s short-term goals for the organization are to reduce by half the number of people addicted to alcohol and drugs, reduce the number of deaths related to substance abuse, and decrease the costs of addiction to society. He hopes it will lead to the complete eradication of addiction as a whole.

To achieve this, Mendell designed Shatterproof around four strategic pillars—unite and empower, end the stigma, advocate for change, and research and innovate.

Shatterproof focuses on bringing people together to become a voice for individuals and families affected by addiction, and recruiting smaller organizations to the cause. Jeanne and Donald Keister—who lost their 24-year-old son Tyler to drug overdose in 2012—became Shatterproof volunteers via their organization atTAcK addiction.

“Addiction, to us, was something that happened to other families in other circumstances,” Jeanne Keister said. “Our family was your typical family who did things together…we never thought, in our small town, that heroin would ever be a word we would have to worry about.”

“[Mendell]’s trying to do nationally what we’re trying to do locally, and we’re assisting him where we can and he’s assisting us in the same manner,” Donald Keister said.

In 2012, more than 22 million people ages 12 and older had problems with substance dependence or abuse.

An estimated 75 percent of youth ages 12-17 reported seeing or hearing drug or alcohol prevention messages in and out of school, however only 11.9 percent of them participated in prevention programs.

Approximately 6.5 million people needed but did not receive treatment for substance abuse in 2012 due to lack of health coverage or concern over how others would react.

SOURCE: 2012 National Survey on Drug Use and Health

“It’s not always easy; the loss is always there and sometimes it makes you remember it a little more so, but you do it because…it’s never too late to save another person’s child and that’s what we feel our focus has to be,” Jeanne Keister said. “If somebody had started this maybe 15 to 20 years ago, maybe our child wouldn’t have been in this position and lost his life.”

The Shatterproof Challenge is a series of events across the country during which people rappel from the sides of buildings to raise awareness and funds to fight against addiction.

“That’s how we’re uniting people and making them aware of what we’re doing, and bringing them into our umbrella,” Mendell said.

They also work against the negative societal connotation of addiction.

Mendell said he has seen a reduction in shame related to the disease of addiction in those exposed to the Shatterproof events. “We’re empowering them to create change because by doing this, it’s ending the stigma,” he said. In one challenge event in Milwaukee, Wis., a woman Mendell met in a hotel lobby decided to rappel. Her brother is an addict and when she did the challenge, she said she told him about it and he cried.

“Think about her brother; [he probably] felt like, ‘Wow, my sister [rappelled] off a building to raise awareness because I have a disease,’” Mendell said. “That saves lives.”

To advocate for change, Shatterproof runs campaigns favoring better addiction prevention and treatment efforts throughout the United States that will help relieve some of the stress felt by individuals and families that need the help.

Mendell said Shatterproof acquired 26,000 signatures in a 2013 petition and sent it to President Barack Obama’s administration regarding final regulations on the Mental Health Parity and Addiction Equity Act of 2008, which requires the group health plans and health insurance agencies treat mental health or substance abuse disorder cases as equally as all other medical and surgical cases.

Other public policy efforts include the passage of the 911 Good Samaritan Laws in all states, which would protect drug overdose victims and witnesses from criminal prosecution in order for them to seek immediate help and to make a prescription drug used to reverse the effects of overdose—Naloxone—more accessible.

“One of my vows after the death of my son was to save lives,” said Dave Humes, Shatterproof public policy coordinator, who lost his son, Greg, to an overdose in 2012. “We need to educate people and let them know that the words ‘not my child’ should not be in their vocabulary because this disease goes across all demographics. It touches everybody, and we need for those who have not been touched by this disease to be educated about it before it does touch them and it’s too late.”

[button color=”black” size=”normal” alignment=”none” rel=”follow” openin=”newwindow” url=”shatterproof.org”]Share your story of dealing with addiction and read those of others at shatterproof.org.[/button]
Sharing is caring!
Tags:
addiction, Fall 2014, family, Impact, November 2014, Vol 20 No 03