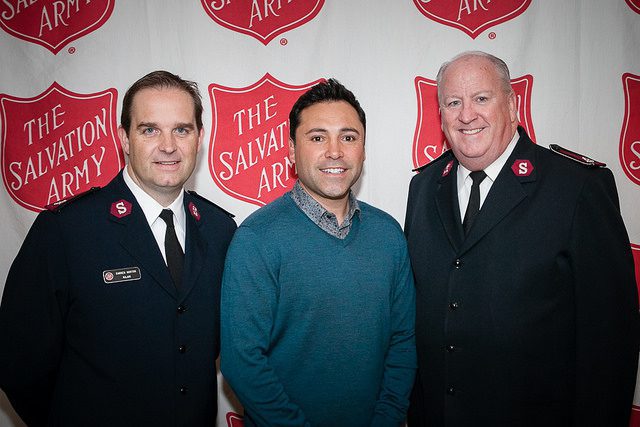 Norton acknowledged the impact of Salvation Army programs in Pasadena—from 17,629 food boxes distributed to 31,000 nights of lodging to low-income seniors in the Silvercrest Residence in the past year—but said that people are more important than the programs.

“We go beyond the food box or the place to stay after school, we offer a community with social and spiritual help in addiction to the practical needs that we meet,” he said. “We’re not just about handing out goods.”

Lisa Ummel is one of those people. She dropped out of the University of Southern California and spent the following 15 years in the holds of addiction.

“I had my three children during this time so it wasn’t all bad, but I also made the worst decisions of my life then,” she said. “I just wanted to go to sleep and not wake up.”

She completed the Army’s Adult Rehabilitation Center (ARC) program in Pasadena in 2005, regained custody of her children, and began working full-time.

“I learned life skills, about God and that my life was worth saving, that the damage was not irreparable,” she told attendees. “I was always running or hiding but today I’m proud of the person I’ve become. I’m no longer a felon. I’m a productive member of society. I do things that seem normal, but it’s a big change for an addict and I wouldn’t have done it without The Salvation Army.”

As a resident of Pasadena, de la Hoya said, “I can attest to what great programs The Salvation Army has because I’ve been through them; I’ve experienced them myself.”

He affirmed his willingness to help, both monetarily and to “do whatever I can to continue this great work that you do.”