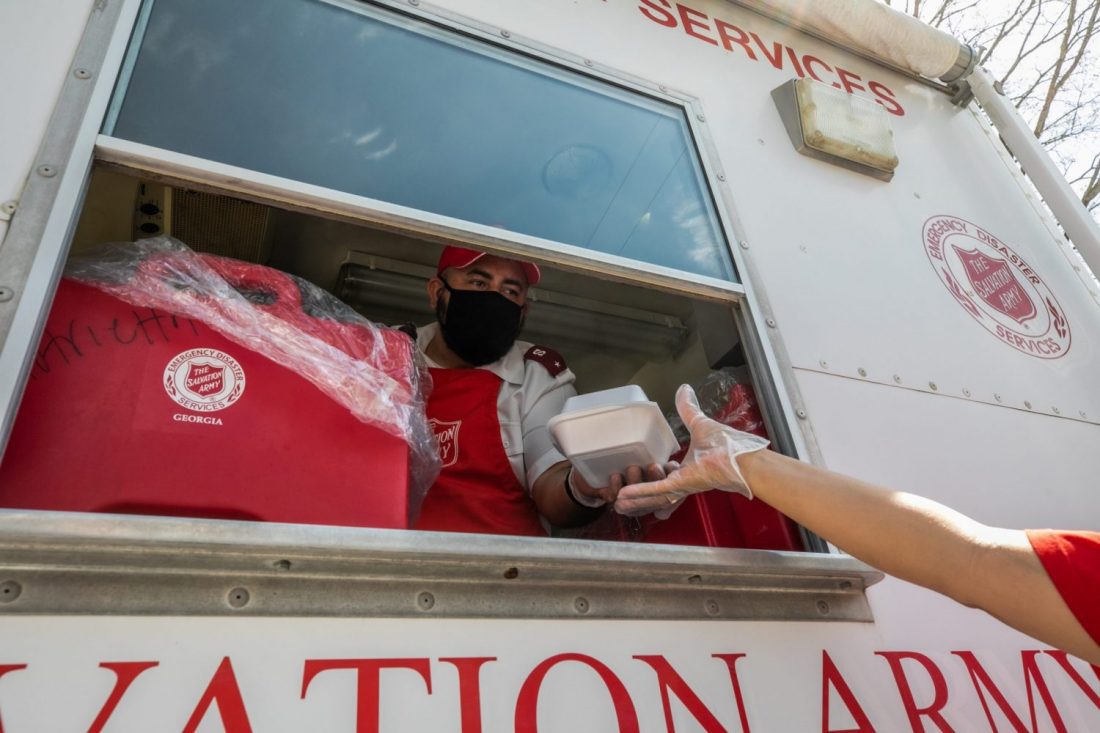 Western Territorial Commander Commissioner Kenneth G. Hodder held a teleconference meeting April 8 with members of the Territorial Executive Council, the 13th of such meetings regarding The Salvation Army’s response to COVID-19.

Limited participants met in the Territorial Headquarters boardroom, each wearing a mask, with divisional leaders and key staff joining from across the West by Zoom.

Hodder reminded command leaders to promote the territory’s Easter program that will be held online April 12 at 7 p.m. Anyone can join the online meeting, during which Hodder will bring a message of hope, at the New Frontier Chronicle Facebook page or the territory’s YouTube channel.

Hodder also thanked Territorial Executive Director of Development Debbie Rossi for her team’s efforts along with New Frontier Publications Editor in Chief Christin Thieme for the special edition newspaper, the Do Good Dispatch, that is designed to provide a brief introduction to the Army, an inspirational message from Hodder and information on the Army’s response to COVID-19 across the West that can be distributed in food boxes and activity bags.

Leaders from the Intermountain and Northwest divisions, Adult Rehabilitation Center Command (ARC), College for Officer Training at Crestmont (CFOT) and the Silvercrest department then presented three-minute reports on the latest efforts.

In Colorado, Intermountain Divisional Commander Major Mike Dickinson said the state has renewed its request for the Army to be more involved with the distribution of personal protective equipment (PPE) and baby supplies. It has also requested that the Army take over all food distribution in the state.

In both Aurora and Denver, the Army has seen an increased need for food. The National Guard is present in Denver. The division has received a large donation of hand sanitizer made at a distillery it plans to repackage and distribute.

The division’s call center is receiving about 1,100 calls looking for the assistance a day—a number it would usually receive in a month. Dickinson said many of the calls have been requests for rent assistance as Colorado has yet to implement any moratoriums on evictions, and that the Army has a little over $1 million in pending requests.

The state of Colorado has issued a $500,000 contract to The Salvation Army for rent assistance. Of the 16 agencies that were awarded the rent assistance contracts, the Army received the largest share.

In the Northwest Division, Divisional Commander Lt. Colonel Bill Dickinson said the division received news from the city of Seattle that they’re putting up a temporary modular structure at the Memorial Stadium at the Seattle Center. The 200-bed shelter will be fully funded, and the Army should have it opened April 13.

“That will let us move some of our smaller shelters,” Dickinson said.

The division also received a $200,000 gift from the Murdock foundation for the Army’s relief effort.

Dickinson said a representative from the Army attended a Community Organizations Active in Disaster (COAD) meeting, shocking others with a report of all The Salvation Army is doing.

“The Salvation Army is stepping up in areas where other volunteer groups in our communities, for whatever reason, aren’t doing so,” he said.

Las Vegas continues to be the division’s most dynamic and turbulent location for the virus, Pontsler said. Most of the Army’s buildings are full there. The Army has received 50 cots from the Red Cross and has others on the way. In the coming days, 32 isolation beds from Clark County will become available.

The Rotary Club in Las Vegas reached out to The Salvation Army to partner for health and wellness kits for first responders. The club will provide supplies, and members of the club are putting the kits together at the Las Vegas Citadel Corps. The kits will then be distributed in a drive-through.

Adult Rehabilitation Centers (ARC) Commander Major Henry Graciani announced ARC Connect, a way to help both the men and women in the centers as well as their loved ones. Graciani said many beneficiaries are concerned about their loved ones and what they are struggling with during COVID-19, so the ARC has asked them the city that their family is in and has contacted the local corps to find services there. While ARC Connect doesn’t guarantee services, it provides connections and peace of mind for beneficiaries.

In San Diego, men from the ARC pick up food three times a week from Cisco. In Anaheim (California), Major Charles Fowler took beneficiaries to La Palma to clear out another thrift store to be used as a shelter. In Pasadena, female beneficiaries have transformed a garage into a second living space and men are working on the property for work therapy. The Riverside (California) ARC remains very engaged, Graciani said, adding that the center is preparing its Holy Week evangelistic campaign.

Throughout the command, Graciani noted the ARC is more actively engaging with the corps. Graduations continue, and while intakes are on hold, centers are building a waiting list and leaders are trying to find better health screening tools for intake.

CFOT Principal Major Nigel Cross reported cadets remain on EDS deployment in the California South Division. Crestmont officers are helping to provide emotional and spiritual care to seniors through the Silverline. The canteen is out daily delivering meals throughout Southern California. CFOT is ramping up to start classes on Monday so cadets will be ready for Commissioning.

Hodder asked if plans have been made for finding replacement volunteers for cadets once they resume classes. Territorial Emergency Disaster Services Director John Berglund said cadets might be replaced with members of the National Guard.

Silvercrest Executive Director Susan Lawrence said one Silvercrest resident who tested positive for COVID-19 died, but remains the only positive diagnosis in the West’s facilities, including Silvercrest staff members.

Lawrence expressed thanks to the cadets and the divisions for their support to Silvercrest. “The Silverline is going well,” Lawrence said. “We are very grateful for that.”

Hodder thanked all command heads and leaders for their work.

“What the West is accomplishing is truly remarkable,” he said. Hodder noted that when he spoke with General Brian Peddle recently, the first thing the General commented on is the extent of the activity that is going on in the territory as it pertains to the COVID-19 response.

“Please spread the word to your officers and staff,” Hodder said before closing the meeting in prayer. “You’re making a huge difference in the lives of people and for the kingdom.”