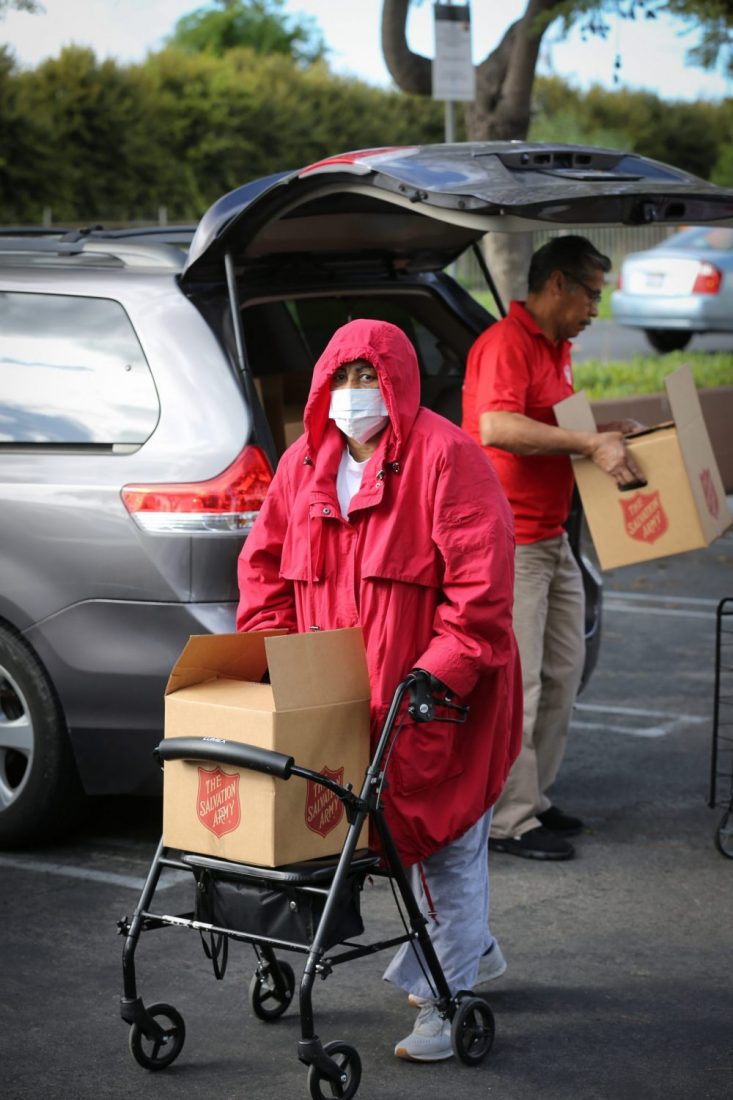 Western Territorial Commander Commissioner Kenneth G. Hodder held a teleconference meeting April 3 with members of the Territorial Executive Council, the 11th of such meetings regarding The Salvation Army’s response to COVID-19.

Hodder noted that he was wearing a mask today to comply with an expected announcement from Los Angeles County that masks are to be worn outside the home. Masks are also now available for personnel working at the Crestmont campus.

After a roll call of command heads, Hodder shared several announcements. The first was regarding the divisions’ submission of 30 and 60-day feeding plans to FEMA; today is the deadline The Salvation Army established. Alaska is working on a multi-agency plan, which is challenging because the state has so many different, often isolated, communities. Territorial Emergency Disaster Services (EDS) Director John Berglund has provided Army personnel with letters from FEMA, to supplement the letters they already have, authorizing them as FEMA workers to provide emergency services.

Corps and unit strategic plans, which had been due this spring, will now be due Sept. 30. Hodder encouraged the corps to make good use of their advisory board members during this time, both in planning and serving.

Next week, the command update meetings will take place on Monday and Wednesday, April 6 and 8, with six commands reporting at each meeting instead of four. This will allow leaders to spend time on Good Friday with officers and other individuals working on the front lines.

“The spiritual significance of that day is great,” Hodder said.

Finally, Hodder announced more cancelations for June. These events were to take place on the Crestmont campus: the Kroc Leadership and Marketing Work Group, Territorial Executive Conference (expected to now take place online), and Territorial Officers Institute (TOI). Decisions about July events have yet to be made.

Southwest Divisional Commander Lt. Colonel Kelly Pontsler reported on some of the outstanding efforts of the division’s smaller corps. The Chandler (Arizona) Corps received a large donation of dog food, which they’ve distributed to help people keep their pets—the city was seeing many people surrender animals due to financial concerns. The corps also connected with United Airlines, which donated 106 airplane meal packs.

The Roswell (New Mexico) Corps has a small house next to the corps that has been made available to the city so medical personnel can clean up before they return to their homes.

The Prescott (Arizona) Corps participated in a food and supplies drive with a local radio station that saw 250 cars drive through, bringing in 3,000 pounds of essential items. The corps is also working the local Meals On Wheels program.

Arizona U.S. Senator Martha McSally has directed her donors toward the Army, either with donations or to volunteer.

Pontsler noted that the division is only weeks away from hot weather; last year 24 weeks of extreme heat were recorded. Thus, even amid the COVID-19 crisis, they are preparing for heat relief, when they will need to operate cooling stations and provide water. It’s challenging, as currently no water is available.

“I’m thrilled with Senator McSally’s support of The Salvation Army…and to work with the tribal nation, too—excellent,” Hodder said.

In California, the Bakersfield ARC packed 175 food boxes with the Bakersfield Corps and delivered them to a senior living residence. The Long Beach ARC is working with the Long Beach Corps social services making food boxes and providing janitorial assistance. Graciani said the men continue to be grateful to be of service to the corps and community during this time.

Fresno ARC has provided one Spanish-speaking employee to the corps to assist the Spanish-speaking population coming to the Army for help. She is also helping pack food boxes. In addition, the ARC is sending beneficiaries to clean the Clovis Corps so it is ready to receive more product, and some of the men will be painting the chapel for the corps.

The Canoga Park ARC helped with a large donation of toilet paper in the Porter Ranch area, picking it up and delivering it for the corps. The Stockton ARC is sending men Monday through Friday to help out at the corps.

San Bernardino has been sending beneficiaries and an employee three days a week to the Ontario Corps to help with food boxes. These men are replacing senior citizen volunteers who need to stay home during this time. They deployed 25 beneficiaries to the San Bernardino Corps today to help with food boxes. “They’re also extremely grateful to be helpful to the community during these difficult times,” Graciani said.

The Las Vegas ARC has been working with the Army’s Clark County Command Social Services and EDS by providing a truck and driver to pick up and deliver donations on the Army’s Owens Campus. Captain Ron McKinney will also be doing a Zoom interview with news anchor Kendall Kim for NBC News Las Vegas about the ARC and to ask for donations.

“The fact that the corps are developing closer relationships with the ARCs…that is a marvelous thing that will have a lasting impact,” Hodder said.

Graciani added that in Hillsboro, Oregon, the Army is preparing to convert its store—that had been preparing to open again—to a shelter. They’re working with the city on this.

CFOT Principal Major Nigel Cross reported that the cadets continue to assist California South EDS. Three cadets are at the LA Red Shield, sorting food and delivering it to homeless individuals. In San Luis Obispo, two cadets are packing food boxes and delivering them to seniors. This week the other cadets worked at the Bell Shelter warehouse, taking inventory and organizing EDS supplies, along with delivering them to different locations in California South.

Crestmont staff is supporting the Silvercrest residences in California South with essential items. Since it’s spring break, the children on campus have participated in a virtual vacation Bible school.

Last Sunday, Crestmont students and staff participated in a Spiritual Sunday via Microsoft Teams. This went well with live interaction and they were able to work out a few glitches. He said they will be up and running when they start conducting classes online.

Silvercrest Executive Director Susan Lawrence reported that a Silvercrest resident has contracted COVID-19 and is in the hospital. Two staff members and four other residents who visited him are under quarantine awaiting their test results.

The Silvercrest focus has been on food insecurity, Lawrence said. As a result, they’ve had numerous food deliveries from CFOT, the corps and the divisions. The Oceanside Silvercrest has partnered with the San Diego Food Bank, which has partnered with Islands restaurant, where you buy one meal and get one meal. Residents will be receiving two meals a week from that program. Because of all these efforts, Silvercrest staff feel that residents will have food for the next week or so.

Isolation is increasing as an issue. They are doing balcony singing at several residences, balcony exercise, hallway bingo and delivering bags with puzzles and activities.The Fresno Silvercrest has a Silvercrest channel that allows residents to view the surveillance camera in the lobby. Staff will sit there and make signs to communicate with them.

The call-in program Silver Line is up and operational, including a script with Scripture and prayers for volunteers. They have prepared consent forms in nine different languages and are looking for an Arabic-speaking volunteer.
To close, Hodder prayed, focusing on those individuals providing medical support. “Lord, we pray particularly today for the Christians in health care, that they will exhibit extraordinary peace, so that men and women who see them will ask about the reason for their hope. Father, give them opportunities to proclaim the gospel…Help us to be your faithful people at this time of crisis, help us to follow in the footsteps of Christ, who laid down his life for the sake of love. As we enter the week which is the culmination of our faith…help us to glorify his name as you equip us with everything needed for doing your will.”