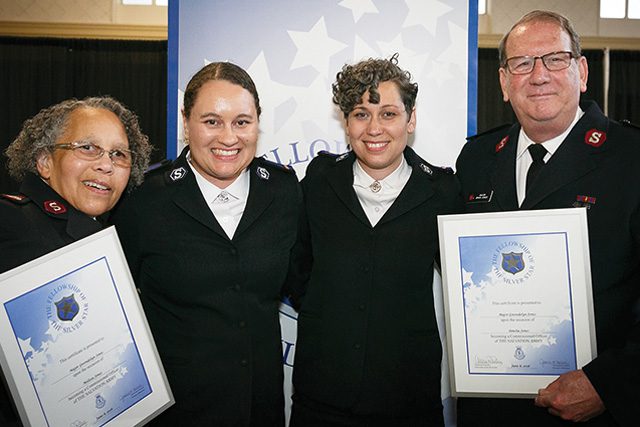 Major Gwendolyn Jones is the first African American officer trained and retiring in the Western Territory.

Major Gwendolyn Jones’ officership in The Salvation Army spans more than 40 years of service, and when she retires in 2019, she will become the first African-American officer to be trained and retire in the Western Territory.

“God called me to a ministry that would be able to fulfill a dream that I had to be able to be helpful to communities that were hurting and just needed a hand up to get to where they needed to be,” Jones said.

Commissioned in 1974 in the Followers of Christ Session, Jones brought a new voice to The Salvation Army Western Territory. She stressed that the key to effective service was through bridging.

She has strived to connect these communities to the Army’s resources throughout her career as an officer, “bridging the cultures and providing The Salvation Army programs that people needed in the community to help better their situations.”

Jones said one of her most memorable experiences in officership included being part of the African American multicultural committee, serving as a voice for minorities in The Salvation Army.

This experience, and the others that make up her Salvation Army legacy, have helped her achieve what she considers to be her biggest accomplishment as an officer of, “being able to speak into people’s lives and be able to encourage them to be the person God wants them to be.”

And she seems to have had this impact with people she has met along the way, including Major Tory Ross, Del Oro divisional Women and Community Care Ministries Secretary, and Mary Lawson, an attendee of The Salvation Army in Compton, California.

Ross met Jones at the College for Officer Training (CFOT) in 2001. She was a cadet at the time, and Jones was the Family Care Director.

“When I first met her, she was inspirational in that she would always encourage us,” Ross said. “She’s helped me to understand the importance of continually learning to reside in Christ through any challenges or circumstances that I might be faced with.”

Lawson met Jones in the 1970s at The Salvation Army in Compton, and spoke highly of what she brought to the community as an officer.

“She was a very strong officer who brought interest to The Salvation Army, especially with the kids,” Lawson said. “What she had to say carried a lot of value.”

Jones said doing God’s will is what makes officership so rewarding. Now, as she serves as Campus Chaplain at CFOT, she hopes to continue doing this before retirement.

“I just hope to have more opportunity to speak into people’s lives,” she said. “I want to provide a safe place for people to tell their stories where they can share their frustrations, have a place where they’re going to feel encouraged, and know someone is praying for them and trying to walk alongside them.”

She offered advice to Salvation Army officers of color.

“You have to put your armor on to do this work because you are going to need courage, strong self-identity and stamina to swim upstream, stand alone, decipher ignorance from evil, remove glass ceilings, and remain true to God and yourself,” Jones said.

“Stay true to your calling in Christ and do not let the naysayer distract you,” she said. “Make your relationship with Christ a top priority.”