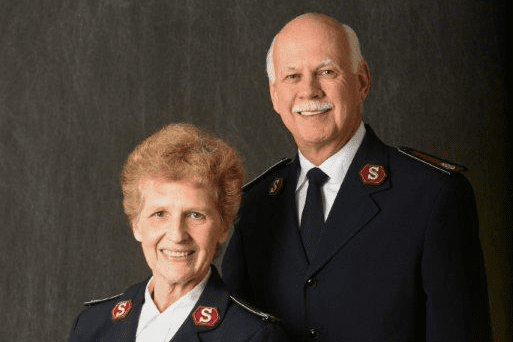 We can bridge a need for good across the U.S., Hudsons say.

National leaders Commissioners Dave and Sharron Hudson visited the West in mid-April, meeting with territorial leadership and employees alike during a trip home. The pair spent 40 years serving in the Western Territory before moving to National Headquarters in 2015. They took up their current roles—National Commander and National President for Women’s Ministries, respectively—in September 2017 and now, with more than 19 months at the helm, the Hudsons sat down with New Frontier Chronicle to share more about their ministry and motivations.

As The Salvation Army’s national leaders, what is the problem that you most want to solve?

Dave Hudson: I have to admit, when I first learned of The Salvation Army’s brand promise, “Doing the Most Good,” I didn’t like it. It sounded arrogant…but I think the operative word in there is good. You look around the United States today and there is a crying need for good. You have political polarization to a degree I’ve never seen. We have a government that has a hard time coming together. We have anger that’s just below the surface, and it doesn’t take much in any area for this anger to boil over. We’ve certainly made strides in race relations, but I think recent times have revealed that we have much, much further to go. We have violence…

So, I see this incredible need for good, and I think that the Army, and the Church overall, is in a strategic place that, if we choose, we could step in to this arena and begin to bridge the gap. I want to see communities coming together, and hopefully hear that is because of The Salvation Army’s work and us willing to stand in this divide.

Sharron Hudson: This is all of our mission, no matter if you have red on your shoulders or blue, are soldiers or employees, volunteers or advisory organization members, we all can have a place in helping a community, bringing hope and being a voice for the people that we serve.

You once said, “When we lose our mission, close up shop. People need to know for what you stand and that needs to be our guiding light.” So what does The Salvation Army stand for?

DH: I love our mission, to preach the gospel of Jesus Christ and to meet human needs in his name without discrimination. It’s not two missions, it’s not a mission statement with two parts. It’s one mission. If we don’t do the entire mission, I think we do disservice to all of it…

If you want to find Jesus, go to the poor, the brokenhearted, those that have been marginalized. We’re called to be there where need is, to find ways to meet those needs of individuals. And the single qualification is need. That’s it.

We don’t necessarily ask, “What got you here?” If a person is drowning in the ocean, we don’t interview them and say, “Well, what lessons can you learn to make sure that you don’t end up in the ocean?” You serve the person. You get them out of danger.

You mentioned that you’ve had many mentors. Why is that effort to positively impact an individual so important?

DH: Well, I think I can speak primarily in the first person on it. I didn’t have a strong, positive male figure in my life as a child. My mom was emotionally and physically abused and so she was emotionally unable to communicate love and care.

And so when Salvation Army officers were willing to drive across Portland, to have them invest that type of time, they in a not so subtle way let me know that I mattered, that I was worth something. A program or a facility can never have that much of a direct impact. It has to be that individual.

I’ve always wondered what the finance people thought when they saw the fuel bill…thinking, “Is this worth the investment? Is this worth your time?” I don’t know the answer directly, but I often say, how much is a national commander worth? Because without that investment there is no me.

I am forever indebted to them and to every one of the men and women, whether they’re officers or soldiers or volunteers, that care enough to invest in a person individually. Because I think there’s a real possibility that they’re making an impact that they may never realize.

How does faith impact you?

SH: Jesus said so many times to his disciples, “You don’t have any faith yet? Haven’t you been with me this long?” I really don’t know how a person can live life without having faith. As Christians we have faith in our Lord Jesus Christ and we reconcile to God through him. And I don’t think that I could live this thing called life without that. I doubt, just like the disciples did sometimes. I have to keep reminding myself that he’s helped me grow in faith every day.

DH: It’s my motivation; it’s why I want to do what I do. But it’s also my plumb line because none of us have a corner on truth. And I think if you spend too much time trying to get what truth is from too many places it can be more confusing than helpful. And so my faith and the Scriptures are my plumb line in life to help me to do the right thing and to be the right person.

What is one way that somebody could get more involved in doing good with The Salvation Army?

DH: I encourage people to open your eyes and look around. I’ll never forget a guy by the name of Mike who I met at the San Francisco Harbor Light. “Do you know the worst part about being homeless?” he asked. “Nobody knows your name.”

“Do you know what it’s like to walk down a street and have somebody see you coming and actually cross over to the other side of the street to just avoid you?” he said, “I’m a non-being.”…

I think it’s opening your eyes to the world around you…acknowledging somebody, saying a kind word…A smile. I think that’s a starting place.