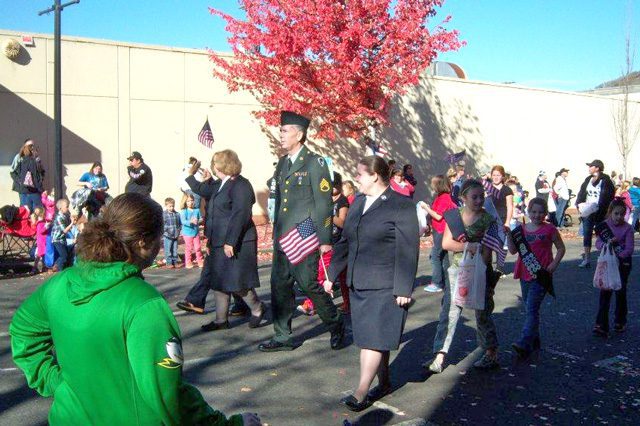 The Salvation Army in Roseburg, Ore., led by Corps Officer Captain Chris Freysinger, serves a small city of about 21,500 people in the Umpqua River Valley. The corps stays busy–just this week hosting a Dress-A-Child event, enrolling new soldiers and marching in the Veterans Day Parade.

Ninety-seven children enjoyed a morning of shopping for new clothes through Dress-A-Child, courtesy of The Salvation Army and Fred Meyer, Inc., on Nov. 7-8. This was the 34th year the Roseburg Corps has hosted the program.

Area elementary schools submitted the names of children eligible to participate in the program. On their scheduled day, children arrived at the corps and ate breakfast before heading to the Fred Meyer store, where every child had $125 to spend. Volunteer chaperones helped each child select new winter clothing, including coats, shoes and boots. When everyone finished shopping, they returned to the corps.

Freysinger credits Rosemary Brinkley, a Roseburg Advisory Board member, with the success of the event. After being involved with the program for many years, Brinkley is now in charge of it.

“What a blessing!” Freysinger said. “Through the Dress-A-Child program, one new boy came to Sunday School and other parents are interested in our youth programs.”

The Salvation Army participated in the Veterans Day parade, themed “In Honor and Gratitude of Those Who Liberated Kuwait.” Pringle, who saw active duty in Kuwait as a staff sergeant, changed from his new senior soldier uniform to his U.S. Army uniform and marched with the group.