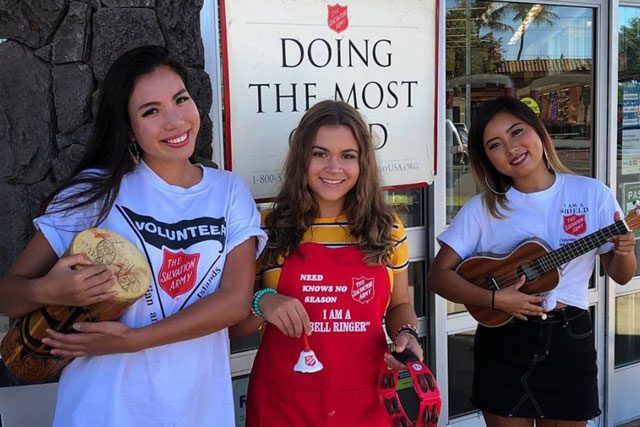 If you were to go to bed at night and wake up with only the things you had thanked God for that previous day, how much would you have? Parents teach us to say “thank you,” but for me it became more of an automatic response rather than truly reflecting and thanking others for the things they do. It was not until this past Sunday that I really understood the meaning of gratitude.

As my team was doing outreach in Honolulu’s Chinatown, I saw a man sitting down, curled up on the sidewalk. His arms were inside his t-shirt as he shivered back and forth trying to stay warm on a thin piece of cardboard. He looked up at me and I felt something tug at my heart. I was immediately engaged by everything he said. He told me how he used to play stringed instruments and valued music as a way to help him escape the harsh realities of his life.

At that moment a voice came over me: “Give him your sweater.” Immediately I took off my sweater and asked him if he would like to have it. His voice shook as he said, “Oh, no, I could never ask that of you.”

After hearing this tears began to fall from my eyes. I gave him my sweater and asked him if there was anything on his heart that was troubling him. He told me that his brother and two close friends had died in the past month. I was overwhelmed with compassion. He had to have such a strong spirit to endure that despite having no support from anyone. I began to cry harder than before, wishing I had more than a simple sweatshirt to give him. I prayed with him. I so wanted him to develop a relationship in Christ so that his soul could be filled with Jesus even though his physical needs were not being met. As I left I gave him a hug and thanked him for speaking with me.

Later that night, on the way back to Camp Homelani, I thought about how many other kind people there are who deal with those circumstances every day. It’s not fair and my heart cried out to God, asking “why?”

God responded: “If this is something that moves you, then why don’t you help be the change?”

At that moment, I decided that whatever I am doing after this program [Revolution Hawaii], it is going to involve giving back to the community where I live in any way I can. Gratitude is so important—if you do not have it then how can you spread God’s love to others? It is more than saying, “I am thankful for my family, friends and things.” Rather, it’s, “I am blessed in more ways than I can imagine and because of that I need to give my time and talents to those who have less, so that they can experience the joy I have in my heart through Jesus Christ.”

God is the ultimate provider. Let’s not forget this; instead, let’s embrace every precious opportunity to show our gratitude to Jesus through service to others, always remembering his ultimate gift to us—the gift of salvation.