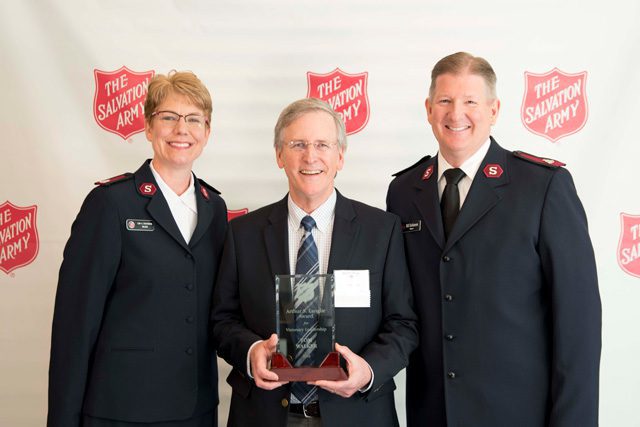 The award, named for a longtime Advisory Board member, honors an individual or organization that epitomizes leadership and selfless service to others. In keeping with tradition, Arthur K. Langlie—son of the late Arthur S. Langlie—presented the award to Walker. 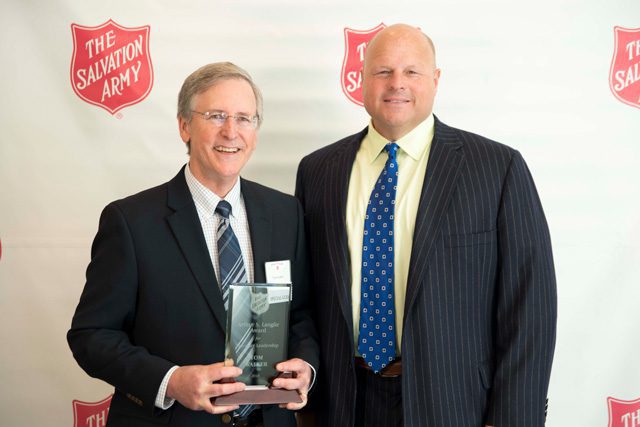 “On the eve of his retirement from The Salvation Army, it was fitting that Tom be recognized for his more than 23 years of dedication to helping countless people through Salvation Army services,” Northwest Divisional Commander Major Bill Dickinson said.

Working to fulfill the mission of The Salvation Army, Walker has overseen the inception and expansion of numerous programs throughout the Northwest. In King County alone, major projects included the women’s shelter in downtown Seattle, a client-choice food bank in Renton, safe housing for victims of domestic violence, transitional housing for graduates of the adult rehabilitation center, and a partnership with the city and county for year-round emergency shelters. Considering the other programs throughout the rest of the Northwest Division, it is possible that millions of individuals have been served—and maybe saved—during Walker’s tenure.

During his acceptance speech, Walker thanked the people “on the front lines”—officers, employees and volunteers—who facilitate the Army’s social services.

He also acknowledged the Army’s positive impact on his own life.

“It’s been a huge benefit to me to be part of an organization that does try to be its best self and looks for the best in others,” he said. “In social services we need that; we see a lot of people in chaos.”

He referenced times of chaos in Scripture, when God brought calm.

“That’s what we do in social services—it’s miraculous really. It’s holy work because it helps people become whole again, find their way home whether through or over or out of chaos.”

The award is a highlight of the Army’s Red Kettle Luncheon fundraiser, held each spring. Past recipients include Seattle Seahawks quarterback Russell Wilson, the Bill & Melinda Gates Foundation, and The Seattle Times Fund for the Needy.