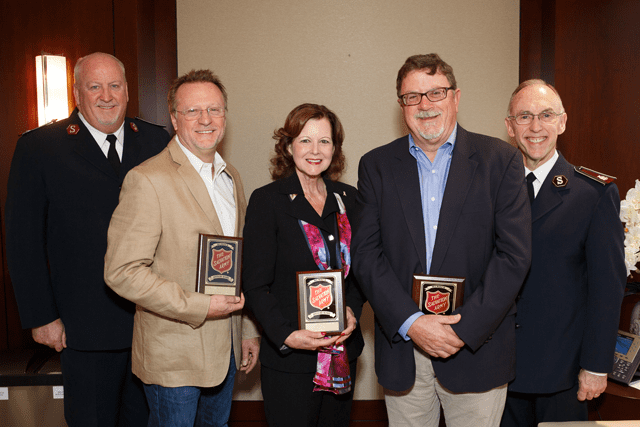 You may have heard of The Salvation Army National Advisory Board and of local advisory boards, which include business and community leaders who advocate for the Army and participate in the Army’s planning.

“Why not a territorial advisory board?” Western Territorial Commander Commissioner Kenneth G. Hodder said. “We have 9,000 employees, 1,200 officers and we serve millions of people. It only makes sense for us to have corporate executives, legislators and leaders in communication and business who want to help the Army involved in our decision-making.” Cooke is a writer, television producer, media consultant and commentator on Christian culture. Haack is President of Rancho Palos Verdes oceanfront hotel, Terranea Resort; The Salvation Army is new to her. Grape rancher Rick Osgood is Founder and former CEO of Pacific Growth Equities, Director of Wedbush Securities, and former Chairman of The Salvation Army Advisory Board of San Francisco.

Michelle Kerrick is the Managing Partner of Deloitte‘s Los Angeles practice, which handles audits for The Salvation Army. She will step away from performing audits to avoid a conflict of interest.

“The board’s goal will be strategic planning,” Hodder said. “Increasing consultation with other thought leaders within the territory [allows us] to make the best decisions for the Army in the Western Territory.”

The plan is to add four more members, for a total of 10 individuals—business, education and government leaders from across the Western Territory. Along with individuals familiar with The Salvation Army, the board will include those new to the Army, who will approach questions with a fresh perspective.

The board will meet three to four times a year. At each meeting, the members—provided with relevant information—will consider a specific question.

“Then we will ask: ‘What do you think is the best decision for The Salvation Army to make in this situation?’” Hodder said. Subjects might include utilization of property, modes of communication, personnel questions and organizational structure. The issues raised will always be major strategic questions.

“First and foremost, The Salvation Army is made up of people called by God to minister to the basic needs of people in Jesus’ name,” Hodder said.

With that said, he noted that it’s helpful to have advice from thought leaders outside The Salvation Army.

“These individuals in their corporate context will have dealt with that kind of issue in a large scale,” Hodder said. “We need the best advice they can give us on how to approach the situation.”

The Territorial Advisory Board will be one of the most influential of about a dozen advisory groups forming in the West; others will consider audits, risk assessment and investments. A retired leaders group will include past territorial and divisional leaders who will look at current situations; they have valuable experience to call upon. Another group, the Territorial Think Tank (known as the “Disrupters”) anticipates what work the Army should be doing 10 years from now.

“Where are the unmet needs?” Hodder said. “We’re serving people here; meanwhile, there’s a need elsewhere that isn’t being acknowledged.”

The whole initiative is designed to involve more people in the workings of The Salvation Army. “The more people involved in the process, the better our decisions will be and the more people will understand our decisions, thereby helping us all the way around,” Hodder said. “We can’t afford to measure in silos anymore.”