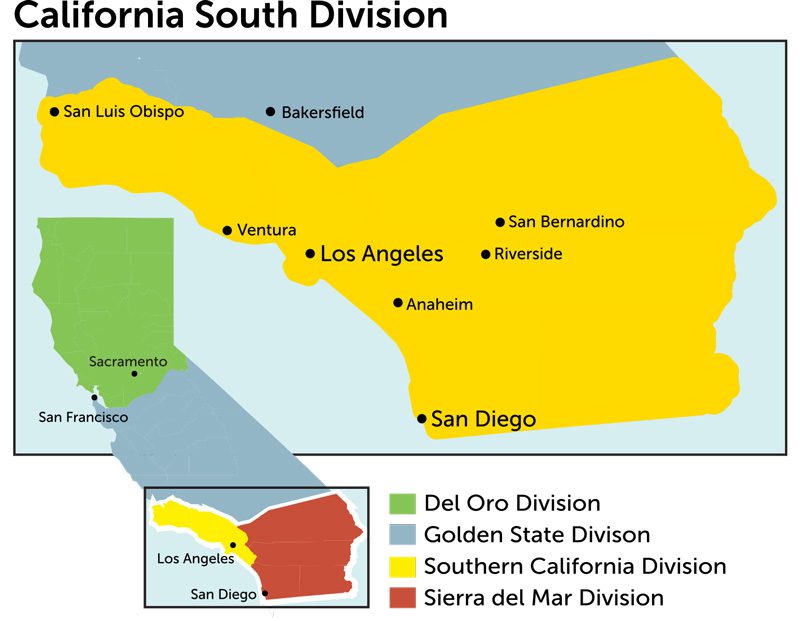 Leading the new division are Lt. Colonels John and Lani Chamness, who most recently served as divisional leaders in the Hawaiian and Pacific Islands (HIPAC) Division for six years. The Chamnesses have also worked as corps officers, Marshall Island coordinators and divisional youth leaders, among other roles, so they bring with them a bevy of experience. Of course, this appointment poses some unique challenges for all officers and staff working within it—something to which the Chamnesses are well attuned.

“I am truly excited for the opportunities we’ll have to connect and serve with the officers of the California South Division,” said Lani Chamness. “To see the work they are doing for the kingdom and helping to encourage connections in Christ excites me.”

“We really look forward to working with all of the officers, staff and soldiers in California South,” said John Chamness. “Obviously, we’re fairly spread out, so we need to make sure we provide good support and encouragement to all of the corps and programs across the division. That’ll be one of the biggest challenges.”

It’s a lot of ground to cover. That’s why the Chamnesses decided one of their first orders of business, after they settle in, is to hit the road.

“We want to try to visit every program, every corps across the division, at least so we have a picture of who people are and where they reside,” John Chamness said. “And hopefully we’ll be able to meet everybody, even if it’s just for a quick coffee or meal, and see what the unique challenges are in their communities so we can help them. The division exists for one reason only, and that’s to support the corps for effective ministry.”

As for overseeing the merger itself, that poses another set of obstacles entirely. However, the Chamnesses have experience to draw from, albeit on a smaller scale. During their appointments in Hawaii, two of the addiction treatment centers there had operated separately for decades. When they brought them under the same leadership, there were several notable outcomes.

“We were able to increase the number of people we assisted, and we also had a greater pull in the community when we talked about our programs,” he said. “When we bring together people and resources—not to mention, statistics—it can really help funders and government grantors, among others, see the reach and the impact that the Army has on communities. So I think bringing this all together underneath one division will really help us to be able to tell The Salvation Army’s story even better.”

At the end of the day, though, it’s all about two things, he said.

“This is going to be a lot of hard work, and it’s going to require a lot of adjustments as we bring the two divisions together,” he said. “Our focus is just to love God and love people, and it’ll all come together.”