My first year as an officer

You turned my wailing into dancing; removed my sackcloth and clothed me with joy, that my heart may sing to you and not be silent, O Lord, my God, I will give you praise forever.

So concludes Psalm 30 and my first year as an officer in Hoonah, Alaska.

I felt like I was coming home when I landed on the island of Chicagof in June 2011, and in the days that followed I believed I received the very best appointment in my session. Although I didn’t know them, I prayed for these very people the moment I began my application for officership and now have the benefit of seeing God’s answers.

What is special about Hoonah? Perhaps it’s the people and their strength in the face of adversity. This village of 760 had suffered many deaths over the previous 18 months, including two police officers slain in the middle of town. How does a pastor come into such a situation and walk alongside the pain of loss? You do it one step at a time with prayer and compassion, sometimes with silence, sometimes with words—and always with the touch of a hand.

I faced the challenges of my very first winter with snow and sketchy mail and travel services depending on the weather. Since I grew up on an island, I am not a stranger to isolation and its effects: the high cost of food, necessities and travel; and learning to do without conveniences such as department stores, auto mechanics, a bank, and fast Internet. However, these challenges are not insurmountable. You adapt by ordering online, using your imagination and walking by faith. It’s all about perspective and God is good at helping me focus on what is most important: people. I have to admit this new lieutenant was the source of many smiles and much laughter as I enjoyed delicious new foods for the first time, attempted to learn Tlingit words, and drove on snow and ice.

In December, after years of ill health, my mother passed away and I had the first-hand demonstration of God’s love through the people of my little village. People immediately came to comfort me. My loss was their loss. It is characteristic of the people of Hoonah to share in the suffering and the joys of each other. They have learned to be strong and endure. How very profound is God’s love when we allow it to flow freely through us.

This past year, I had the privilege of praying and sharing in song at a handful of memorial services and presided over three; my mother’s service in Hilo was the third. The Scripture above indicates trading one position for another. Removing the sackcloth was a sign of moving on. God impressed upon me to empower the people of the Hoonah Corps to move on. We are doing that one step at a time.

One year later, I still believe this is the best appointment of my session. In spite of the sorrow and personal pain of loss, I’ve chosen to allow God to turn my wailing to dancing, remove my sackcloth and clothe me with joy, that I may praise him forever.

May God be glorified and others come to know him.

Sharing is caring!
Tags:
My first year as an officer, Vol 30 No 10b 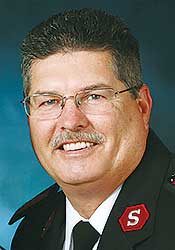 MY FIRST YEAR AS AN OFFICER

On the corner ” A commencement address for the “Friends of Christ” “