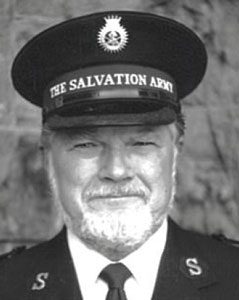 Major George White was promoted to Glory June 13 from Anaheim (California) Medical Center. Due to COVID-19, his family could not be with him physically; however, a continuous Zoom call allowed his entire family to comfort him in his final hours—his wife, children, grandchildren and great-grandchildren.

George Alverian White was born Dec. 2, 1929, at Swedish American Hospital in Rockford, Illinois, the middle child of nine children. He received his commission as a Salvation Army officer in 1949 with the Peacemakers Session. He also served in the United States Army.

He met his future wife, Shirley Baity, at a Friday night Salvation Army meeting in Kansas City, Missouri, where he was singing in a trio. At that time, he was stationed as the assisting officer in Kansas City, Kansas. He spoke with Baity for a while, but wouldn’t see her again until her commissioning with The Shepherds Session in 1954. They wed in 1955.

White served as a single officer at Emporia and Kansas City, Kansas; St. Joseph, Missouri; and Quincy and Decatur, Illinois. Later, in the Western Territory, they held appointments at San Diego, Ontario, Anaheim and Los Angeles, California; and Seattle, where they retired in 1994. In every corps appointment White was recognized for his work in the local community.

During his 25-year military career, he was stationed throughout the U.S. as well as in Kaiserslautern, Germany, and Saigon, Vietnam. He received several medals: National Defense Service Medal, Oak Leaf Cluster, Good Conduct Medal with 1st through 3rd Awards, Army Commendation Medal, Vietnam Services Medal with one Bronze Service Star, Vietnam Campaign Medal with 1960 Bar Device and Vietnam Cross of Gallantry with Palm.

White loved his two careers: The Salvation Army and the U.S. Army. Throughout his life, he touched the lives of many people with his passionate inspiration and Christ-like gift of service.

He was a gifted trombone and euphonium player, a talented vocalist and a lover of corny jokes and funny songs. He was a Denver Broncos fan and a die-hard Chicago Cubs fan. Most of all, he was a proud dad and a loving husband. He had a generous heart, an infectious sense of humor, and a knack for carrying on a conversation with anyone.

White is survived by his wife, Shirley; his children, Greg, Lori and Stacy; six grandchildren and 10 great-grandchildren.

A celebration of life service and a full military service with honors will be held at a later date. White will be buried at Los Angeles National Military Cemetery.