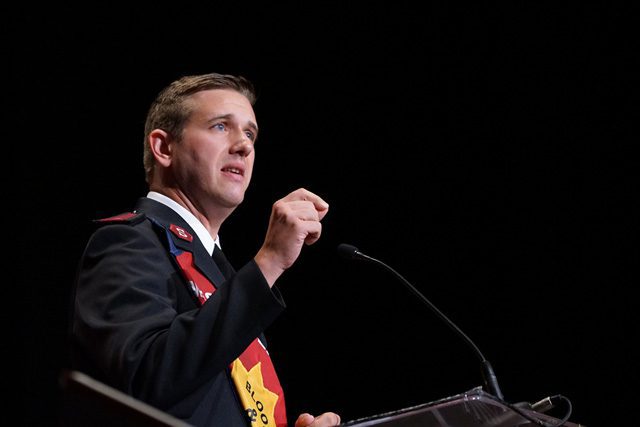 For large portions of my life, if you had told me that I would be up here, giving this address as a newly commissioned officer of The Salvation Army, I would have laughed in your face…and yet, here I am. Here we are. I attribute the fact that I am up here, mainly, to two things: the undeniable, extravagant and radical grace of God, and the legacy that was left behind and is being passed down at this very moment by Godly men and women.

Some of you may understand this already—we are who we are, and we find ourselves where we are in large part because of the legacy of others. One’s legacy can be monetary, it can set someone up to live luxuriously for the rest of his or her life, and provide financial stability for generations to come. I believe that one’s legacy can also be spiritual in nature—the choices, teachings, values and beliefs that a parent, grandparent or elder holds can easily shape the younger generations that they are in contact with. It is in the legacies that are left for us that we can see God weave himself in and through us as the great orchestrator.

I can see him working in the legacy of my distant relatives, the two Parkhouse brothers that came over from England to serve in The Salvation Army in the United States. One returned to England and the other stayed, and so his commitment to The Salvation Army trickled down through the generations of my family, which brings me here today. I benefit from the legacy of my late great-grandmother who, as a child of Swedish immigrants, attended the No. 2 Scandinavian Corps in South Chicago and showed me what it meant to forgive and to be forgiven. It was there that I accepted Christ at the age of five. I can see God working in the legacy being left to me by my grandparents, all of whom at one point in my life have been both a spiritual teacher and one of my best friends.

In fact, I have quite an interesting story I would like to share with you about one of my grandparents. You see, I always knew that I shared certain similarities with my grandfather, the now retired Major Bill Nottle, but it wasn’t until I came into training that the staggering number of similarities really started to intrigue me. My grandfather and I were both educators before we came into training, did you know that? My grandfather entered training with one daughter and had another while in training. I entered training with one daughter and had another over the course of my time at the College for Officer Training. His daughters—my mother and my aunt—are 22 months apart, and my daughters, Isla and Magnolia, are as well. We both play guitar; well, at least he did before he had an unfortunate accident with a snow blower. We both play brass instruments. We both are fond of road trips. And 52 years ago, he was the cadet giving this very address at his Service of Appointments.

Legacies. They can shape us, they can define us, they can set us on a certain path, and while I benefit from many positive legacies in my life, let’s be honest: legacies, the imprint that people leave on us, might not always be positive. We can be left scarred, broken, damaged and insecure because of the legacies that some people have left us. I might be up here in this spiffy uniform, pressed and polished, but I have a few of those legacies in my life, and there were times when those negative legacies spoke louder than the positive ones and vied to drag me deep into darkness.

I have a feeling that there are some people here who have felt that way too; maybe you feel that way right now. I want to tell you that for me, those legacies of pain and sorrow became my redemption story waiting to happen. It was in the midst of those dark legacies that others put into my life that God ignited his plan for me to find security, to find love, to find forgiveness, to find peace, to find mercy and grace…to find Jesus. He is there for you too. The author of Lamentations puts God’s legacy for you and for me like this:

The faithful love of the Lord never ends!

Great is his faithfulness;

his mercies begin afresh each morning.

I say to myself, “The Lord is my inheritance;

therefore, I will hope in him!”

Our session name is “Messengers of the Gospel”—the good news, the lasting and living legacy for all, the legacy of Jesus Christ. So as my first official speaking engagement as a commissioned lieutenant in The Salvation Army, allow me to share with you what Jesus has done. It might seem improbable, maybe even impossible to you that approximately 2,000 years ago a baby was born to a virgin in a small town in occupied Israel. It may seem even harder to believe that this baby that grew into a man who was the chosen Son of God, fulfilling prophecy after prophecy regarding his existence, his works, his life, and his death.

While he was on this earth, which can be confirmed in not just sacred texts, but secular histories as well, he laid down a new way to relate to the God ,who is behind the miracle of the known and unknown universe, who is behind reasoning, logic, creativity, science, music, poetry, art and love. He talked and taught about a way of relating to each other that embraces restoration, reconciliation, forgiveness, decency and community. He bent the natural, social and spiritual worlds to his will as he healed and made whole hundreds, fed thousands, loved the unloved, befriended the despised and embraced the lowly. He was crucified on a cross as an atonement for everything that had ever been done and would ever be done that could separate us from God because he loves us.

His mostly uneducated, and often slow to understand disciples, with the help of the Holy Spirit, somehow kept the early Christian movement alive, yet every one of them would be appallingly executed. The persecution that the early followers of Jesus endured was so intense, I would argue—and many scholars much smarter than I would argue—that if this was just a crackpot scheme crafted by a few con-artists or a belief system fabricated by a few zealots, it would have been doomed to fail. Something about the Christian movement had to be legitimate to survive. It would not have survived on man’s own doing.

We believe that “something,” was this: On the third day after Jesus’s crucifixion, He rose from the dead. Death has been beaten, sickness has been defeated, and sin has been conquered so that we might be restored to being at-one with each other and at-one with God. You could do all the research and become historically convinced that there might be something to this Jesus, but let me help you out. Jesus is still alive today; ask him to convince you and he will show up.

I get it. It can still seem just as improbable and impossible as his birth, but I promise you the legacy of Jesus Christ is a living and breathing one. I know this because he showed up in my life. He showed up in the lives of every single brother and sister that I proudly call a session mate, both those who are with me on stage and those who are not. It doesn’t matter what you have done. It doesn’t matter what has been done to you. Jesus is still extending his legacy of love, forgiveness and a life abundant to everyone who asks for it.

This is the legacy that every believer has been called to live out, to speak about, and to take with us everywhere and anywhere we go. It isn’t the work of just the officer, the pastor, the worship leader, or the apostle. It is the work of each and every disciple of Jesus. Help us reach those who need to hear about the legacy of Jesus. As you leave here, commit to leaving a legacy, an imprint of the love of God on your families, on your significant relationships, on complete strangers, on the left out and marginalized, through words and actions.