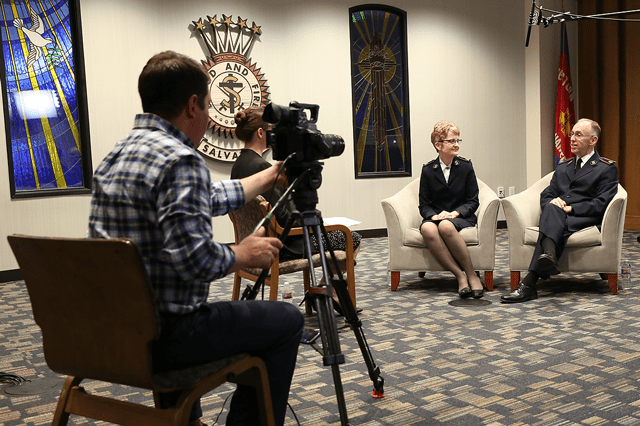 Christin Thieme, Editor in Chief: What have you seen and experienced in the West over the past 100 days?

JH: Well, we’ve done what we can to get around to see our Salvation Army family, so we have been all over the territory and we’re absolutely amazed at how many new soldiers there are, and how many new officers there are. As matter of fact, quite often, my husband says to the congregation, “If you have come to The Salvation Army within the last 11 years, please stand.” And it’s usually about 50 percent of the congregation.

KH: And that’s been one of the most exciting things. We are so proud of the Army—that its ministry has grown and flourished and developed in so many exciting ways. In terms of the kinds of things the Army does, in terms of how it’s accomplished, it’s just a delight to see the way the Lord is using it.

CT: On a more personal level, why are each of you in The Salvation Army?

JH: Well, I was saved to serve, and there’s not a better church to be in than The Salvation Army because they give us every opportunity to meet human needs and be creative in doing so.

KH: Some years ago, we were asked to put together mission statements, so I put together my own mission statement, and as a result of that, every month I’d write it down. And it is that “I will serve my God, to whom I owe everything, my family whom I love limitlessly, and the Army to which I am called.” So the Army is a part of my own personal priorities, my own sense of what God has in store for me and my life every day. I can’t imagine doing anything else.

CT: So, as officers, you’ve had a lot of experiences and a lot of opportunities for ministry. Is there anything that you feel like you weren’t necessarily trained for, that you had to learn along the way?

JH: I think for me, I’ve learned that love is more important than training. That when you go into a culture and you’re an outsider and you don’t speak the language, a simple smile, a hug, a good deed, communicates the gospel like nothing else could. You could be a pretty good preacher, but if you don’t love your people, the ministry fails. That’s probably what I’ve learned in the last few years.

CT: What can we do to better equip cadets today for training, so that they’ll be both ready for ministry and have the business acumen that they’ll need to thrive as officers?

KH: That’s a terrific question. I think the best answer is to say: If you feel God is preparing your heart and your mind to be a Salvation Army officer, adopt a high view of officership. By that I mean, you should begin to view the future as being something very sacred and very significant. It is in no way a job; it is not a career; it’s not a choice; it is in fact a calling. So that everything you do, whether it is educationally or financially or psychologically, in terms of your family, whatever arrangements you feel you need to make, do it with the understanding that what you are doing is very, very special. And that you have to be your very best in every way in order to fulfill that call that God is giving you.

CT: As leaders in the West, what do you see as your vision for the Western Territory in the days ahead?

KH: There are so many possibilities when you talk about vision because the world is changing so rapidly and in so many fundamental ways. The speed with which it is changing is increasing. So, in thinking about, in the light of this 100 days, what would be my vision, I would have to say that there is no better vision, than Jesus Christ himself. Paul wrote in Philippians, in the third chapter, “I want to know Christ.” So, themes will change and emphasis will vary; as the society develops, the Army is going to have to adapt. But in terms of vision, if we can make Christ known, we will succeed.

JH: We can have very successful programs, we can have our corps filled with thousands of people, but if people aren’t finding Jesus Christ, we are a complete failure. So, the world for Christ, more souls.

CT: How do we go about engaging a younger demographic of Americans to be a part of The Salvation Army and to be engaged with us?

KH: This generation, the millennial generation, wants to be shown a way that they can do something. And make a difference. And that’s The Salvation Army. We don’t sit around, we don’t simply write papers, we don’t simply hold seminars; we do something. So, if we can convey the sense that if people want to have an impact on the world, that one of the best ways to do it is through the Army, there will be no stopping the Army from meeting more needs.

CT: How do you spend your time when you’re not in the office?

KH: Well, when we’re not in the office, I love to read. I love to read history and theology and sociology books. So, I do a lot of reading, and I do a lot of walking. But then of course, my greatest energies and bulk of my time is given to the family. When I have an opportunity to take my wife out for dinner or spend time with our daughter or our son-in-law, those are the ways we like to spend our free time.

JH: I like to write. I also right now am getting my master’s in religion. So, a lot of time is spent in homework. But, I too like to spend time with my family, and I love caring for my husband and my home and those that I love.

CT:  What is your message for officers and soldiers and employees and members? What would you want to say today to those who are a part of The Salvation Army and the Western Territory?

KH: Never give up. You know, Winston Churchill spoke at the Harrow School on one occasion, and that was the total sum of his speech: never, never, never give up. And, that’s often the message that we have to hear because there are enormous obstacles that we face, there are enormous difficulties. We are mindful of those. There are financial limitations, there are personnel difficulties. Sometimes it’s difficult to create alliances in the community that you think are going to benefit the ministry of The Salvation Army. But the Lord has ensured us victory. He has promised us victory, and there has never been an occasion in which he has ever let us down—individually or as a movement. So, never give up; your victory is already assured, and the Lord is going to sustain you and support you in that.

JH: And I would just like to say: thank you. You know, we are the body of Christ, and it takes every one of us to do the work of the Lord. And those who clean the church hall on a Saturday, to those who are out on the front of the platform, the Lord needs all of us.
Sharing is caring!
Tags:
Commissioners Kenneth and Jolene Hodder, Interview, Vol 35 No 06, Western Territory