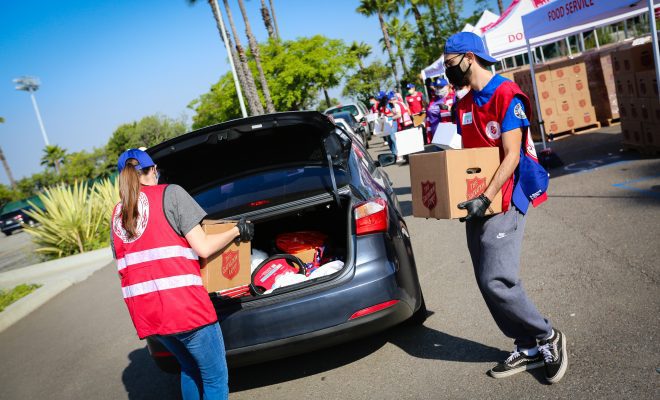 When The Salvation Army began responding to COVID-19 in March 2020, there was no way to know the sheer breadth the response would take. Now, a year later, the need remains great, and the response isn’t over. The Salvation Army is still providing food, rent/mortgage and utility assistance, lodging and emotional and spiritual care, among other efforts. To date, The Salvation Army has provided more than 5.9 million meals, 848,000 food boxes and over 900,000 nights of lodging through rent/mortgage assistance to those in need in the West during the pandemic.

Many of the needs The Salvation Army has met over the last year weren’t unique to the COVID-19 pandemic. Helping those in hunger, poverty and homelessness has been central to The Salvation Army’s ministry since its start in 1865. While pandemic safety measures have meant many of the traditional methods of meeting these needs weren’t possible, The Salvation Army adapted.

Here are 10 new ways The Salvation Army met old needs over the last year during the COVID-19 pandemic.

In the pandemic, gone were the communal meals and food pantries of the past. Instead, drive-through food pantries took center stage at corps and service centers throughout the West, buoyed by the support of local partners and a gift from the Church of Jesus Christ of Latter-Day Saints (LDS). From the LDS summer gift, 24,500 food boxes were distributed across the West in more than 30 drive-through events. In the Portland, Oregon, area, The Salvation Army launched Operation Share Hope, the coordinated effort of three corps to reach more people in need for food distribution. The effort, which spanned several months, served about 1,400 families a week.

The Golden State Division’s Holiday Meals program has been continuously running for more than 60 years, but with COVID-19, fewer volunteers wanted to come out, and combined with the fact the routes for the nearly 5,000 meals were manually laid out, it was looking to be quite a challenge. Volunteer manager Melissa Doppler worked with HERE 360, a location data company to use their technology to plot out the some 200 routes volunteers take for Thanksgiving and Christmas meal deliveries. After lots of teamwork, the end result trimmed significant time off volunteers’ journeys, and streamlined the holiday meal service. Doppler said one volunteer gave particularly positive feedback. “She was just so thrilled,” Doppler said. “She said… ‘My family and I volunteered on both Thanksgiving and Christmas and they ran like clockwork. We’ve been volunteering for about 30 years. And this was definitely the best experience ever.’”

New seasonal assistance software made aspects of the Angel Tree program traditionally done in person, virtual. Potential clients could access the online application from home or any mobile device, which helped to put new clothes and toys under the tree for children who would otherwise go without. The software allowed angels to be placed for adoption online, and donors to use the online “Angel Kiosk” to enter the angels they selected.

In Los Angeles, The Salvation Army’s COVID-19 housing efforts focused on manning a series of hotels with Project Roomkey, a FEMA-approved effort to provide self isolation via hotel rooms for people experiencing homelessness. California South Division Interim Social Services Director Anabel Sanchez said clients are referred to the hotel shelters, including the 400-bed Grand Hotel shelter in Downtown LA, through an outreach system, with a portion of the clients coming in from other shelters that are congregate settings that lost space due to social distancing. Similar measures were taken at Seattle’s William Booth Center, which was among the first in the state of Washington to utilize CARES Act funding in order to safely shelter some of its most vulnerable veteran residents in a local hotel. 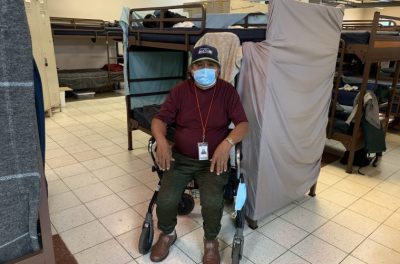 Seattle’s William Booth Center is recognized nationally by the VA as best practices during the COVID-19 pandemic.

The Salvation Army in Anchorage, Alaska, set up temporary housing for children whose parents were coping with the virus. Located on The Salvation Army Family Enrichment Campus, the building, which was being used as a 12-bed women’s residential treatment facility, was converted into a children’s shelter in response to the request from the city. Women at the treatment facility were moved to another building. “During times like this, it can be scary for parents who don’t have a circle of support if they are faced with contracting COVID-19,” said Major Pamilla Brackenbury, The Salvation Army Alaska Divisional Director of Women’s Ministries and Divisional Secretary for Program. 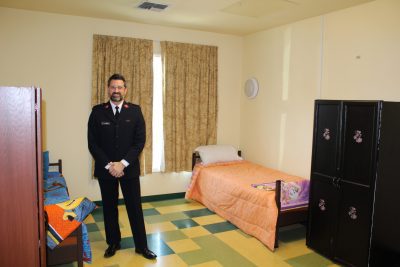 The Salvation Army in Anchorage sets up temporary housing for children whose parents are coping with the virus.

When restrictions limited in-person worship services, the Honoka’a (Hawaii) Corps held drive-in church. The corps building has a wide lanai on two sides suitable for the service. Envoy Gary Todd sent a text message to congregation members, which gave people the necessary details and concluded with: “Hear prayer requests, testimonies and a gospel message to enrich you spiritually. Remain socially distant and be blessed this Sunday.” Ten people came to the first drive-in worship—a significant number in the small town of 2,700 residents. In Hemet, California, The Salvation Army got the last-minute green light from the city to host a drive-in Easter service. Over 20 cars full of families parked in the corps parking lot, listening to the radio for the transmitted sermon and music. Following health guidelines, attendees waved to each other, not leaving the cars, and even honked car horns for “amens.”

Learning from corps who held virtual Vacation Bible School, the California South youth department helped three corps create a shared virtual VBS, themed “Intensamente Con Jesus,” based on the movie “Inside Out.” The collaboration between the Hollywood and San Fernando Valley Corps, and the Phoenix (Arizona) Maryvale Corps from the Southwest Division helped bring some sense of normalcy to kids stuck at home, and expanded The Salvation Army’s reach—corps reported participants tuning in from places including the Northwest Division, Florida and Chile. A grandmother in Mexico saw the video, purchased the supplies and gathered her grandchildren around the table for VBS. 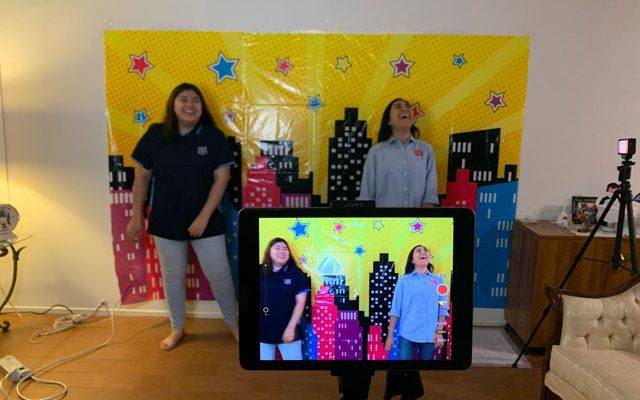 Like so many annual traditions, COVID-19 has changed how The Salvation Army can hold VBS.

Throughout The Salvation Army, hotlines rose in popularity as a means by which to give support while adhering to social distancing measures. The Intermountain Division’s call center, covering four states, received about 1,100 calls looking for rental, utility, food and emotional and spiritual assistance a day—a number it would usually receive in a month—and in addition to calls to the national “hope line” call center. At Territorial Headquarters, Director of Officer Resources and Development Sarah Bentley launched the Silver Line, a toll-free phone line seniors could call for emotional and spiritual support—and a connection to practical support as well.

Salvation Army camps throughout the West welcomed beneficiaries of the Adult Rehabilitation Centers for adapted work therapy and recreation. Since the thrift stores that fund the West’s 18 ARCs closed for part of the pandemic, much of the program’s work therapy component was not possible. Sober recreational activities were also limited. Many ARCs scheduled weekly visits to their nearest Salvation Army camp so beneficiaries could work on low-budget projects like trail maintenance and deep cleaning and have fun afterwards outside, too. “They love it,” said Santa Monica ARC Administrator for Program Captain Tanya Pemberton. “They love to work out, and they want to help the kids and they know that this is helping the camps, so that they can have kids here safely on the trails…I like to bring them out here so they can see what The Salvation Army camp is. So when they go home to their kids, they’ll be like, ‘kids, you have to go.’” 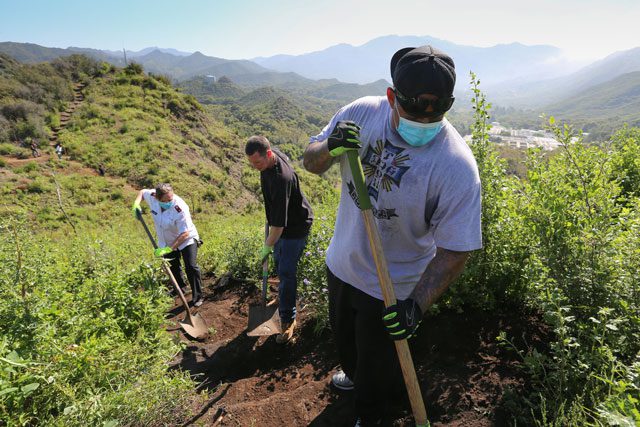 Beneficiaries from the seven ARCs in Southern California traveling to camps in the California South Division for work and play during COVID-19.

Trying to meet the need for community, even from a distance

Many seniors who live by themselves stay busy in community, especially at The Salvation Army’s Silvercrest residences for seniors. In Chula Vista, California, Karin Ingrande initiated a creative way to keep seniors engaged and active—balcony sessions. As the IWISH Resident Wellness Director at the Silvercrest, Karin held weekly outdoor concerts from the parking lot, even distributing sheet music to each resident’s door. “The residents are thriving because of it. At first, it was something new to them. They didn’t know how to take it, but now they realize that we’re that link for them,” Ingrande said. 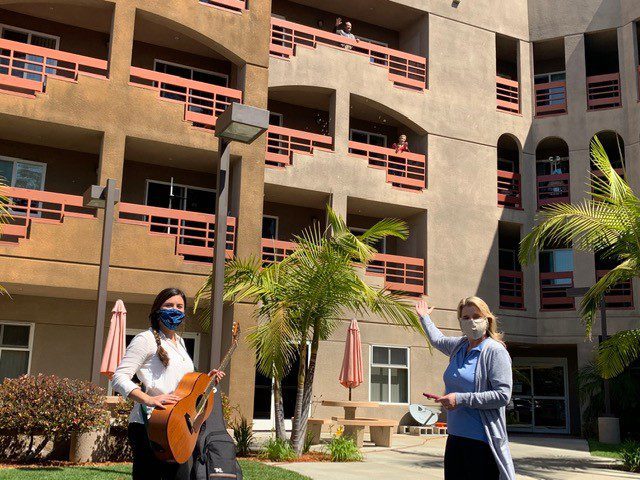