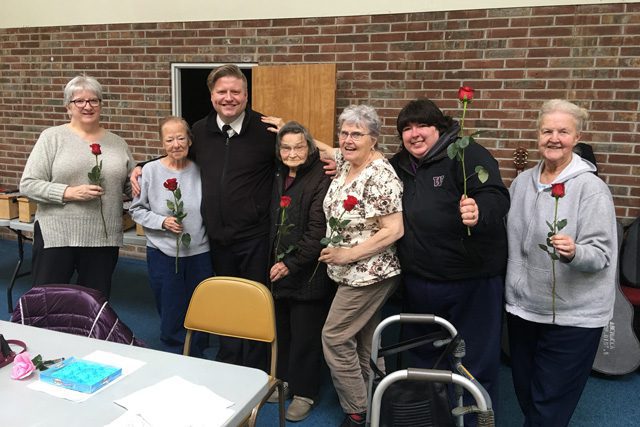 Women’s ministry from a male perspective

Lt. Lincoln Hawk credits his mother for his love of corps programming.

“They were a bit confused,” Lt. Lincoln Hawk said about the members of a group he leads at the Grays Harbor (Washington) Corps: Home League.

Hawk admits he has taken on an unusual role for the male half of a corps officer team by leading the corps’ women’s ministry. It’s a decision he and his wife, Lt. Claire O’Brien-Hawk, made together when they were commissioned in 2018.

The couple agreed that Lincoln Hawk would lead the Home League meetings while Claire O’Brien-Hawk would offer spiritual support and counseling to the women. In this way, Hawk said, they became partners in the ministry. “I love creating program and Claire loves listening, praying for, and being encouraging to the ladies at the corps,” he said.

Hawk said he has a passion for corps programming, instilled in him at a young age by his mother, Major Denise Hawk. And despite the initial confusion, Hawk says it’s love that won the corps women over.

“Lt. Lincoln Hawk has given the program a fresh new face,” said Soldier Ruthann Carlson, who has attended Home League for more than 60 years. “Women interact with with men differently. To hear a man’s point of view on things is quite refreshing…Things that I always saw in a certain way, I’m seeing in a new light. It’s been exciting.” Despite the obvious—he’s not a woman—Hawk said he hasn’t had to deal with many challenges related to that. If something of a sensitive nature does come up, he turns to his wife.

“It’s good that I have my wife as my teammate…I can rely on [her] wisdom and testimony,” he said. “People can always relate to people, and that works in my favor as a male leader of a woman’s group.”

When Hawk was a young teen in the mid-90s, his parents were Riverside (California) Corps Officers. The Home League group was “enormous,” Hawk said, and his mother often asked for his help. He decorated, participated in activities and talked to the women.

“They were so supportive and encouraging to me,” Hawk said. “I loved hearing the stories and testimonies of these ladies. They changed my life for the better.”

Later, as youth director at the Long Beach (California) Citadel Corps, Hawk continued his involvement with Home League, leading it several times a year. Through his involvement, he built a bridge of support for the youth programs.

“I had Home League ladies teach my youth Sunday school classes, volunteer at vacation Bible school and youth retreats. The ladies became a vital part in the lives of the youth at the corps.”

All this was in preparation for where he is now, he said.

“It is like the Lord had been training me all those years to finally become an official Home League leader,” Hawk said. “I love women’s ministry. I’ve seen first hand at what it does to the life of each woman that walks through the doors. Just like my mother did 20-plus years ago, I plan on making every Home League a memory that each lady will never forget.”

To that end, he sticks with the traditional “worship, education, service, fellowship” format for Home League. He said he likes to get the women talking about themselves, and wants each woman to feel important.

“I always try to create programs where they feel like they have a voice,” he said. “Every week my goal is to tell these ladies that they are special, and valuable to the community. I always have a song book chorus to sing and I always end my programs with trivia and prizes—even if the prize is something small like a candy bar. They always look forward to trivia time.”