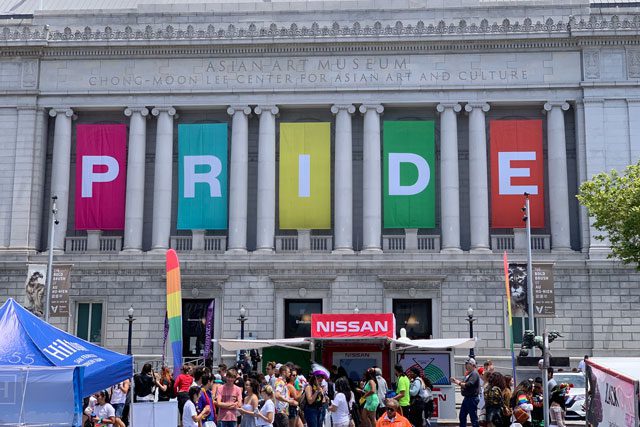 Why The Salvation Army has a presence at Pride events

When people see The Salvation Army booth at San Francisco Pride, they often do a double-take.

The booth, now in its third year, is run by Golden State Division staff, officers and volunteers, who dispense sunscreen, water and information, along with the message from 1 Corinthians 13:4, love is kind. This year’s effort also included a prayer request box and a sign that read “free hugs.”

The booth is part of the Army’s continued participation in Pride-related events throughout the Western Territory to spread positive messages of love and to correct misinformation that exists regarding The Salvation Army’s relationship with the LGBTQ community.

San Francisco Advisory Board member June Sargent has volunteered with the Army’s Pride booth several times to promote The Salvation Army’s commitment to serve everyone without discrimination, regardless of age, race, religion or sexual preference. Over the years, she has watched the effort’s positive impact grow.

“Every conversation I had this time was very positive. People were more aware that we are serving the LGBTQ community without discrimination, particularly in San Francisco,” Sargent said. “The most touching thing was the little prayer box we had in our booth—while some people were putting prayer requests in, most put in donations. They said, ‘We believe in what you’re doing, and we want to help you.’ I love the fact that that happened.” Like in years past, the weather for San Francisco’s Pride weekend was sunny, according to Sargent. Offering free sunscreen,  a practice inspired by The Salvation Army in Chicago, proved once again to be a good way to draw the attendees in and talk to them about what the Army is doing.

“It is a very fun and colorful event…you get to meet a lot of great people and tell them about the wonderful work the Army is doing in San Francisco and beyond,” Sargent said. “The free sunscreen is loved—and needed—by everyone.  We’ve been told we are ‘lifesavers’ more than once.”

Golden State Director of Communications Jennifer Byrd, who also participated in the booth, said she was losing her voice after engaging with so many people throughout the weekend.

“It’s great to have an opportunity to answer any questions people have, like ‘I saw this thing on the internet [about The Salvation Army’s views]’ or, ‘I read this thing,’” Byrd said. “We get the opportunity to clarify and correct any perceptions and misinformation that’s out there and to talk about the work the Army does in the community and also that The Salvation Army is out to help.” According to SalvationArmyTruth.org, because LGBTQ Americans living in poverty often experience homophobia and transphobia, many become homeless. A majority of LGBTQ people experiencing homelessness end up on the streets before they turn 18, and one in four is homeless before turning 16.

“If they see the shield and they don’t feel safe coming to us for help, that’s not a good thing,” Byrd said. “We really want people to know that we’re here to help.”

At the booth, signs reiterated the Army’s mission to serve others without discrimination, reading: “Regardless of race, ethnicity, sexual orientation, gender or any other factor, The Salvation Army is here to serve San Francisco.”

One of Byrd’s most memorable interactions was with a teacher from Michigan who approached the booth and was confused by the Army’s presence at the event, because she heard The Salvation Army doesn’t hire people from the LGBT community. She left with the knowledge that was not the case, and she told Byrd she’d go home and tell her students about the Army’s work.

“Our goal is just to be visible, to be present, to have conversations with people who misunderstand what we are about or who have been led to believe that we don’t serve all people,” Golden State Divisional Commander Major Darren Norton said. “We share God’s love with all people, and that we’re here to do that in love and to serve without discrimination.” While Norton is relatively new to San Francisco, he saw how valuable the Army’s participation at a Pride event could be, last year in San Diego.

“Being in San Francisco, the dynamic is very interesting here because there’s been a lot of misunderstanding about our role and position,” Norton said. “It’s important for us, if we’re going to expand our efforts, to expand our impact on homelessness, that our underlying message is understood, and it’s another opportunity for us to clarify who the Army is and why we exist.”

The Alaska Division participated at PrideFest in Anchorage the weekend of June 28, something it began in 2014. In the California South Division, the San Diego Regional office will have a booth at the city’s July Pride event, held July 12-14, with branded giveaways and information on Army programs.