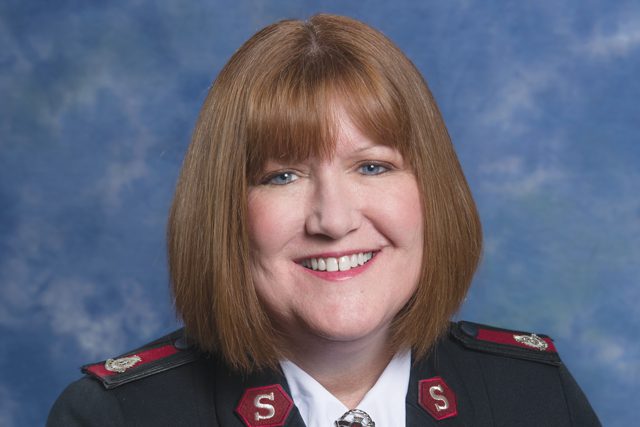 Where are they now?

Long-serving Western Territory officers were recognized during the 2016 Commissioning weekend as follows: 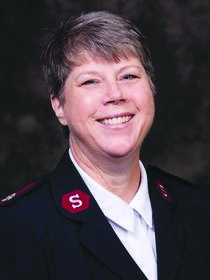 Commissioned in 1991 with the Servants of Jesus Session, Major LeAnn Trimmer celebrates 25 years of service in The Salvation Army in 2016. Currently the Adult Rehabilitation Centers Command (ARCC) secretary for business, she will be administrator of the Pasadena, Calif., ARC as of June 29.

Trimmer said she realizes the value of her service as an officer is “in the lives that are impacted for the Kingdom of God…My life as a believer and as a minister of the gospel is summed up in a simple thought: we are called to love God and love others—simple words that take a lifetime to master.”

To new officers, she recommends Hebrews 12: let us run with perseverance the race that is set before us, looking to Jesus the pioneer and perfecter of our faith (Heb. 12:1b-2a NRSV). “Many things could distract you,” she said. “Keep your eyes on Jesus and the calling God has placed on your life to be faithful servants of the gospel. Never give up on a bad day. And be faithful with what God entrusts to your care.”

Her life verse: But we have this treasure in clay jars, so that it may be made clear that this extraordinary power belongs to God and does not come from us (2 Cor. 4:7).

Commissioned in 1980 with the Proclaimers of Salvation Session, Major Clem Leslie celebrates 25 years of service in The Salvation Army in 2016. He currently serves as Tucson, Ariz., area coordinator.

Leslie said his understanding of officership has changed with age. “I understood officership was a calling but all the ambition that comes with a career seemed to dominate my thoughts,” he said. “As I have matured in years and more importantly as I have matured spiritually I understand that it is not about where or what my appointment is but rather how can God be glorified in my service for him. In other words, God will use me wherever man places me.”

To new officers, Leslie said: “Be sure of your calling, preach the Word, love your people, and live a life of holiness.”

His life verse: I am crucified with Christ: nevertheless I live; yet not I, but Christ liveth in me: and the life which I now live in the flesh I live by the faith of the Son of God, who loved me, and gave himself for me (Gal. 2:20 BRG).

Commissioned in 1981 with the God’s Soldiers Session, Commissioner Carol Seiler celebrates 35 years of service in The Salvation Army in 2016. She currently serves as territorial coordinator for strategic mission planning in the USA Central Territory.

“I see the officer as someone who has the opportunity to be entrepreneurial for The Salvation Army in the pursuit of mission responses to the spiritual, physical and social needs of individuals and communities, while also being diligent about respecting the elements of organization that make that entrepreneurial approach possible,” Seiler said. “Officers are imperfect beings, not better or worse than other Christians, working in the unique avenue of The Salvation Army, alongside employees, volunteers, professionals and participants to demonstrate the presence of God on Earth. Reconciliation, restoration and redemption are outcomes.

To new officers, she said: “Pick your battles wisely, do your homework and keep the focus on the people and communities we serve.”

Her life verse: Therefore, since we are surrounded by such a great cloud of witnesses, let us throw off everything that hinders and the sin that so easily entangles. And let us run with perseverance the race marked out for us, fixing our eyes on Jesus, the pioneer and perfecter of faith. For the joy set before him he endured the cross, scorning its shame, and sat down at the right hand of the throne of God (Heb. 12:1-2 NIV).

Commissioned in 1976 with the Overcomers Session, Major Warren Dabis celebrates 40 years of service in The Salvation Army in 2016. He currently serves as corps officer of the Centennial (Colo.) Corps.

Reflecting on his service, he said, “practical knowledge from firsthand, in-the-field experiences has been my best teacher.”

To new officers, Dabis said, “The God who called you into full-time ministry as a Salvation Army officer will never leave or forsake you. You have responded to God’s call; thus, never forget that he who called you into his service will equip, encourage and sustain you from your first day as an officer to the day you retire. Always look to your Officer’s Covenant that says: ‘to live to win souls and make their salvation the first purpose of my life.’ Clinging to this statement will carry you through all opportunities and challenges of ministry.”

His life verse: Trust in the Lord with all your heart and lean not on your own understanding. In all your ways acknowledge him and he will make straight your paths (Prov. 3:5-6 ESV).

Commissioned in 1991 with the Servants of Jesus Session, Major Cindy Dickinson celebrates 25 years of service in The Salvation Army in 2016. She currently serves as corps officer at the Phoenix South Mountain Ray and Joan Kroc Corps Community Center.

“Twenty-five years ago the words ‘I’ll not turn back’ were my personal promise [to God]. Through [the years], the words of that song have served as a reminder that I am a Servant of Jesus. No matter the appointment or the circumstances God appoints me to, no matter the joys or the challenges, I will not turn back for I am called to live, to love and to save the lost.”

Dickinson would encourage new officers to be open to all that God has in store. “Allow God to use you wherever you are appointed. You may not always understand why you are where you are, but God has the big picture in view and he has you in the palm of his mighty hands.”

Her life verse: Rejoice in the Lord always. I will say it again: Rejoice! Let your gentleness be evident to all. The Lord is near. Do not be anxious about anything, but in every situation, by prayer and petition, with thanksgiving, present your requests to God. And the peace of God, which transcends all understanding, will guard your hearts and your minds in Christ Jesus (Phil. 4:4-7 NIV).

Commissioned in 1976 with the Overcomers Session, Major Jack Phillips celebrates 40 years of service in the The Salvation Army in 2016. He currently serves as Oakland, Calif., ARC administrator and ARC Bay Area coordinator.

Reflecting on his service, Phillips said, “I understand now that I am not an individual working alone to accomplish God’s will but part of a team working together to accomplish his will in both my personal life and my ministry.”

To new officers, Phillips said, “Be patient, be kind, be prayerful, be faithful in all things, work hard, and God will honor your service.”

His life verse: My son, do not forget my teaching, but keep my commands in your heart, for they will prolong your life many years and bring you peace and prosperity. Let love and faithfulness never leave you; bind them around your neck, write them on the tablet of your heart. Then you will win favor and a good name in the sight of God and man. Trust in the Lord with all your heart and lean not on your own understanding; in all your ways submit to him, and he will make your paths straight (Prov. 3:1-6 NIV).

Sharing is caring!
Tags:
Commissioning 2016, Officership, Vol 34 No 06, Where they are now 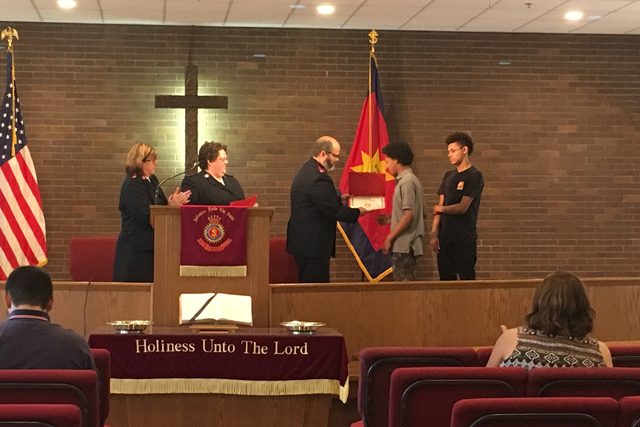