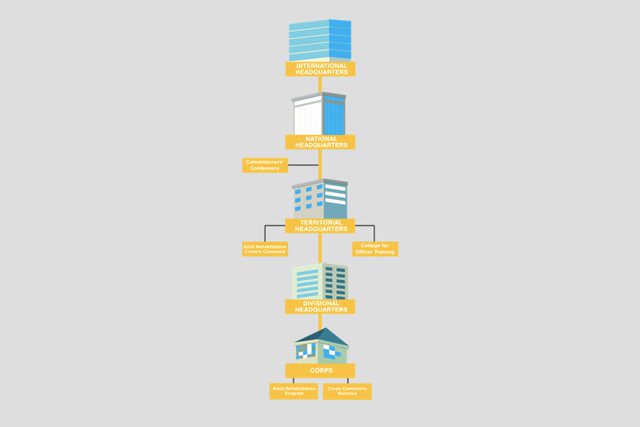 What does The Salvation Army’s corporate structure look like?

Legally, each of the four Salvation Army territories in the United States functions as a tax-exempt corporation with the National Commander as the Chairperson of the Board. Territories are made up of units known as divisions. There are roughly 40 divisions in the United States and each is headed by a divisional commander. Divisions consist of corps, the basic units of The Salvation Army. The functions of the corps include religious and social services, which are adapted to local needs. Each corps is under the supervision of a corps officer.

Nationwide policy is the responsibility of the Commissioners’ Conference, whose membership includes the national leaders, the territorial leaders, the national chief secretary and the four territorial chief secretaries. Standing commissions devise and evaluate strategic initiatives to further the mission and ministry of The Salvation Army and then make recommendations to the Commissioners’ Conference.