More than 100 cadets, training to become officers in The Salvation Army, filled the platform of Pasadena’s Ambassador Auditorium as the 61 Proclaimers of the Resurrection joined the 47 Friends of Christ for a service extending a “welcome to the college and the territory.” The event followed a catered dinner and a red carpet entrance filmed by the territory’s new international communications vehicle, savn.tv—Salvation Army Vision Network.

Following the traditional entrance of territorial and divisional leaders, the new cadets were introduced and marched down the aisle. Once assembled in mass, the 61 session voices individually identified him or herself with a simple sentence that began with: “I was once…” and ended with the statement: “Now, I’m a Proclaimer of the Resurrection.” With this statement each cadet affirmed membership in a worldwide fraternity of Salvation Army cadets and firmly identified as a future officer.

Waiting on the Lord

Commissioner Carolyn Knaggs, territorial president of women’s ministries, spoke of Accepted Candidate Lura LeMar, who, with her husband, Cadet Sam LeMar, was accepted to begin training with the session. However, she was promoted to Glory in early May. Knaggs requested a Glory in early May. Knaggs requested a silent remembrance of her and of those who perished in the attacks on the nation 10 years ago that weekend.

Program Secretary Lt. Colonel Judy Smith led the group in a great, old Army song that begins with a question: “Who is on the Lord’s side?” and concludes with a resounding affirmation: “We are on the Lords side, Savior, we are thine!”

Speaking for the session, Cadet Joy Groenleer from the Hanapepe Corps (Hawaii) spoke with humor and humility. She spoke with simple transparency of someone who for 20 years rationalized her non-answer to a call to officership. She said she first felt the call while on service corps in Germany, but put it aside as service in Hawaii competed with God’s still, small voice.

Marriage to Larry Groenleer, who considered himself a non-Christian, provided additional support for her rationalization. Then, following the miracle births of their three daughters, God’s voice became more distinct as her husband began joining her at church and soon accepted Christ into his own life. She continued to tell God to wait while being active in her corps, but at a recent youth councils, she said the call became even more evident to her. Larry felt the same message from God, and together, they initiated the process and became Proclaimers of the Resurrection.

Proclaiming to the world online

A slight murmur went through the audience as the territorial commander stepped from behind stage right and entered the platform, wearing Levis and a black T-shirt. Knaggs looked like Steve Jobs introducing a new product to a large conference audience.

“This is a remarkable moment in Salvation Army ministry. We continue the Army’s historic commitment to the disenfranchised and forgotten throughout the world with a message of hope, grace and salvation,” he said. “At this time, the Western Territory announces the launch of SAVN.tv. It looks into the future as we march to a new kind of street corner—a street corner to the world through the Internet.

“Each day, 2.1 billion people use the Internet. SAVN.tv will be our mission station,” Knaggs said. “We will send a message of love, and we seek your prayers now and into the future that our diverse programming will reach the hearts and minds of people anywhere.”

He then introduced a few clips and commercials of the network’s programming and urged the audience to tune in.

The Territorial Youth Band, under leadership of Richard Opina, performed throughout the night, including Bruce Broughten’s contemporary piece: “In Spite of the Devil We’re Nicely Saved.”

The assembled cadets sang under the leadership of Territorial Bandmaster Neil Smith. They first presented a song of commitment, “Looking at this World,” by William Hastings and later, “Faith,” by Morgan (arr. Galbraith).

A creative arts ensemble presented Scripture in a short drama titled “Louder than my Shirt,” written by Joy Lee.

God’s plan for you

Following the installation of Colonels Dave and Sharron Hudson as chief secretary and territorial secretary for women’s ministries, respectively, the new chief secretary spoke about “the call.” He used three examples in the life of Peter to underscore the method and meaning behind the call of Christ.

As recorded in Mark 1, the first call came as Jesus approached Peter and his brother along the shores of the sea of Galilee. “Come, follow me,” Jesus said, “and I will make you fishers of men. At once, they left their nets and followed him (Mark 1:17-18 NIV).

“It’s evident,” Hudson said, “that Jesus goes where people work and live and calls them to acceptance of his authority and imitation of his example.” Speaking personally, he continued: “I don’t know what I would have been today had I ignored that call. Jesus calls us to something of greater significance than we might have found with our own choices.”

Peter’s second encounter occurred in the region of Caesarea Philippi just before Christ turned his face toward Jerusalem for his final visit. Matthew 16 tells the story. Jesus asked his disciples, “Who do people say the Son of Man is?” (Matt. 16:13b).

Hudson cautioned, “Society tends to view God as a reflection of itself, thinking that God values the things we do. Paul warned in Romans not to “exchange the truth of God for a lie (Rom. 1:25).”

“If you are anything like me, sometimes a course correction is needed. Jesus is keeping Peter focused on the main thing; keeping Christ in the center,” he said. “The gospel is about the centrality of Christ. Ask the world today who Jesus is and you will get all kinds of answers, but this evening, ­Jesus asks you ‘who do you say that I am?’ God, give us grace to answer as Peter did—to say to him: ‘All that I have and all that I am is yours.’”

The third encounter takes place also at the sea of Galilee, following the crucifixion. When we struggle we go back to a comfortable place, and Peter picked up his nets. Jesus appeared to him and three times asked him the same question: “Peter, do you love me?” (John 21:15).

Each time, with increasing emphasis, Peter assured him: “you know that I love you.” Three times, Jesus answered and told him to feed his sheep. Then, Jesus commanded Peter with his final words: “Follow me” (21:19).

“Can you imagine the guilt Peter must have felt during that moment with Jesus—knowing he had denied him three times?” Hudson asked. “Rather than judgment, Jesus simply asked: ‘Peter, do you love me?’

“We tend to think of God as waiting for us to make a mistake to pounce on us and remind us that we are not good enough,” he said. “Yet, the story of the prodigal son’s father is one of undying love. God, who gave his son, is eager to forgive and restore. We are not to fear him, but to run to him and embrace him.

“God has plans for you,” Hudson said. “He knows you. He constructed you. He formed your heart. He knows your name. He is eager to embrace you—to welcome you with celebration.”

With this invitation, people lined the altar seeking or becoming reacquainted with God’s will for their lives.

Sharing is caring!
Tags:
Proclaimers of the Resurrection, Vol 29 No 15, Welcome Cadets 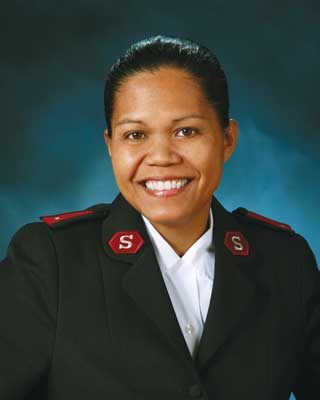 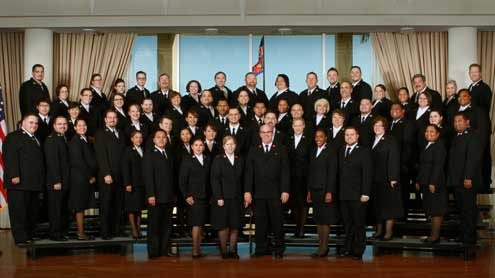 “Proclaimers of the Resurrection” Session Appointments