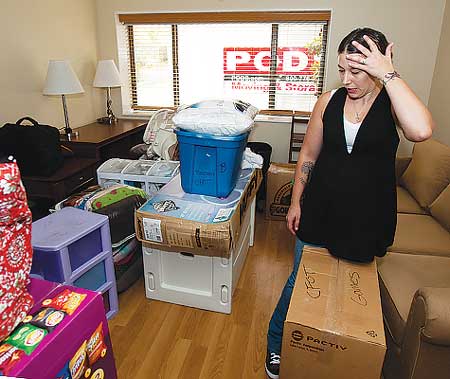 Holly Beeson, a member of the Heralds of Grace Session, organizes her apartment in the cadet dorms at Crestmont.
Photo by John Docter

First-year cadets arrive at the College for Officer Training.

On Aug. 20, 43 members of the Heralds of Grace Session of cadets arrived on the campus of the College for Officer Training (CFOT) at Crestmont, traveling in minivans, rental trucks and cars towing trailers.

“The first day is always exciting,” said Major Ivan Wild, director of personnel at the college, watching as the cadets unloaded boxes and furnishings. “There is such energy and enthusiasm; we can’t wait to get started.”

Cadet Immanuel Beeson shared his enthusiasm right away. “Everything about this place is beautiful, especially the people!”

Cadet Stephanie Galindo agreed. “I’ve been impressed with how positive the atmosphere is that has been created by the staff officers. They have been helpful, and reflect the nature of Christ toward us.”

Upon arrival, the cadets were greeted by CFOT officers and members of the second-year session of cadets, the Disciples of the Cross.

“We are so glad the Heralds are here,” said Cadet Arwyn Rodriguera, president of the Disciples of the Cross Session. “We’ve been praying for them all summer, and now we look forward to getting to know them.”

The College for Officer Training, perched on cliffs overlooking the Pacific Ocean in Rancho Palos Verdes, Calif., holds a special place in the hearts of cadets and officers alike.

“When I arrived at Crestmont, I knew I was on holy ground. I felt as if my spirit was moving like never before,” said newly arrived Cadet Adrian Ribeiro.

“This is sacred space,” said Major Brian Jones, director of curriculum, “where the Army has trained and equipped generations of officers; a place set apart for God’s service.”

First-year Cadet Maryellen Walters said, “I am so blessed to be here and a part of the CFOT family. We were welcomed with open arms by the campus officers, staff and the Disciples of the Cross.”

The Heralds of Grace represent all 10 of the Western Territory’s divisions, and come from a variety of backgrounds. Many have worked for The Salvation Army, with responsibilities such as youth director, residential program manager, human resources coordinator and family caseworker. Others worked outside the Army in the medical field, auto repair and engineering. Five served in the U.S. military. Virtually every cadet held some responsibility at his or her corps—from Adventure Corps leader to Sunday school teacher to Young People’s sergeant-major. Most of the cadets are first-generation Salvationists, but two are fifth, and one cadet’s family has been in the Army for six generations.

“We are thrilled to welcome the Heralds of Grace Session to their new home at Crestmont,” said Major Timothy Foley, training principal. “My prayer is that God will expand their hearts and help them to embrace the opportunities for service and learning that await each of them.”