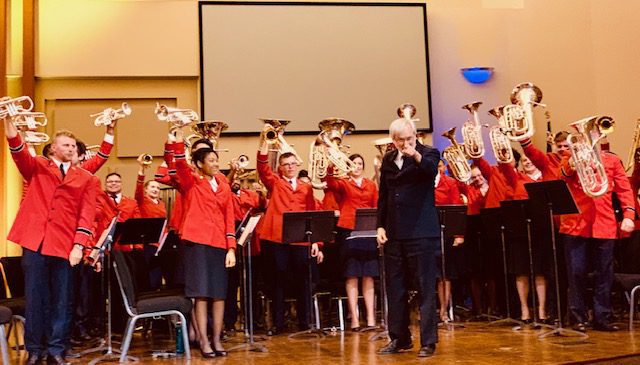 More than 400 young Salvation Army musicians, grouped into eight bands, performed at the Tustin Ranch (California) Corps Jan. 2, just one day after representing The Salvation Army in its 100th appearance in the Tournament of Roses Parade. The performers included 350 youth band members from other Army territories: USA South, Central and Eastern; Canada and Bermuda; United Kingdom and Republic of Ireland; Australia; and New Zealand, Fiji and Tonga; plus international guests from Jamaica, Chile, Brazil and South Africa, and 50 musicians from the USA Western Territory. “These young people had only six rehearsals to prepare for this concert,” Kevin Larsson said. The musicians, who arrived Dec. 27, stayed at Camp Lawrence Daley at Mt. Crags. After their parade appearance, they returned to camp to prepare for the concert.

When massed, this group—the largest ever to march for The Salvation Army in the Tournament of Roses Parade—filled the stage of the corps along with its two side aisles. The concert began with the massed bands performing “Dies Irae” (William Gordon).

Instead of performing in their own bands, the musicians were mixed up, forming eight new bands. This way they experienced performing with other musicians and under a different conductor.

“We did this like a traditional music camp,” Larsson said. “We call it the ‘unofficial’ International Music School, since the General would have to authorize an official one.”

The bandmasters expressed appreciation to the California South Division for providing the young people this learning opportunity, and for their chance to work with youth from other territories.

“One of the joys of us as conductors is to work with these young, enthusiastic musicians,” Waterworth said. During transitions betweens bands, Jacqui Larsson, who handled logistics for the group, provided some statistics. Of the 350 young people, 200 are men and 150 are women. They all arrived on the same day, on 87 different flights, of which 95 percent were delayed, canceled or had mechanical issues. Six sets of luggage were lost, but eventually arrived. In addition to the parade, they performed at a basketball game and at a bandfest for 10,000 people. They let worship in eight different corps, had 15 camp meals, five In-N-Out burgers, and very little sleep.

John Chamness closed the evening with a special thanks to the Larssons and the benediction, and the massed bands performed “Auld Lang Sine.”

The group will march through Disneyland on Jan. 3, beginning, appropriately, at the “It’s a Small World” attraction. Another concert is planned for San Diego.

The youth bands from New Zealand, Fiji and Tonga (led by Duncan Horton) and from Australia (led by Kenneth Waterworth) performed at the Tustin Ranch Corps’ annual New Year’s Eve dinner and concert, along with the Tustin Ranch Band (led by Ed Freeman). In his New Year’s Eve devotional, Kistan spoke of the power of music to calm, inspire and bring people closer to God.

“I believe the ministry of our bands speaks to us of the healing power of our risen Savior…releasing the power of God’s presence, which is with us always,” he said.