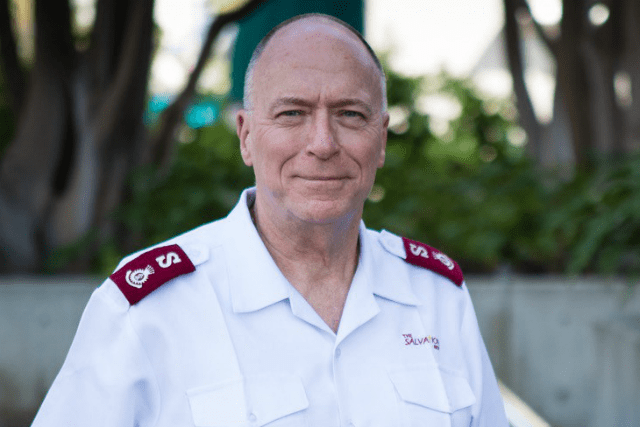 As Major Tom Ford looks back on nearly four decades of service with The Salvation Army, he reflects on all of the ways he’s matured and all of the ways God has used him. But if he has anything to say about it—he’s not done yet.

“I just never want to stop growing,” he said.

Commissioned in 1982 with the God’s Messenger Session, Ford celebrates his retirement this month after 37 years of service as a Salvation Army officer.

His appointments took him everywhere from Africa, to Chico, California, to the College for Officer Training at Crestmont, with his final stop in Mesa, Arizona, as Corps Officer.

“They all had something to offer,” he said. “They were all different, but wherever I went, it was really just about meeting needs and helping people out.”

But it was his first appointment, in Honolulu, that gave him a sense for the importance of ministering to those dealing with addiction and working their way back from incarceration.

“I was working with the treatment facility there, and I think without Jesus, I could tell people were lonely and lost,” he said. “There are so many lost people out there, and they don’t want to be lost. I really believe that, but they just don’t know better.”

From there, his penchant for prison ministry only grew. In 2013, he was appointed as Secretary of Corrections at Territorial Headquarters in light of an increased need for comprehensive services for the incarcerated population. Through mentoring and visitation, Bible correspondence courses, and providing support for inmates’ families, he helped increase The Salvation Army’s capacity to minister to inmates both pre- and post-release. It’s that, he says, that ultimately makes a difference in recidivism rates and gets families on a better trajectory.

In 2018, Ford published his sole book title, “Filthy Rags,” (Frontier Press, 2018) an inspirational devotional book based on Zechariah 3. In the preface, he wrote: “[Filthy Rags] is a witness and proof of the grace and power of God to transform lives. It is a book to encourage everyone, no matter their current situation, to grow closer to God.” While he never expected to be a published author, he also acknowledged that if his book is useful to even one person behind bars, then he’s glad God could use him in such a way.

It’s that passion for reaching the lost and lonely that has inspired many of those with whom Ford has worked over the years. Commissioner Bill Luttrell (Ret.) first met Tom Ford in 1986 after he and his wife were appointed as the divisional leaders of the Hawaiian and Pacific Island Division. At that time, Ford was a Chaplain and Team Worker at The Salvation Army Addiction Treatment Facility in Honolulu.

“Tom demonstrated a unique and loving spirit in working with troubled youth dealing with substance abuse at that facility,” Luttrell said. “He was not ‘doing a job’ but rather worked with and alongside each one individually, treating each as a special person. He helped them realize that God was working a plan in their lives that would lead them to a personal relationship with God himself. He did not ‘work’ to advance, study to impress, or seek money as his goal but based his priorities on the life-changing experiences for those God brought into his life.”

Looking ahead to retirement, Ford said he’s simply focused on being like Christ, rather than simply doing as Christ would do.

“My focus is on learning to ‘be’ and not ‘do,’” he said. “I want to continue being what I should be in Christ, whether that’s ministering with Happy Trails Christian Fellowship or with the jails and prisons here or within my own family. But it has to be about people. It can’t be about programs.”