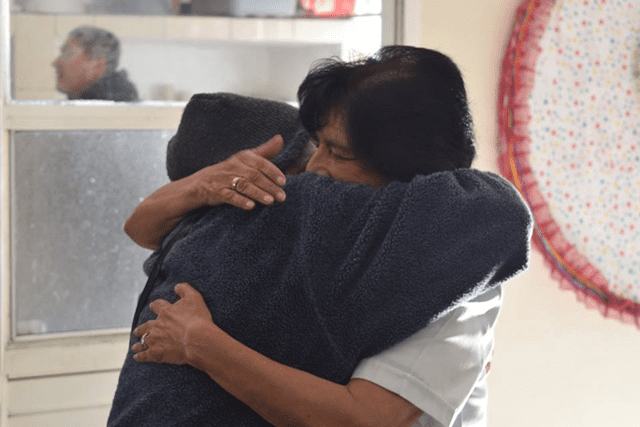 A Baja California shelter opened to serve Mexican nationals at risk of trafficking, but it’s become a safe haven for women and children from around the world.

Gabrielle finally packed up and moved from her rural Mexican village to Tijuana to find work. It was the first step toward eventually coming to the U.S. and building a life with her three children.

But those dreams were dashed when the 26-year-old found herself trapped in a forced labor situation. Working in a taqueria and living in the home of its owner, Gabrielle wasn’t paid what she was promised. She was told she had to work off a debt to the business owner—and that she wasn’t allowed to return to her home village. To make matters worse, Gabrielle’s primary language was a local dialect, and her spoken and written Spanish was limited. So without fluency of the city’s dominant language, where could she turn for help?

Luckily, she crossed paths with Captain Karina Olvera, a Salvation Army officer and program director for Casa Puerta de Esperanza, or “door of hope,” a shelter designed to help deportees and women from rural villages repatriate to their community of origin or build new lives in Tijuana. The facility can house six women and 18 children for up to three months at a time—offering a safe place to stay until they’re in a position to return to their families in other parts of Mexico, if they so choose. Olvera helped her file a complaint with labor authorities, find medical help for an injury incurred while working and arrange to see a psychologist for therapy. She eventually returned to her family in her home village.

Gabrielle’s story is not unique—many marginalized women find themselves trapped and victimized in Tijuana. And existing social services in the area cover less than 20 percent of the women and children in need of aid.

In addition to women like Gabrielle, who never make it across the border, hundreds of women and children are deported daily and released at the Tijuana Deportation Processing Center near the Tijuana riverbed. Because many have lived in the U.S. for years and have no family in the area or connection to the city, they become targets for kidnapping and human trafficking. Among the most susceptible are young women aged 15–35, who often have children of their own who can also become victims. Olvera describes Casa Puerta as a way for all of them to find a level of safety and security many take for granted.

“There is no better comfort for the migrant than the warmth of a coat, the protection of a home with a clean bed and the sweet aroma of a glass of hot milk mixed with chocolate or coffee,” Olvera said. “It is easy to get all these benefits if you have somewhere to go, but this is not the case for migrants, who are exposed to kidnappings, trafficking, extortions, hunger—even to death itself.”

Major Jessyca Carr is Social Services Director for The Salvation Army in San Diego, which periodically provides support for Casa Puerta. She said she was committed to the cause from the beginning, but seeing positive change in the lives of real people has been an enlightening experience.

“When we first talked about opening the shelter to prevent women and girls being drawn into human trafficking, I was committed for justice reasons,” Carr said. “But over the last two years I have come to know Captain Karina and her staff as well as the other officers in Baja California. I see Jesus in them. I really do. They offer compassion, grace and mercy without demanding something back.” The Salvation Army teamed with San Diego entrepreneur Alex Zikakis in 2015 to open Casa Puerta. Zikakis realized the need for the program after visiting The Salvation Army Tijuana’s shelter for men recently deported from the U.S. But what program officials have found since then: the need is much broader than just Mexican nationals. In fact, people from all over the world have arrived in Tijuana over the past few years, hoping to apply for asylum in the U.S.

Haitians, in particular, have become increasingly eager to reach the U.S., after the 2010 earthquake destroyed many of Haiti’s jobs and homes. Then late in 2016, Hurricane Matthew delivered yet another blow to the Caribbean nation. The U.S. had been letting Haitians in under a humanitarian parole provision, but in response to an overwhelming influx of migrants, the Department of Homeland Security revoked that privilege—citing “sufficiently improved” conditions in Haiti. So, many Haitians traveled from South and Central America to Mexico to reach the U.S. border only to find that they couldn’t pass through.

Instead, many have been welcomed with open arms into Mexican society. Some have even become Mexican citizens. And Casa Puerta is uniquely positioned to offer them a safe space and a helping hand until they move on to a more stable arrangement.

“This project is successfully helping a city that is strategically placed on the border of San Diego deal with people who are in a state of transition,” said Jason Pope, technical advisor for anti-human trafficking at The Salvation Army World Service Office. “Whether they have been deported and are rebuilding their lives in Mexico or whether they are waiting for an opportunity to apply for asylum in the U.S., people are treated with dignity and provided care by The Salvation Army who is sharing God’s love.” Beyond Haiti, newcomers from 16 other countries, including Ukraine, Russia, Venezuela, Nigeria and the Congo, have spent time at Casa Puerta over the past couple years. Michele Prosser, director of major gifts at The Salvation Army San Diego, said it’s been amazing seeing the solidarity that mothers and children from around the world find at the shelter.

“The desire for mothers to provide safety and security for their children is universal and so apparent when I’ve met and talked with families who have stayed at our shelter,” Prosser said. “Despite their different cultures and customs, it is heartwarming to feel the common bond of the moms and their gratitude and relief to be safe and sheltered with their children. Their stories vary, but they’ve fled their homes with little more than the clothes on their backs and perhaps a suitcase or two because they felt endangered.”

With reporting by John Funk