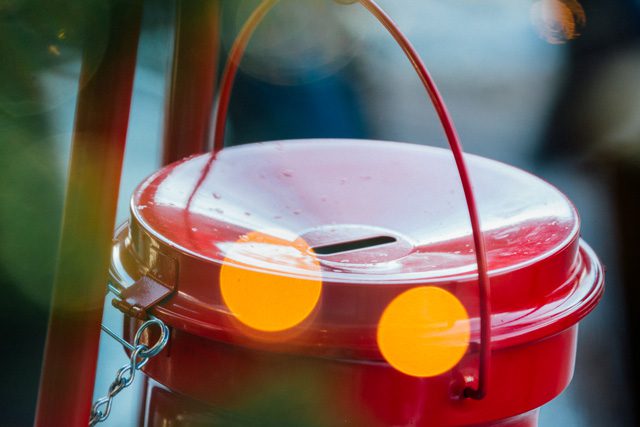 The future of Red Kettles is volunteers

West challenged to increase volunteer hours by another 25 percent this year.

With Labor Day behind us, the 128th year of the Red Kettle is around the corner.

Last year, Territorial Commander Commissioner Kenneth G. Hodder set a goal of increasing volunteer hours at the kettle by 25 percent. This year, he wants to build on that goal so that by 2019, half of all kettle hours in the West are manned by volunteers.

“There is no question that the long-term future of our kettle program will depend on the availability and willingness of volunteers to help The Salvation Army meet the needs of others,” Hodder said. “If ever there is a time when we need our supporters—when we need you—it is this holiday season.”

He said the push for kettle volunteers dovetails with the desire to continue developing the Army’s engagement with the community, part of his territorial vision, “Christ and Him Crucified.”

Kettles have been a Salvation Army tradition since 1891, when Captain Joseph McFee first used the kettle to raise funds for a Christmas dinner for those in need by standing at the San Francisco ferry landing. Fast forward to 2017, The Salvation Army Red Kettle Campaign raised $144.5 million to provide food, shelter and social services to nearly 25 million Americans in need.

For years, volunteer bell ringer positions have been supplemented with paid bell ringers. While this practice ensures someone is consistently manning the kettle, data shows volunteers typically bring in more donations, a fact that is often attributed to their connections and commitment to the Army’s core values.

In addition to financial stewardship, increasing volunteer manpower helps from a community relations aspect, too.

In 2017, volunteers in the Western Territory rang bells for 158,899 hours—21 percent of total hours spent ringing the bell. This year, Hodder hopes an improved online sign up process will increase volunteer engagement.

In Salinas, California, all kettles are manned by volunteers—something that has happened for years. Program Manager Karen Ostby says it mostly began with an advisory board member who would call people, asking, “What time are you going to volunteer?”

While Ostby says she’s not that bold, she stays in touch with volunteers via email throughout the year and hopes to leverage the corps’ easy text system used for other programs for Christmas activities, like the kettle.

“I try to stay on their radar,” Ostby said. “I try to make sure they’re thinking of us.”

Another way Ostby recruits kettle volunteers is by taking advantage of the community service requirement in Salinas—to graduate, students must volunteer 60 hours throughout high school. She often challenges these volunteers to bring two friends. She knows engaged volunteers leave a greater impact.

“People call and say, ‘you have a great volunteer at Walmart who’s really engaging with people,’” she said. “When you hear that, you know they went the extra mile.”

Make a point to volunteer to ring a bell at the kettle this Christmas. Sign up at volunteer.usawest.org.