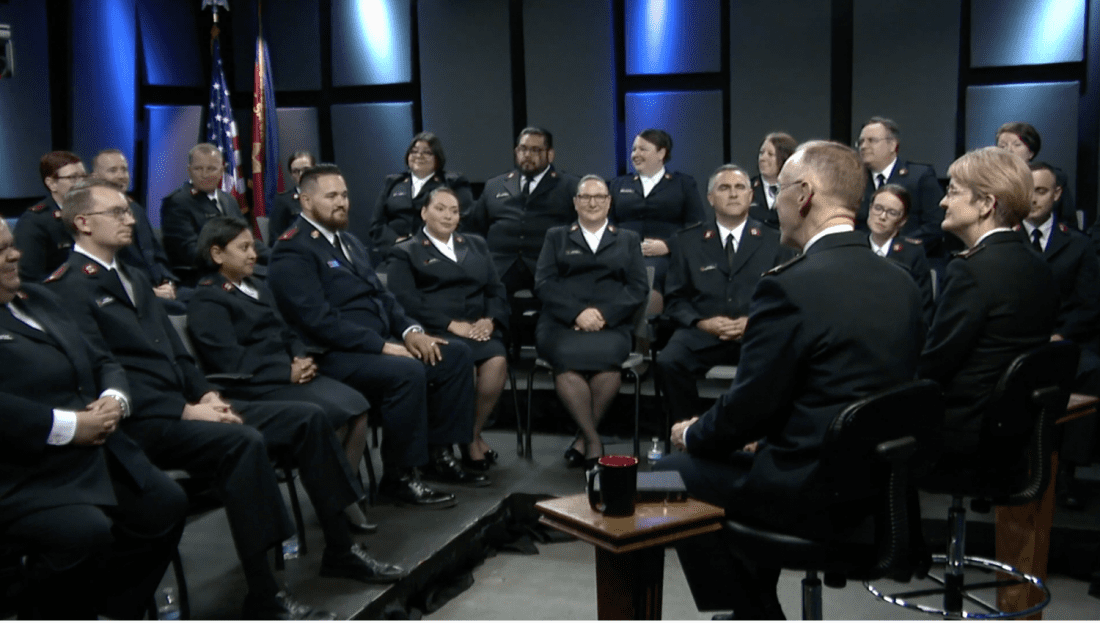 Lieutenants from the Heralds of Grace Session participated in a Town Hall meeting Jan. 30 with Salvation Army Western territorial leaders Commissioners Kenneth G. and Jolene K. Hodder. The meeting was part of the group’s Territorial Officers’ Institute (TOI), held at the Crestmont campus in Rancho Palos Verdes, California, Jan. 28–31—reuniting session members as they prepare for their transition to captains, which comes after five years of service as lieutenants. TOI is one of the ways The Salvation supports and trains officers throughout their careers.

Kenneth G. Hodder opened the meeting, thanking everyone for their efforts to meet people’s needs during the holiday season, and then summarizing Territorial Headquarters’ five areas of emphasis for the coming year. The Program section will focus on The Way Out, the West’s five-year initiative to double its impact on homelessness.

“We want to give an extra emphasis this year on the role that every individual Salvationist can play in meeting the terrible scourge that is afflicting so many of our cities,” Hodder said. “This is not just about big, elaborate projects. It’s about individual Christians who feel that they can do something in Christ’s name for those who are hurting.”

Women’s Ministries is dedicated to outreach to women—not waiting for them to come to The Salvation Army but instead going wherever they are, be it prisons, halfway houses or the streets. The Business section is focusing on smoothing out territorial processes, improving efficiency. The Personnel department will continue to focus on officer development and the Communications section will work to strengthen the West’s advisory organizations.

The Territorial Commander then began the conversation with the fifth-year lieutenants about their experiences to date, presenting seven questions to about three lieutenants per question, and allowing others to share on that topic. Questions focused on their most rewarding experience as an officer, the greatest challenges they’ve faced and stories of lives transformed and their part in this. Hodder also asked what they would have liked to have known before starting officership, what they wished they had done differently during their first five years, how they ensure their own spiritual development, and what advice they have for the next set of new officers.

Many spoke of lives they had seen change through the saving power of Jesus, and of the challenge of balancing family with ministry and of finding time each day for their own spiritual growth.

“Every great battle has many challenges,” said Lt. Yohani Ortiz, who serves in Tucson, Arizona. She mentioned finances, kettles and the solitude of their first appointment in Kake, Alaska. “Our biggest challenge has been finding that balance between family and ministry…But through those challenges God used them in a beautiful way, where we can now minister to people who’ve gone through the same thing.

“It’s a challenge but also a lesson in itself, and a growth in my faith and my trust that everything’s going to be OK as long as I remain faithful,” Ortiz said.

The Hodders responded to each cadet, validating their experiences, sharing some of their own struggles and victories, and offering encouragement.  Session members supported each other, feeling the connection that comes from shared experience.

The lieutenants had also submitted questions of their own, and Kenneth G. Hodder answered these, letting them know not only what Territorial Headquarters is doing but what they can do in the field to accomplish their goals. Topics included restructuring and efficiency, racial equality and homelessness. He then quoted from Romans 8:35–39, emphasizing that we are more than conquerors through him who loved us. Jolene K. Hodder closed the Town Hall meeting in prayer.