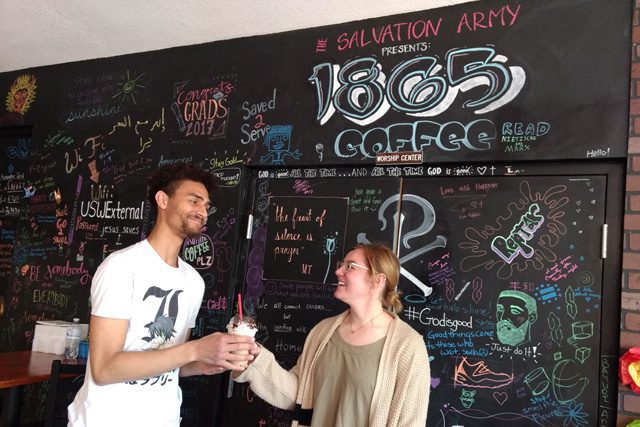 With an open mind for outreach, offerings at 1865 Coffee grow.

Since 2014, the main focus of 1865 Coffee operated by the Tempe (Arizona) Corps Community Center has been to build a rapport with the thousands of Arizona State University students by providing a safe place for them to recharge themselves—and their laptops—and even grab a sandwich.

“Our goal has always been to have a place for people to belong,” said coffee shop manager Shelby Baker.

Proceeds from the coffee shop, which is open Monday through Friday from 8 a.m. to 5 p.m., benefit local Adult Rehabilitation Center (ARC) program. The establishment even sells promotional t-shirts and logoed coffee cups with its moniker, “Doing the Roast Good,” a play on the Army’s mission.

Building on its success, the Tempe Corps—led by Corps Officers Lts. Genesis and Martha Apuan—set out to attract busy students to Bible study by serving up an evening of fellowship, good coffee and a hot meal.

“I had recently heard a sermon and part of it stuck in the back of my mind,” Baker said, “about feeding the soul.”

It was decided Psalm 34 would be the guide.

“Taste and see that the Lord is good; blessed is the one who takes refuge in him [Ps. 34:8], seemed a perfect fit,” Baker said.

So “Psalm 34 Ministries” started at the coffee shop and Tempe Corps in spring 2017. But while the space was provided, Baker hadn’t done much planning on how to financially sustain the program.

“Those of us who were involved were providing the food,” Baker said.

It was a “little discouraging” when only one person attended the first Sunday, although Baker recalls “there was a wonderful night of prayer.”

Volunteers kept at it, handing out flyers on the street and on bulletin boards. And it didn’t take long for the organizers to realize the outreach connected more with the local homeless than with busy students.

“They needed the spiritual and physical nourishment, too,” said Baker, who noted that there aren’t other free food programs for those experiencing homelessness in the area on Sundays nights.

Other social agencies and the corps’ social services representatives promoted it. But once the turnout grew, so did the cost of the meals.

“We really lucked out because there were local restaurants that saw what we were doing and helped us out,” Baker said.

Now, the coffee shop opens for roughly 30 attendees of Psalm 34 Ministries on three Sundays a month. Attendees also take the leftovers with them.

Baker believes the program can be easily replicated elsewhere.

“The coffee shop atmosphere adds a sense of being someplace that’s alive and thriving as people come in and out, but really I think Psalm 34 Ministries can be offered anywhere you can worship and eat,” she said.

Having strong support of the local corps leadership is critical, as is having the community’s support. But once the program is launched, Baker said it’s important to ensure those involved keep an open mind about who will be ministered to.

“You might think it’ll be a certain group,” she noted, “then you find there’s another purpose. And that’s what matters most.”