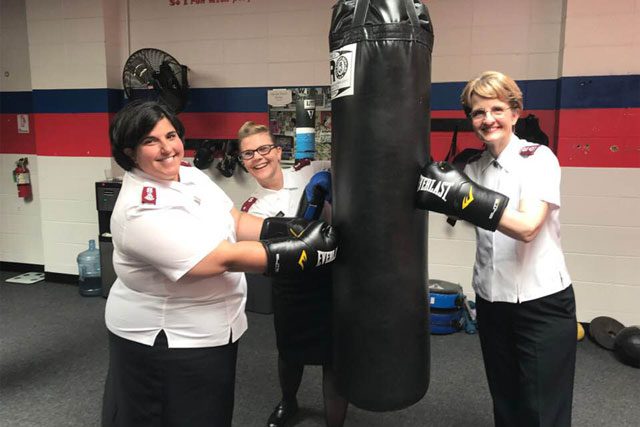 The Territorial Commander tweeted about the visits along the way:

“Lightning Visits – Summer 2019 – Round One – An exciting tour of the Oxnard Corps with Lts. Humphrey and their volunteer, Maria. This place is alive!” “Quickly followed by a visit to Ventura, where Captains Joshua and Loreen Hamilton have just arrived. But their vision for the future is amazing. God bless Ventura!” “My wife and I then stopped by the Santa Barbara Corps to see Majors Carr and Lt. Ohl. This will be a very fruitful ministry!” “Our last stop in Round One was Santa Maria, where Juan and Patricia Torres run almost everything with volunteers. And you should see his VBS backdrops and props. Gifted!” “Round Two – A great visit today with Majors Mark and Michelle Thielenhaus in Lodi. We were there to welcome Captain Robin Swales, and there is no doubt that this will be a powerful team. Go Lodi!” “Lts. Juan and Mony Oregel (with Cory) are back home in Stockton. They’re already working closely with the Stockton ARC, and lives are being changed!” “The last visit this morning was with the new team in Modesto (Majs. Laubach and Capt. and Lt. Snyder). With their skills and this amazing facility, there’s no stopping them. Praise the Lord!” “First visit this afternoon was to Turlock, where we spent some time with Major Debi Shrum. Major Shrum was a recipient of the Divine Servant Award this year, and after seeing all she’s done over 17 years in Turlock, I am even more convinced that we made the right choice!” “Stopped by Fresno to greet Majors Danny and Carole Abella. What faithful and hard-working officers they are!” “Finished today with the Onitsuka-Adams family. Clovis is blessed to have these fabulous people. More to come tomorrow!” “Lts. Yonathan and Cynthia Escobar have brought together two congregations in Tulare, and the Army is booming. Kids’ programs strong, greater presence in the community, and more service to others. Hallelujah!” “Round Two of this summer’s Lightning Visits concluded today with a great time at the Bakersfield Corps. Captains Kevin and Heather Pope ably led their people in worship. The music was magnificent, and the message was solidly biblical, drawing many to the altar.”