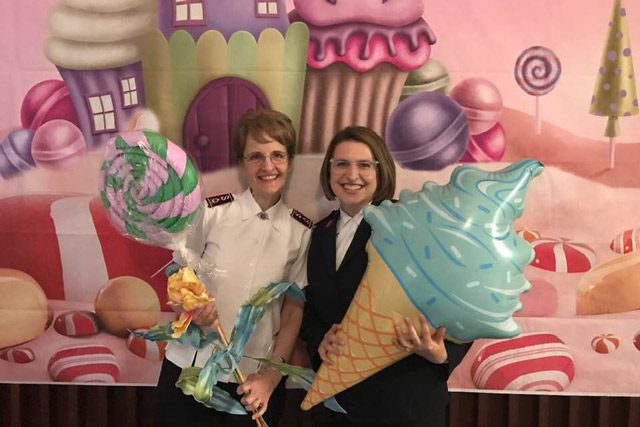 The Territorial Commander tweeted about the visits along the way:

“Lightning Visits – Round Three – Amazing Visit with Lts. Stephanie and Steven Pavlakis (with Cherise!) in Roseville. I’d never been to Roseville, but I certainly want to come back. Have a great VBS!” “Majors Julius and Shannon Murphy are not only growing their congregation, but reaching out in new ways to the homeless as well. God bless the Yuba-Sutter Corps!” “In Redding, Captains Diana and Tim Danielson set the pace in Emergency Services, addressing homelessness and the Christmas kettle. Wow!” “Lts. Heather and Joseph McBride have been in Grants Pass for only seven months, but their vision for the future is already moving forward. Keep going!” “Medford, Oregon is fortunate to have Majors Jason and Angelina Koenig and Lts. Ernest and Sara Evans. VBS is underway, and the kids love it. Go, Major JDad!” “Thank you to Envoys Dennis and Tawnya Stumpf (and Mafa!) for a memorable visit to Coos Bay. This corps is one busy place!” “Lts. Charles and Dawn DeJesus are doing a fabulous job in Albany. They see no limits to what the Army and the Lord can achieve in their community. Praise the Lord!” “Newport has never been so active as it is now under the leadership of Lts. Corrin and Nathan Perry. And little Ezra is a delight!” “The Salvation Army’s ministry in Bend is growing like . . . corn!  Thanks to Capts. Mike and Rachel Johnson and their dedicated soldiers, employees and volunteers. And keep going, Skyler!” “The Dalles is open for business! Congratulations to Captain Ray Morris for all he’s achieving in the name of Christ.” “I’m not really a selfie kind of guy, but we’ve known Majors DeWayne and Toni Halstad for years. They’re off to a wonderful start in Pendleton!” “We had the privilege of a lightning visit to Caldwell, hosted by Lt. Colonel Eda Hokom. May God bless Majors Robin and Stephanie Bridgeo as they lead this growing and engaged congregation.” “Second stop on this last day was in Nampa, which has just welcomed Capts. Ricky and Sylvia Scruggs. A busy Sunday morning in this bustling community. God bless the Nampa Corps!” “The final stop on this series of Lightning Visits was in the beautiful city of Boise, where the Army will soon to move to magnificent new facilities.  Praying that God will bless Majors Mike and Nancy Halverson and Lt. Mike Garlough as they lead the congregation into the future!”