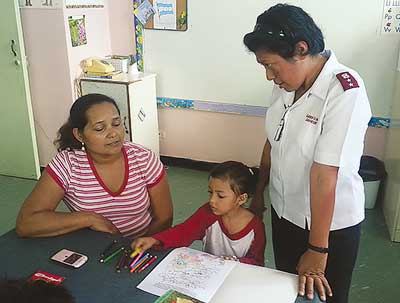 The Salvation Army in Honduras offers education to hospitalized children.

The Salvation Army in Honduras teamed with the San Pedro Sula and Tegucigalpa hospitals and Honduran Department of Education in 2001 to create a school program within the hospitals to keep children from falling behind in school while sick.

In the past two years, the program reached 7,730 children, exceeding the annual goal to help 1,400 children.

The Honduran Department of Education provides the teachers, the hospitals provide space for the classes, and The Salvation Army runs the school program, providing the materials, resources and volunteers needed to keep it going year-round.

The typical school day for a child in the program consists of activities based on the Department of Education civic calendar, singing, and sharing and exploring values. The average classroom contains four to 11 students, depending on the physical condition of the children.

Teachers prepare the class material, visit and meet with newly hospitalized children, and determine which of them will be able to go to the classrooms. Salvation Army volunteers work with the teachers to meet individually with the children who need to remain in bed.

All school work and progress is recorded and sent to the principals of local schools and the Department of Education, along with a document from the doctor explaining why the child was hospitalized in order to make sure that he or she receives credit for the education completed. “This motivates the children a lot, and the parents get involved by encouraging the children to do their homework,” Soler said. “There is evidence of some of the children returning to their schools with increased motivation after being in the program during their hospitalization.”

According to Soler, around 5 percent of the children were unable to attend school prior to hospitalization because they lived in rural areas with big families who were in no condition financially to send them to school or because of their health conditions. She said approximately 90 percent of the children in the program continue their education at public schools after being released from the hospital.

“When a child is sick, health is the priority, which is why we cannot hold them to educational expectations that create unnecessary stress,” Soler said. “The main idea is to motivate the child to continue his or her studies.”

Progress is tracked by setting educational goals, but varies based on the time of an individual’s hospitalization and health.

“There is an immediate impact on the kids because it motivates them, and makes them more active,” Soler said. “If the school didn’t exist many of them would be very depressed.” Dr. Jorge Villacorta, head of pediatrics for the San Pedro Sula Hospital, said that the studies affect the health of the children.

“The positive change in the emotional states of the children is evident because they need something to wake up to every day, and they get that with the school,” Villacorta said.

Byron, a child in the program, spent a little over a month in the hospital before going home and continuing his education at a public school. Despite some difficulty in mathematics, he adapted well and is excited to be back in his school.

“After everything my son and I went through, this was a great help,” said Aracely García, Byron’s mother. “The boy’s mind was focused on his studies even while stuck in a bed and connected to machines to help him get better.”

Many of the parents with children in the program do not know how to read or write, so the program also offers literacy, writing and math courses to them. The Salvation Army often provides these parents with food, and at times financial assistance for emergency medications or procedures.

Adults and children staying at a local shelter to be closer to the hospital for medical treatments can also participate.