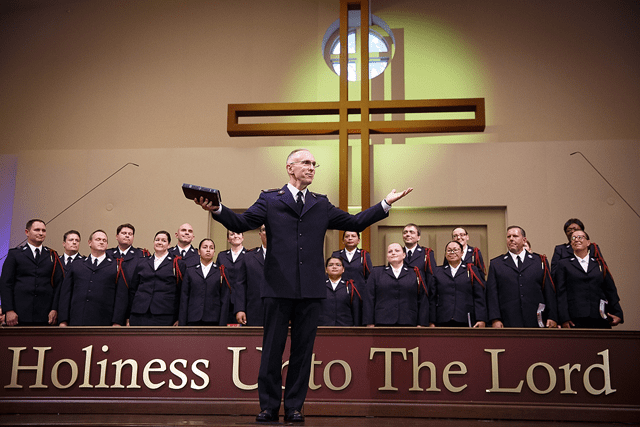 A new group of “messengers” recently arrived at The Salvation Army College for Officer Training at Crestmont (CFOT) in Rancho Palos Verdes, California. With compassion in mind, Riley called for a time of prayer for those impacted by Hurricanes Harvey and Irma, while a video showed Salvation Army emergency disaster services personnel on the frontlines of Hurricane Harvey relief efforts.

As the Western Territory Staff Songsters (Songster Leader Barbara Allen) performed “Except I Am Moved With Compassion” (Orsborn/Peterson), the new cadets enacted how lives can be transformed when people—no matter what their faults—are treated with compassion.

Cadet David Vargas prayed, asking God to equip his session for service with God’s own “unfathomable love, mercy and grace.”

The first congregational song, “Stand Up, Stand Up for Jesus,” brought everyone into the meeting’s theme: all of us, not just officers or pastors, are called to “stand up for Jesus.”

The Staff Songsters sang “In Christ Alone” (Craig/Koch), and Territorial Candidates’ Secretary Captain Joanne Louangamath presented the new cadets, who represent 15 corps from seven of the the territory’s 10 divisions. They bring with them 12 children, and their average age is 40.

“These 20 individuals have committed their lives to Christ, to showing kindness, compassion and forgiveness in a world that is often unkind, uncompassionate and unforgiving,” she said. In a video testimony, first-year Cadet Brian Qualls spoke about the effects of bullying on his life; at one point, he didn’t feel life was worth living. He experienced God’s love through The Salvation Army’s camp ministry, and has since endeavored to pay that experience forward.

“Camp means a lot to me,” Qualls said. “God brought me here, where I would get the most from my life.” “I chose to stand,” declared Cadet Omoduni George-Kawaley in her testimony. George-Kawaley endured some difficult years before her path led her to CFOT from the West African nation of Sierra Leone. She found strength through a Bible verse she discovered as a child, Jeremiah 1:5: Before I formed you in the womb I knew you, before you were born I set you apart; I appointed you as a prophet to the nations. Today she seeks to bring hope to others: “If you feel that God is not answering your prayers…I want to assure you that God loves you unconditionally,” she said. “So, I encourage you: choose to stand on his Word.”

After the Tustin Ranch Band (Bandmaster Ed Freeman) performed “The Blessing” (Himes), Jolene K. Hodder read Romans 8:31-39, reminding listeners that nothing will be able to separate us from the love of God that is in Christ Jesus our Lord (v. 38).

After the Staff Songsters performed the gospel-infused “Stand” (McClurkin/arr. Allen), Kenneth G. Hodder gave the message, considering what it means to stand firm on one’s convictions. He referred to Romans 8, when Paul says that we are more than conquerors. “We are members of that family that will take that victory—guaranteed by God—to the rest of the world,” Hodder said.

He went on to recite The Salvation Army mission statement.

“[This mission] springs from the conviction in each Salvationist’s heart,” he said. “The compassion of this session is not mushy sentimentality. This is a compassion based upon conviction…passion, with God behind it. There must be something about us that’s different, that remains unchanged no matter what we encounter… On the basis of those convictions, let us bring compassion to all; let us love as we are called to do.” As Hodder made various statements, such as “When no one else would, I chose to stand,” the new cadets rose, one by one, until all were standing.

“But it’s not just for them,” Hodder said, inviting the congregation to come forward and join the Messengers of Compassion in prayer. During this time of commitment, dozens of people came forward, re-affirming their conviction that nothing will separate us from the love of God.