Letricia Lega, Felix Haro, and Cachet Benham hold up their “Bell Ringer of the Year” plaques. Photo by John Docter

With the holiday season in full gear, so too are The Salvation Army’s iconic Red Kettles and the bell ringers who bring them to life.

The Southern California Division’s Kettle Kickoff gave recognition to three of the area’s most outstanding bell ringers for the 2011 season on Nov. 26 at the oldest Farmer’s Market in Los Angeles. The event celebrated the start of the holiday season as well as the Army’s partnership with fellow nonprofit Toys for Tots with Christmas carols from the Compton Corps, a tree-lighting ceremony, and an appearance from Santa Claus. The event’s main attraction, though, was awarding the division’s “Bell Ringer of the Year.”

Honored for their spirit, enthusiasm and service were not one, but three volunteers: 10-year-old Letricia Lega, 12-year-old Cachet Benham and 14-year-old Felix Haro, who have all served as volunteer bell ringers for multiple years. All three recipients, who were visibly emotional upon acceptance of the award, received $150 gift cards to any of the Farmer’s Market vendors.

Bill Alder, a former Salvation Army Sunday school teacher, traveled from Arkansas to attend the kickoff. Alder believes it’s important to give outstanding bell ringers recognition because it’s what the Booths would have wanted.

“It was Eva Booth who said to pray that we are always doing the most good for the most people for the most amount of time,” Alder said. “When we honor these bell ringers that’s exactly what we’re doing.”

“Bell ringers are a symbol of Christmas for most Americans,” Lovin said. “We want them to be gracious and warm.”

While red kettles are globally recognized and naturally attract many donors, data collected by Tim Schaal, territorial director of software development, suggests the kettle workers themselves are a key factor in securing donations.

The Army––which raises 40 to 50 percent of all its public donations during the holiday season––prefers to utilize volunteer bell ringers over paid employees. Schaal’s data showed that, on average, volunteer kettle workers secure almost $9 per hour more than paid employees. Lega, who was the top-grossing kettle worker in the entire Southern California division, is a volunteer like most other “bell ringer[s] of the year.”

Though many Army divisions experienced a heavy shortage in bell ringers this season, thousands still stepped up. Lovin said that despite advancements in digital innovation and more convenient ways to donate such as the Online Red Kettle, the standard face-to-face model is still effective.

“The old-school kettle still works but only if we do it right,” Lovin said. “We want people to know that we’ve been blessed with what we have and that we are called to share it.” 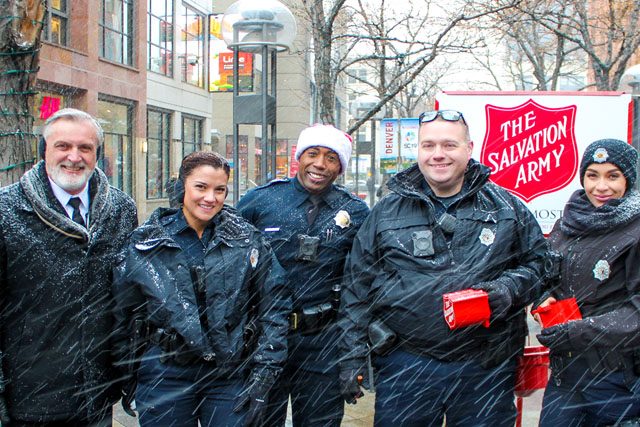 Denver Police, Fire departments compete in ‘Battle of the Bells’

on the corner “The battle between belief and nonbelief”

the spice box “Not too old to serve”

from the desk of…Memories, magic and the message