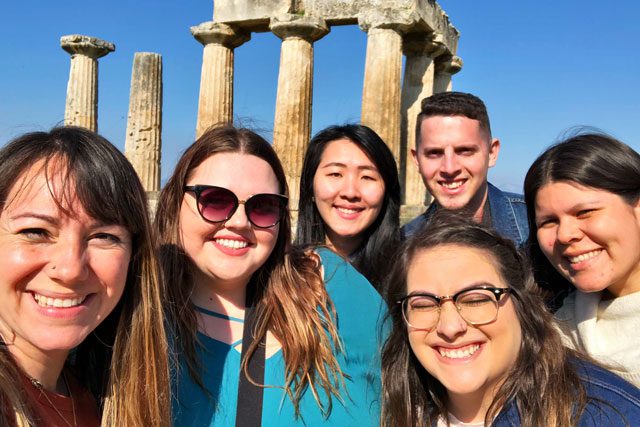 The Salvation Army Western Territory sent its first Justice Immersion Service Corps team to Anthens, Greece, in 2019, to serve and support the Army’s social justice ministry there. Beyond the immediate purpose of assisting the ministry in Athens, the long-term goal was to equip and mobilize the team in their own social justice efforts at home.

Priscilla Santos, then Territorial Social Justice Initiatives Coordinator, led the group; Santos currently serves as International Modern Slavery and Human Trafficking Response Coordinator at The Salvation Army International Social Justice Commission. The Territorial Youth Department and SA Justice collaborated to offer the mission trip. Santos said the organizers “focused the trip on how the team can integrate concepts into their lives, from learning how to listen and understand excluded voices, to learning new ways of mutuality and how to live differently by implementing changes in your life.”

Major Keilah Toy, then Territorial Social Justice Secretary, said the team members were selected last year based on their passion and their current and future ministry in social justice issues. “One of the requirements for their selection was to follow-up with a social justice project in their corps and/or community when they returned home,” she said.

Earlier this year, prior to the pandemic, Toy asked the team members to write an essay on their project.

While the coronavirus has impacted some of their current plans, all the team members were able to take action in their communities to increase awareness of social justice issues.

Before the mission trip, Jordan Sargent had participated in Sweet Prayers, an outreach to women working in massage parlors. When she returned from Greece, she knew she had to open her heart more fully to these women.

“I realized I hadn’t’ tried as hard as I should to make real connections with the women,” she said. Since the trip, she has become closer to one woman in particular, who now feels safe sharing details of her life.

Sargent also gave a presentation about the Greece trip to the Yakima Corps women’s ministry group, and in September 2019, for the National Day of Prayer for Human Trafficking, she preached the sermon.

“I used this Sunday to bring a powerful message about human trafficking,” she said. “I had numerous corps members come up to me after and tell me they had no idea this was happening. I felt blessed that God was able to use me not only on this day, but every day since coming home to do more of his work…I have a fire to keep fighting the good fight and I will not back down.”

Monique Garcia became involved in the Sweet Prayers ministry through the Santa Monica (California) Corps while participating in a discipleship program there. This inspired her to apply for the mission trip.

“The biggest takeaway from the trip was learning the difference between sympathy and empathy—feeling for them, but not feeling bad for them [or] looking down at them,” Garcia said.

She came back from the trip motivated to educate others about this issue. “Once we are educated, I believe people will be prompted to change, how could they not?” she said.

For her follow-up project, she held a free documentary screening at the Santa Monica Corps of “I am Jane Doe.” After the movie, she provided more information about human trafficking, how to get involved and what The Salvation Army is doing to help victims.

“The project turned out better than I could imagine,” Garcia said. “I didn’t know who would show up, and I ended up getting around 40 people, praise God!”

Eunice Chen was pursuing her Master of Social Work degree when she learned of the mission trip. She was excited.

“I know God calls me to be a social worker, and I want to gain as much social work experience as possible,” she said.

In Greece, she observed The Salvation Army officers there serving the women and refugees joyfully, even though they had limited resources. “Their work was not easy at all, and they shared it because Jesus loved them,” Chen said. “[This] encouraged me to be a better social worker and continue serving God’s people in his name.”

Back in the U.S., Chen has sought to increase awareness of social justice in Chinese culture. She posted articles on the San Gabriel Corps Facebook page and invited corps members to follow the page. She also shared her Greece experience with her corps, as well as at the Oakland (California) Chinatown Corps.

“I am hoping more people from Chinese Corps—San Gabriel, Oakland Chinatown, San Francisco Chinatown—will participate in the social justice ministry,” she said. “I will continue to serve as a social justice sergeant in the community, and I am open to more serving opportunities.”

Emily Reed’s interest in human trafficking began in college, when she did a project on trafficking in Oklahoma, her home state. When she heard about the mission trip, she was “all in” and also encouraged her husband, Brian, to apply.

In Greece, she led a devotion with the women who came to the Army’s Green Light Project. She prayed God would give her the words they needed to hear.

“At the end of the devotion I told them they were all beautiful and some of them became emotional,” she said. “I learned that some of those ladies hadn’t been told that in a long time or men would call them that right before they were purchased.”

When she returned home, she was eager to pursue anti-trafficking and refugee work, and attempted to get into the immigration center in Tacoma to do devotions with the people detained there. When she was hindered in this pursuit, she became discouraged.

“I then learned that God wanted me to take another path with social justice,” she said. As a behavior therapist, she works with children with special needs, focusing on those on the autism spectrum. Her work has enabled her to more effectively help with corps youth programming.

“I am now able to help educate our corps members and youth leaders on how to talk to, interact, and help navigate the kids’ feelings..My hope is that I can continue growing in this area and continue educating others to love this community…We are all the body of Christ and we need to love every bit of it.”

She found out “God will use you right where you are…I have learned that it’s OK if your idea of social justice doesn’t line up with God’s, because he will set you straight and use you beyond [what] you ever thought.”

At first, Brian Reed was unsure about joining his wife on the mission trip, even though he wanted to be an advocate for social justice.

“I am a man, so how would I make women feel comfortable around me when many abusers, including traffickers, are men?” he said.

His wife challenged him to share his passion from a male’s perspective on trafficking. Not expecting to be selected, he went ahead and applied.

As the only male on the team, he felt protective toward the rest of the group; however, God soon gave him a new outlook. The plan called for the women team members to go to the streets to greet the women there and invite them to The Salvation Army for a meal and a devotional in a safe place.

“Being protective, I was not comfortable with the idea,› but this really did put things in the right perspective for me,” he said. “I began to pray for the girls and rested in the fact that God will and always will be the one to protect them all. I stayed back at the day center and cooked and cleaned in the kitchen while the team went out. I even stayed in the kitchen the whole time the women were in the building.”

After a few days, women who at first wouldn’t even look at him became more comfortable with his presence, eventually approaching him and speaking with him.

“The lesson I learned was that God didn’t bring me on this trip to be security,” Reed said. “He brought me to serve and be an example as a good man, one who loves his wife and will be good to all. This was something that was foreign to them.”

Returning home, he planned to focus on migrants and refugees at the corps. He began attending monthly meetings of some advocacy organizations and through these connections, he found out about a play staged by a group of immigration attorneys regarding unjust court hearings in the Seattle area. The play served both to increase awareness and raise funds. Reed participated in the play, portraying an immigrant who moved here at age 7 from Cambodia; the judge ordered him to be deported.

“The play was powerful, and God used that and the migrant day center in Greece to fan the flame in my heart when it comes to this justice issue,” he said. “I am currently working with my corps officers to partner with two agencies so we can help distribute clothes to detainees coming out of the detention center.”

He also planned to host the play at the corps, with a division-wide invitation for others to attend.

“Thinking back to applying for the immersion trip and how I felt that God could not use me and seeing how he has used me within the year is humbling and motivating,” Reed said. “It is time for me to continue to live a life of sacrifice and not of comfort, seeking justice and rejecting passivity, for his passion, for his glory. I have learned it all starts with ‘yes.’”