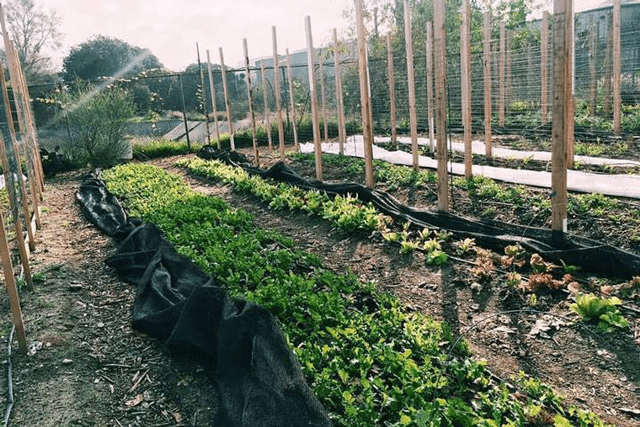 A 1.5-acre urban farm neighboring The Salvation Army Bell (California) Shelter is picking up momentum thanks to both additional funding and its enriched soil starting to show its full potential.
Launched by GrowGood, the farm includes an orchard of 50 fruit trees, 14 raised vegetable garden beds, a chicken coop, and a California native plant garden filled with more than 300 flowering, drought-tolerant plants. GrowGood’s vegetable growing areas and trees are all connected to a state-of-the-art Netafim drip irrigation system. Thanks in large part to the fresh, organic produce provided by GrowGood, Bell Shelter can serve more than 6,000 meals each week, according to Head Chef Amy Carillo. Staff is projecting an output of 18,000 pounds of produce this year—more than twice the amount it produced in 2016—and six times its yield in 2015.
Brad Pregerson, Co-founder and President of GrowGood, said the social enterprise is constructing a new 30- by 58-foot commercial, climate-controlled greenhouse, which will catalyze further growth of its social enterprise and job placement operation with the shelter.
“We just secured the building permit, and we’re about to break ground,” he said. The project is funded by The Roy and Patricia Disney Family Foundation, which awarded GrowGood a $100,000 grant through the annual Goldhirsh Foundation’s LA2050 initiative. GrowGood also recently received a grant from the Mark S. Taper Foundation, and won a $12,000 social enterprise award from UCLA.
The greenhouse will require a foundation, electricity, and plumbing to increase the production scale and enable year-round cultivation. GrowGood will also need to hire additional staff to help on-site and with delivery to outside customers.
The farm already employs five residents from the Bell Shelter on a temporary, three-month basis, and works with contacts in the community to help them find permanent jobs. The goal of the job training program at GrowGood is to work alongside case managers at the shelter to equip residents with both hard and soft skills to help them thrive in a new career.
“It’s a pretty rigorous process,” Pregerson said. “It requires folks to send in their resumes, and we schedule interviews. We treat it as a real job, which it is.”
He said at least three former shelter employees from the farm have secured permanent placements in outside agriculture, food or landscaping jobs.
GrowGood’s biweekly “Food for Life” class is a favorite among residents, who sign up to participate in small groups of 15 at a time. GrowGood’s Jayne Torres provides classroom instruction, hands-on training, mindfulness exercises, and ongoing maintenance of the farm.
“The garden and orchard provide a peaceful slice of nature where clients can walk among native California plants, orchards and rows of vegetables,” said Steve Lytle, Director of Bell Shelter. “Research has shown that walks in nature can actually heal the brain and improve our thinking, so our clients also have access to improved brain health through GrowGood’s efforts. It gives them a chance to get out of the shelter, roll up their sleeves in the garden, and forget about their problems for a few hours a week.”
One such resident, James Washington, knows all too well the value of a peaceful day working in nature. A veteran of the Gulf War, he came to the Bell Shelter after suffering a debilitating stroke. He volunteered on the farm on a regular basis throughout 2015 making major contributions to the farm expansion.
In 2016, Washington moved out of the shelter into permanent housing, and GrowGood hired him as their first part-time staff farmhand. He has also played a significant role in training newcomers on the farm as the formal job training program took shape.
“He’s a wonderful person and has been so valuable to us,” Pregerson said. “It would be 100 degrees outside, and there he’d be with his pick-axe working the soil, smiling. He finds peace in it. It’s healing.”
Sharing is caring!
Tags:
California South, feature, GrowGood, Southern California, Vol 35 No 05