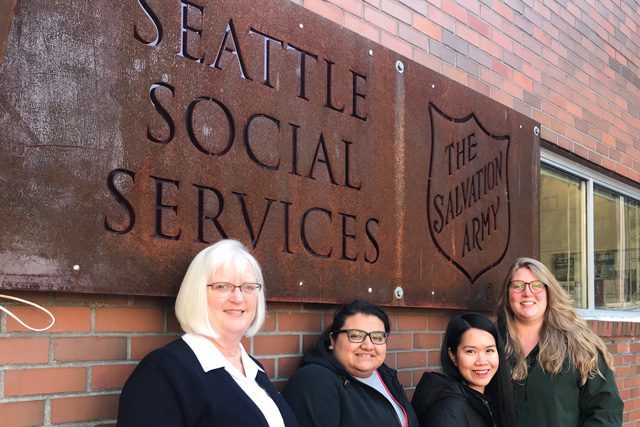 A subset among people struggling with homelessness exists—a group with special needs: the survivors of commercial sexual exploitation (CSE) and labor trafficking. It’s a global problem, and one The Salvation Army is tackling in many locations around the world, including the Western Territory.

Smith approached the co-chair and asked what the biggest need was. It was housing—many survivors ready to leave the life have no place to go.

Through the task force, Smith and her team began building relationships with other lead agencies to help trafficking survivors in Seattle. These collaborations are allowing the Army to set aside beds specifically for CSE and labor trafficking survivors at an undisclosed women’s shelter and the William Booth Center. In addition, new funding was earmarked for two gender-based violence community advocates.

“We are excited to begin working with women who are ready to take that next step and move into permanent housing—some of whom have families and children,” Smith said.

Seattle Social Services’ ministry is in line with The Salvation Army Western Territory’s Fight for Freedom, a 10-year strategic action plan launched in 2013 to combat human trafficking within the territory.

“We are thrilled that Seattle Social Services will fulfill this huge and necessary gap in its community by providing a safe place of belonging for both survivors of labor trafficking and sexual commercial exploitation,” said Priscilla Santos, Territorial Anti-Trafficking Initiatives Coordinator.

The key players fighting human trafficking in the Seattle area meet once a month and refer women to The Salvation Army for housing when they are ready. Along with strengthening the Army’s connections to the anti-trafficking network, the other agencies provide the Army with training on how to work with this population and its specific needs.

“It’s super difficult,” Smith said. “We thought the women wouldn’t be too different from the women we already serve. We were surprised. It was a whole new level of trauma. What they have been through is heartbreaking. It’s challenging—and it’s challenging to combine the populations.”

While the nine beds designated for CSE and labor trafficking survivors may seem small, they make a difference. According to Real Escape from the Sex Trade (REST), the state of Washington has only 19 beds designated for CSE survivors, and before the Army provided the six labor trafficking beds, it had none for that population. Of the 19 CSE beds, only 10 are low barrier—with three of them at the women’s shelter.

Women can stay at the 39-bed shelter for 90 days. In the six months the CSE bed endeavor has been official, six women have stayed there and three moved on to permanent housing. The women are connected to resources, like CSE community advocates from the referring agency and the Army’s housing navigator.

“One of the best ways to be there for someone who has been trafficked, is to walk alongside them—reminding them of the very important truth that they are not alone,” Santos said. “This new gender-based violence community advocate will do just that—helping clients navigate difficult systems, providing needed support and working toward assuring justice for that individual.”

Smith is pleased with the progress The Salvation Army is making. The bottom line, she said, is going to task force and networking meetings and finding out how the Army can come alongside and help.

“Housing has always been the biggest need,” Smith said. “We started small. We’re continuing to build relationships, train staff and learn as we go. We’ve learned a lot and it’s paying off.”