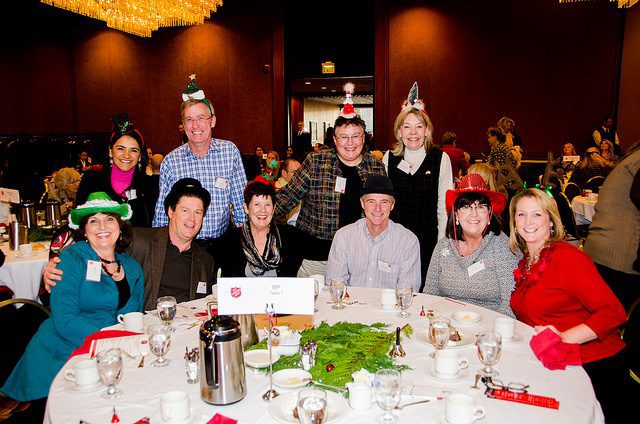 Mariana Morari, with the Alaska Division’s Community Relations and Development department, carries a kettle to the counting room.

The event was the official kickoff for bell-ringing season, which in Alaska begins the Saturday before Thanksgiving this year and runs through Christmas Eve. Season of Giving donations last year helped provide more than 275,000 meals and nearly 30,000 toys and gifts for children, as well as addiction treatment for hundreds of Alaskans.

This year’s honorary co-hosts were Bob and Anne Bulmer, of Alaska Executive Search. Bob Bulmer said his respect and support for the Salvation Army goes back 50 years. When the 1964 Good Friday Earthquake devastated the village of Ouzinkie, sweeping away his father’s cannery and leaving residents without food, water, heat or clothing, others wouldn’t help without a hefty cost, he said. But, “with just one phone call from my father, The Salvation Army responded with ‘How may we help?'”

More photos may be viewed here.