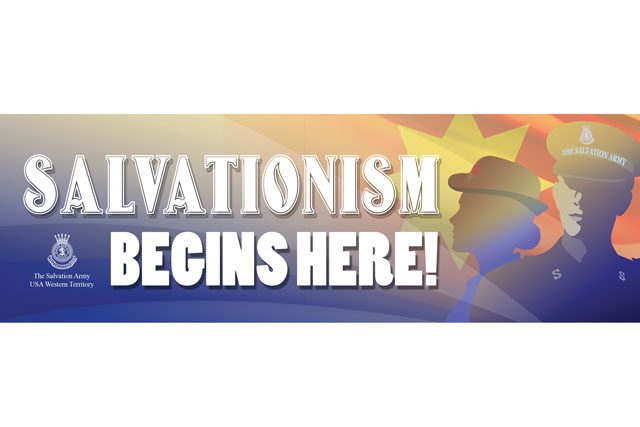 Salvationists in the Western Territory can embrace the spirit of Salvationism through a territorial enrollment campaign, “Salvationism Begins Here!” in 2016 that issues a challenge for corps to increase enrollees in soldiers, junior soldiers and adherents by a greater amount than in 2015.

“We take great encouragement in the growth we have already seen and trust that, as we take action in faith, the Holy Spirit will continue to stir many more hearts to take up the call to action and involvement as members of The Salvation Army—as soldiers and adherents,” said Aleen Bradley, territorial director for leadership, evangelism and discipleship.

Salvationism is the lifeblood of The Salvation Army—that which propels its soldiers to fight ‘while there remains one dark soul without the light of God,’ as Founder William Booth said, using whatever creative and innovative means necessary,” Bradley said. “Salvationism begins at the point where believers take up their cross to follow Jesus, moving forward with continual passion and purpose, hearts blazing.”

The program department will equip corps officers with materials designed to inspire creativity and to help develop more comprehensive resource understanding for enrolling new members who are encouraged, moved by the spirit of Salvationism and excited to join this holiness movement. These materials will include devotionals, program outlines and suggestions, a new children’s Bible curriculum, access to online materials and creative suggestions for implementation.

In addition, People Count will feature a video about why some Western Territory soldiers decided to join The Salvation Army, with additional enrollment stories from the field.