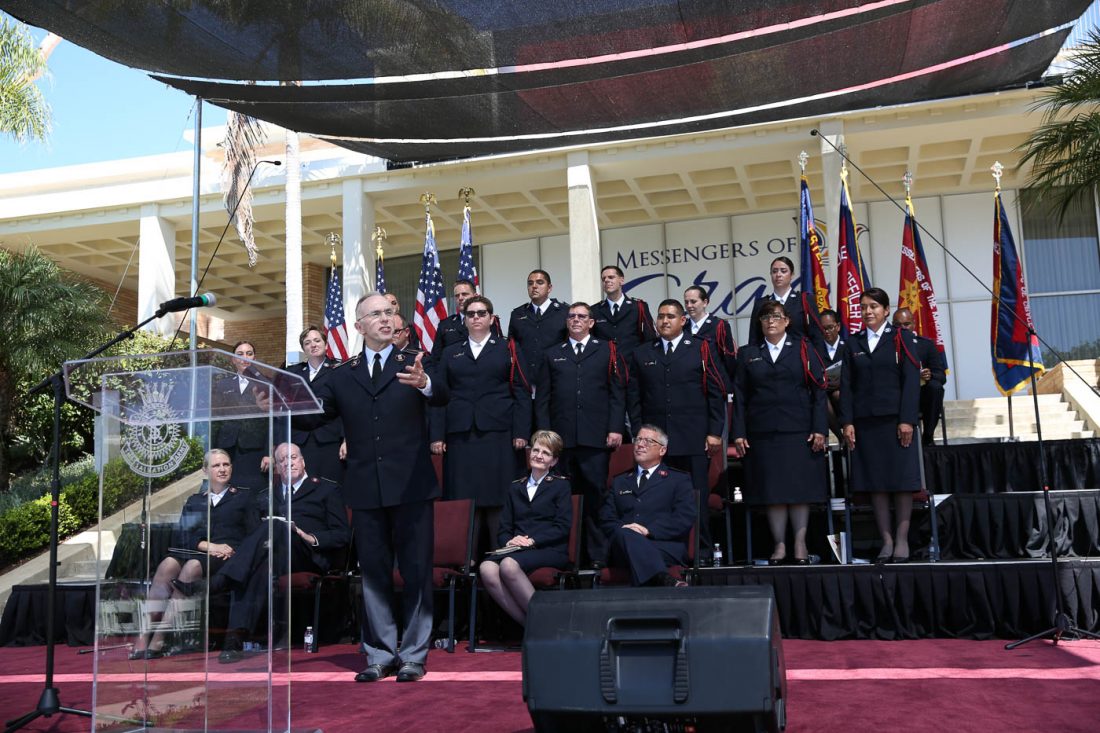 Salvation Army welcomes 14 cadets to officer training in the West

Fourteen cadets begin training at the College for Officer Training at Crestmont in 2019-2021 session. Salvationists and friends assembled Sept. 7 on the front lawn of The Salvation Army Crestmont Campus in Rancho Palos Verdes, California, to welcome 14 cadets of the Messengers of Grace Session.

Thirteen cadets come from throughout the Western Territory with one cadet from the Brazil Territory. “I am surrounded by God’s grace,” the Cadet Chorus sang in a presentation of its session song, “Grace Sufficient” by Harry Read and Dick Krommenhoek. “This grace, his grace is my sufficiency.”

In her testimony, Cadet Melissa McQuade shared her introduction to The Salvation Army at age 7 after her mother started working at the Gresham Corps in Oregon. She said those at the corps made her part of their family and she accepted Jesus at a young age. “I lived by my own plan during college, and when I worked at camp one summer, I struggled to share Jesus with campers because I hadn’t let Jesus be real in my own heart in a long time,” McQuade said. “That summer I made the decision to stop running from him. I started doing things God’s way and was amazed by the joy that came from that. He gave me joy in obedience.

“God saved me,” she said. “He saved the Messengers of Grace and now he’s called us to be his agents of grace in the world.”

Louangamath also presented Accepted Candidate Cody Trimmer as a member of the 2020–2022 session, the Messengers of Reconciliation. Jolene K. Hodder recognized the work of The Salvation Army around the world, now in 131 countries, and across the West before welcoming summer Service Corps participant Elaine Zumaya to give her testimony.

“My relationship with Christ has grown to heights that I didn’t think were possible,” Zumaya said, reminiscing on the past two summers serving with teams in Chile and Wales. “Going into this summer, I was an unsure young adult but today I am a reassured young adult who God has called. I am forever grateful for being able to serve overseas.” In his message based on 1 Samuel 16:1-13, Hodder reflected on the selection of David by God through Samuel to lead the nation of Israel.

It is a story that comes with number of lessons, he said.

“First, no one is outside of the sight of God,” Hodder said. “It may not be apparent to you or me, but God’s eyes see it all and he knows what needs to happen. Nothing escapes his notice.”

Second, Hodder said, obscurity is frequently where God trains his leaders. “It’s often where you don’t anticipate finding a leader that it is exactly where they can be found,” he said, noting the leadership of Abraham Lincoln, Mother Theresa and Nelson Mandela. “Third, what matters in the end is faithfulness, regardless of the context in which we find ourselves,” Hodder said. “Fourth, the training will come. We all know when David finally was recognized as the one to lead the nation of Israel it was just the beginning of his training.”

As Hodder described ways in which a Salvation Army officer might love and serve, the cadets stood one-by-one behind him.

“Handpicked by God, I am ready to give my all,” he said before turning to the crowd. “What about you? God has a plan for you and he has handpicked you for that purpose. Will you submit to him?” Hodder invited the cadets to the mercy seat where they were joined by family and friends.

Music throughout the service was provided by the Pasadena Tabernacle Band, led by Bandmaster William B. Flinn, OF, and the Santa Barbara Worship Team, including special music by Michelle Williams.