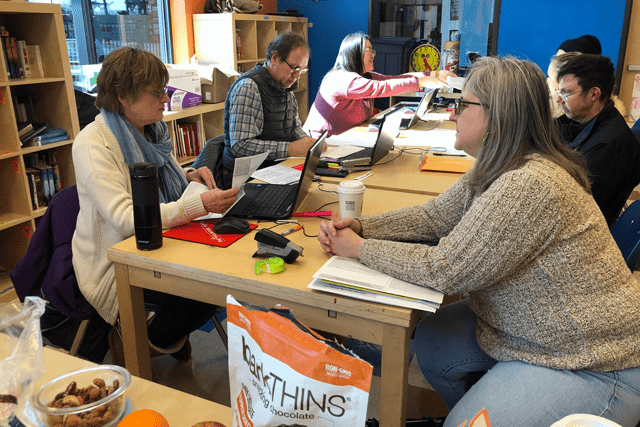 With tax preparation costs soaring and U.S. tax laws constantly changing, tax season can be stressful and difficult for many Americans. Salvation Army corps throughout the U.S. Western Territory have stepped up to provide free tax preparation services.

“The cost of taxes is astronomical. Some people don’t get as much back as what they pay to have their taxes done,” said Captain Jeff Williams, Corps Officer in Chandler, Arizona. “And then people can’t afford to get their taxes done in the first place and…end up not doing it and getting stuck in some type of tax evasion or something with the IRS and it’s simply because they can’t afford to do it.”

The Salvation Army Chandler Corps partnered with the Mesa (Arizona) United Way this year to offer a free tax program at the corps building, run through the Internal Revenue Service’s Volunteer Income Tax Assistance (VITA) Program. Volunteer agents are available on Wednesdays until April 13 to assist low-income families in filing their taxes. Through the partnership, client tax returns filed through the program have totaled over $100,000.

Among these clients was Josefina Flores, who was excited at the convenience of having the service available to her at the Chandler Corps.

“This is great,” Flores said. “I know how much it costs. I have friends who pay so much. Everything went smoothly and I liked the process and the environment.”

Williams sees the program as a way to connect clients to the corps, too. In fact, two families who used the service have applied for their children to join the corps’ after-school program.

“It allows us to open up the ability to dialogue with people…and just share The Salvation Army story,” Williams said. “Any time that we can do anything that enhances the quality of life of the folks we work with, that is always going to be a win. We’re here to help people. It’s a great feeling to be there to help people knowing that this is a another burden [lifted].”

In Mesa, The Salvation Army has provided the same volunteer-run program for the past seven years alongside the Mesa United Way. It runs on Monday and Tuesday evenings throughout tax season.

In 2018, 316 returns were filed from the Mesa Corps site, resulting in more than $375,000 in federal refunds. Mesa Corps Officer Major Tom Ford said he hopes to continue the program for years to come as it “gives people piece of mind.”

Other communities have similar partnerships. In Gresham, Oregon, The Salvation Army works with the American Association of Retired Persons (AARP) to have volunteers file tax returns for free to community members. The program—which is in its eighth year—functions by appointment on Saturdays until April 15. It helps about 120 people each year.

“Taxes can be kind of scary if you’re not used to doing them yourself, so it’s a great service,” said Marcia McQuade, Gresham Corps office administrator. “It’s a real blessing for a lot of people.”

Michelle VanAusdell sought help through the program at the recommendation of her friends.

“The volunteer tax preparers are so kind and helpful when doing your taxes and explain everything,” VanAusdell said. “I also love that they each check each other’s work so they know it’s all correct…It’s nice to know they are there year after year, and by them volunteering their time it saves my husband and me about $200 to not have to pay a tax preparer.”

The Salvation Army in Turlock, California, works with the California State University Stanislaus to provide free tax filing services through the VITA program. The university vets and selects students to work as volunteer tax preparers at the Turlock Corps. Certified Public Accountants help check their work. The corps has offered the program for 14 years, filing 91 tax returns in 2018 that totaled $172,611 in client refunds.

“When you see the relieved look on people’s face after they get their taxes done, that pretty much tells the whole story. A lot of these folks can’t afford to have somebody else do their taxes,” said Major Debi Shrum, Turlock Corps Officer. “In some cases, we’ve had people who have not done their taxes for a couple of years and these guys will work with them on that and clear back tax years for them. It just lifts them so much.”