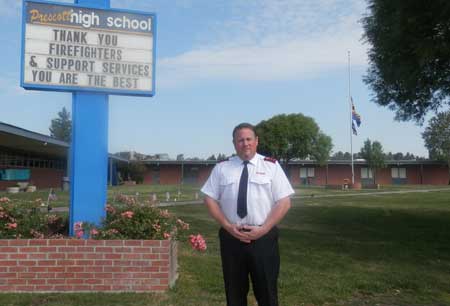 A first-person look back at a unique opportunity for the Army.

The Prescott High School football stadium is familiar to me; I attended Prescott High for my junior and senior years, graduating in 1982. Now, I found myself there, 31 years later.

It was 6 a.m. on July 8, the day before the memorial service for the 19 Granite Mountain Hotshots who perished in the Yarnell Hill Fire, outside of Yarnell, Ariz.

I was there because God had placed The Salvation Army at Prescott High School exactly six days earlier. I was incident commander for The Salvation Army’s Emergency Disaster Services operations for the fire, and I provided logistical support to the Incident Command Post (ICP).

I know your deeds. See, I have placed before you an open door that no one can shut. I know that you have little strength, yet you have kept my word and have not denied my name (Rev. 3:8 NIV). God placed an open door to the ICP before us, and through the prompting of the Holy Spirit I walked The Salvation Army through that door.

What was that door? Simply stated, under normal circumstances, the ICP has its own resources and budget for disaster events. Normally they handle their own catering, purchasing of supplies for logistical support, and so on. However, in this case, no federal funding had been released for this event. The ICP’s duties for this disaster were unique because more than 85 percent of their responsibilities had to do with facilitating the memorial service for the 19 fallen firefighters and the care of their families before, during and after the memorial and funeral services. Since they had no budget for such an undertaking, they called on us to feed the people working at the ICP.

Staged at Prescott High School, we began feeding members of the ICP July 2 in addition to feeding the fire evacuees at the Red Cross Shelter, the Red Cross headquarters, and the county emergency operations center.

By evening, the chief and deputy chief of the Logistics Section of the ICP began to ask what other resources we could provide. “How can The Salvation Army help?” I replied. The first request was for 50 towels for the incoming firefighters and honor guard who would be arriving over the next few days. We provided towels the next morning. 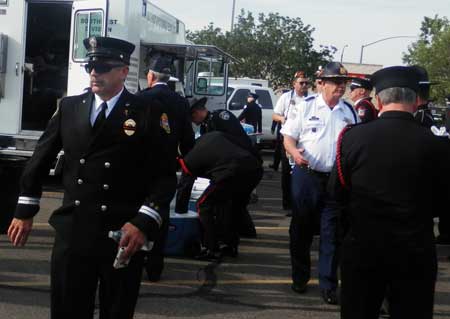 “Wow…where have you guys been all my life?,” the deputy chief responded. Since we handled their first request so quickly and efficiently, their trust in our abilities grew rapidly, and I began to build a relationship with the deputy chief logistics officer. Through the grace of God, the gifts and talents of the crews under my command, and the support of the Southwest Division under Lt. Colonel Joe Posillico, we were able to supply every need that the ICP requested of us.

By July 8 we had five feeding operations and a social service operation in Yarnell. We supplied 100 chairs and 25 tables for the individual funeral services, nearly 100 cots, more than 100 blankets, pop-up awnings, sheets, pillows, blankets, toiletry items and 250 bottles of hand sanitizer. We also supplied building materials for the carpenters who were making the boxes that the coffins would rest on.

We provided so many items, it was hard to keep track of them. Maybe most importantly, The Salvation Army officers and staff provided emotional and spiritual support at the memorial wall honoring the firefighters, in the city of Yarnell and at the memorial service.

God used the lack of federal funding to place The Salvation Army in an arena where we normally do not operate. The Lord wanted his Army in place to directly minister to high-level individuals, the families of the fallen Hot Shot crew, and to those suffering the loss of their homes in Yarnell. We were God’s chosen instrument for this disaster in very specific areas. I cannot thank God, and The Salvation Army, enough for the opportunity to serve suffering humanity in the name of Jesus Christ during this time of disaster and tragedy.