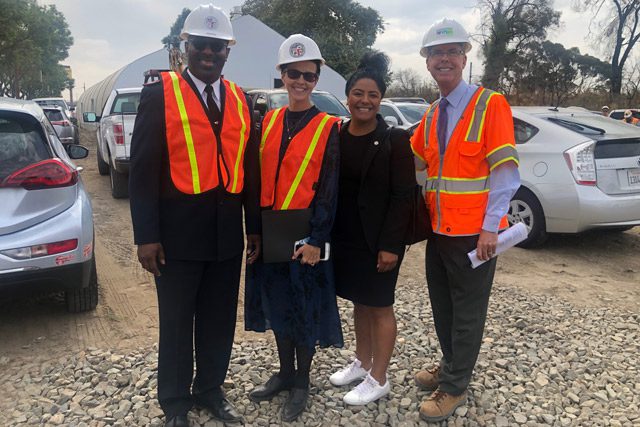 The California South Division is working to open a pair of shelters for those experiencing homelessness in Los Angeles, starting with a 100-bed shelter in Watts. The Salvation Army was approached by the city of Los Angeles, Los Angeles County and the city council districts to be operators for the government-owned shelters.

“It’s a great opportunity because within the division, but mostly within Los Angeles County, The Salvation Army has really maxed out its residential facilities—our shelters can’t be expanded,” said Anabel Sanchez, Divisional Quality Assurance Director. “The only way we can expand in the community is to use properties owned by the government and run them.”

The Army’s goal is to double its impact on homelessness in L.A. and throughout the Western Territory through The Way Out initiative. The two forthcoming government-owned, Army-run shelters in the neighborhoods of Watts and Lafayette Park are designed to be temporary and utilize modular dome-like structures to fulfill housing needs for three years until the city’s permanent housing structures are completed. A team from the city views the site of the Watts shelter.

“This is the humanitarian crisis of our lives,” said Los Angeles Mayor Eric Garcetti in a video about the forthcoming Watts Shelter. “Nothing is going to be better for stopping homelessness than building beds and building them in the neighborhoods where people are currently homeless. That’s the way we can make sure we can get people out of tents, off the sidewalks, out of their cars.”

Los Angeles officials reported in June that the number of people living on the streets, in vehicles and shelters increased by about 12 percent over last year. Within the city of Los Angeles, the number jumped to more than 36,000—a 16 percent increase, according to the Los Angeles Times.

Councilmember Joe Buiscano represents L.A.’s Council District 15. One of his goals is to “get souls off the sidewalks.”

“We need to remind ourselves that these sidewalks are for the public, they are for everyone,” Buiscano said.

The shelters aim to help those experiencing homelessness within a two-mile radius of each location, focusing on individuals. Seventy percent of projected clients are men.

The 100-bed Watts shelter is set to open in mid-November and will provide food, showers, workforce development services, case management, washing machines and mental health and addictions services. The 70-bed Lafayette Park shelter will open in early 2020.  Plans are in the works for a potential 100-bed location in Mid-Wilshire. The goal is for individuals to stay at the shelters for 3–6 months before moving on to permanent supportive housing, but with the city’s housing shortage, it often takes individuals 9–12 months to find a home depending on the demographics and the vulnerability of the client—if they’re a senior or have medical conditions, for example, it can take longer.

The Army has paired each of the new shelters with one of its pre-existing residential facilities to take advantage of its resources. The Watts shelter will pair with the Army’s Hope Harbor and in Lafayette Park, the new shelter will serve as an expansion of the Army’s Alegria facility, leveraging its kitchen, program director and business manager. This way, clients will receive wraparound services and case management in addition to a safe place to sleep.

“We are in a time in which homelessness is the stain on society and it has become an epidemic here in Los Angeles,” said Major Osei Stewart, General Secretary and Los Angeles Metropolitan Area Coordinator. “We know that these two new shelters will make a difference in the lives of over 180 persons daily. In partnership with the Los Angeles Mayor and council district officials, we seek to alleviate homelessness one person at a time, while providing the services they need to make them productive citizens.”

Sharing is caring!
Tags:
California South, Homelessness, November 2019, The Way Out, Vol 37 No 09