The Salvation Army in the San Francisco Greater Bay Area is partnering with Bay Area Rapid Transit (BART) through a new “Partners for Change” initiative during the 2019 Red Kettle Campaign.

“Partners for Change” will run from Nov. 22 to Dec. 24 and give The Salvation Army Golden State and Del Oro divisions access to place red kettles in the free area of any of the 48 stations during BART hours. Donated funds from BART riders will help provide supportive services for those who seek shelter inside BART stations and on-board trains.

“We are thrilled to be partnering with The Salvation Army on its Red Kettle Campaign this year. Not only is the red kettle iconic, we are glad to be engaging in this ongoing partnership to address the homeless issue in the BART system,” said Tim Chan, BART Group Manager for Station Area Planning.

The “Partners for Change” initiative dovetails with the Army’s commitment to double its impact on homelessness in the West, The Way Out. Those experiencing homelessness in BART stations will be directed to the Army’s facilities, like the San Francisco Harbor Light Center, which has a long history of partnering with BART for outreach on quality of life issues.

“Our Harbor Light Center has been working with people, trying to see if they’re just done living the way that they’re living and trying to survive,” said Captain Matt Madsen, Golden State Divisional Secretary and Men’s Ministries Coordinator. “We’ve got a better way for them, and that’s one way.” 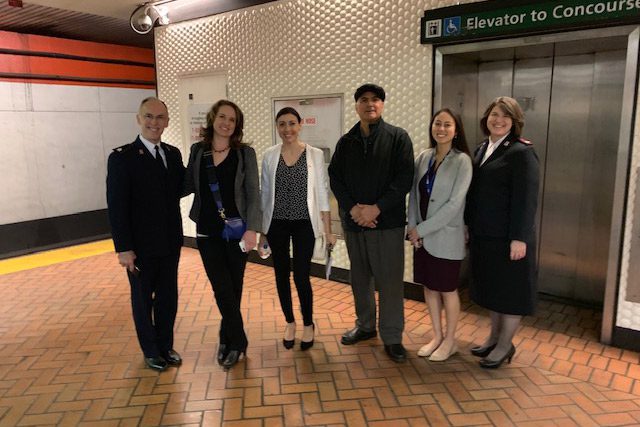 In addition to allowing the Army to stand kettles in its stations, BART will post signs encouraging riders to donate at ticket vending machines, bill change machines and add value machines. Riders will also be able to donate any remaining fare on their Clipper Cards, the regional electronic transit payment cards, to The Salvation Army.

“We have done kettles at BART before, but we are excited the BART management included The Salvation Army in the advertising in the train cars themselves and on the walls of their stations and near their change machines,” said Major James Sullivan, Del Oro Divisional Secretary for Alameda County.

With access to all BART stations and a limited number of bellringers, Madsen said the Army will be strategic in scheduling kettle shifts at peak times at busy stations, to remain “effective and efficient” though he anticipates by the end of the season, they will have rang the bell at all of them. To help with planning, BART has provided the Army with ridership data.

“BART is a mode of transport for many, many people in the Bay Area, not only in San Francisco, but across the water and in the Del Oro Division’s Oakland area,” Madsen said. “With all of the signage and messaging that BART is providing…it’s going to just remind people that The Salvation Army is here to make a difference and they’re partnering with us—that’s what we’ve been able to do in our history of 150 plus years is to be able to bring change. It’s great to be validated by an organization such as BART to know that not only have we been doing it, but they want to continue and help us in that quest.”