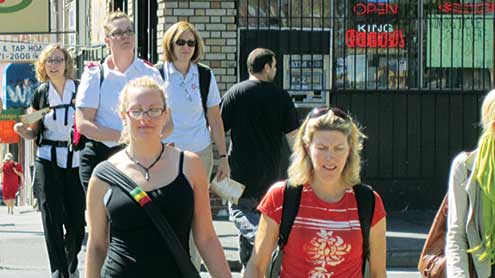 Groups unite in a prayer walk to raise awareness of human trafficking.

Trafficking in Persons, according to the United Nations, includes three elements: (a) recruitment, transportation, transfer, harboring or receipt of persons (b) the use of improper means, such as force, abduction, fraud, or coercion; and, (c) the objective of exploitation, such as sexual exploitation, forced labor, servitude or slavery.

Twelve concerned individuals met at The Salvation Army’s Golden State Divisional Headquarters in San Francisco before setting out on an educational prayer walk through the city’s Tenderloin district—characterized by higher crime and lower income—to raise awareness of human trafficking.

Organizers of the prayer walk intended to draw attention to the tragedy of human trafficking. Sex and labor trafficking know no boundaries, affecting college graduates as well as the uneducated. Trafficking has now surpassed the arms trade as the second largest organized crime—resulting from the reusable nature of the “product.” Organizers also hoped to illustrate that sometimes all that might be needed to help a victim escape is for one person to show that victim dignity and respect.

“The fact that it is a silent industry where they [victims] don’t usually talk to others…reminds us to be friendly and welcoming to everyone we meet, not knowing the other’s back story…we might just be the person who ‘sees’ them and becomes their only friend and ally,” said Jaime Smith, San Francisco Metro volunteer coordinator.”

Lieutenant Lisa Barnes, corps officer with her husband Anthony at the South San Francisco Citadel Corps, said, “This experience was eye-opening…I didn’t realize that this happened in my own back yard. I didn’t realize that people whom we encounter every day may have been trafficked or exploited. Thankfully however, I also didn’t realize how many people are fighting on the front lines to help these victims…how many organizations are working together to bring restoration and freedom to them. I am proud to be part of that partnership, and to stand alongside others as an agent of healing, and I am proud not to be powerless against some of the evil things we encounter in this world.”

Along with the members of STOP-IT, other groups participating were the Asian Pacific Islander Legal Outreach (APILO), the SAGE project, and Larkin Street Youth Services. APILO works to bring together regional and national networks in combating international trafficking and providing resources for victims. SAGE—Standing Against Global Exploitation—exists to bring an end to commercial sexual exploitation of children and adults. Larkin provides services to help San Francisco’s most vulnerable youth move beyond life on the street. STOP-IT strives to educate the community and works directly with suspected trafficked persons.

The 90-minute prayer walk was a success, as people stopped to ask why the walkers had taken to the streets. 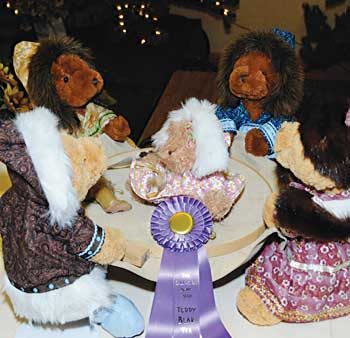