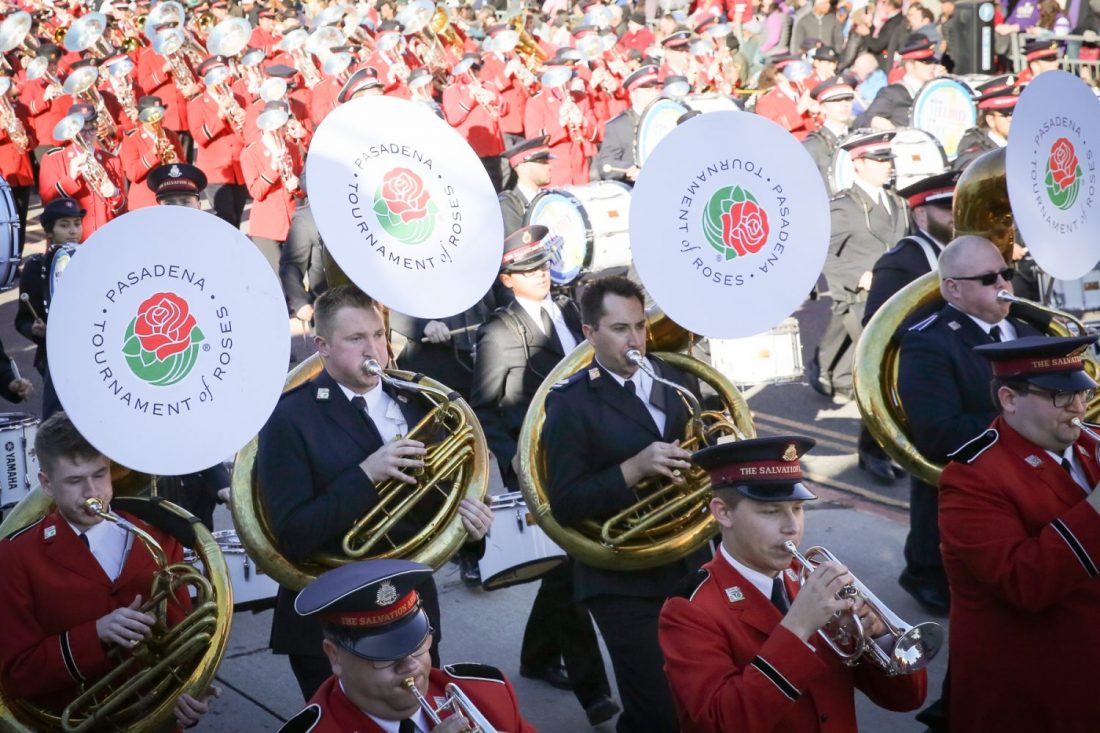 The milestone anniversary comes with a bigger, more diverse band.

This New Year’s Day, The Salvation Army Tournament of Roses Band marched in the world-famous Rose Parade like it has 100 times before. With the centennial anniversary of the Army’s participation comes a bigger—and more diverse—band.

Typically, around 180 Salvationists march down Pasadena’s Colorado Avenue each year. The group is usually comprised of Southern California-area band members, a guest band and individuals from other territories.

This year, more than 400 people participated, with guest bands coming from New Zealand, Australia, the UK, Canada and the other American territories, plus individuals coming from Brazil, South Africa, Jamaica and India.

While band members journey from around the world to participate, The Salvation Army Rose Parade Band is organized by the California South divisional music department, led by Bandmaster Kevin Larsson, who has served in the post for 18 years this parade.

“It is the world’s biggest open air,” Larsson said. “That’s why we keep on investing into it…we’re playing ‘Amazing Grace’ or ‘Stand up for Jesus’ and often the name of the song is displayed on TV, so we can reach millions, millions and millions with that ministry.”

Bands started to arrive Dec. 26 to stay at Camp Mt. Crags and had a full agenda. They gathered together to practice once before the parade on Dec. 30 for two hours in the parking lot of the StubHub Center in Carson.

“One of the main challenges we have is that the bands that participate practice for hours every morning for years to actually be in the parade, and we only have one rehearsal,” said Jacqui Larsson, California South Assistant Divisional Program Secretary. “That’s going to be literally the only time that the bands are together with the locals to practice for the parade…we just have to expect and hope that they’ve memorized it all by the time they get here.”

This year, participants attended an international music school at Camp Mt. Crags, and were broken into eight international sub bands that performed at local corps throughout the week. The Salvation Army Tournament of Roses Band marches in the Rose Parade for the 100th time on Jan. 1, 2019 in Pasadena, California.

At the end of the time together, the bands will have a joint concert at the Tustin Ranch Corps on Jan. 2, and will perform in a parade at Disneyland on Jan. 3.

Among the international attendees is Ken Waterworth, a bandmaster traveling from Melbourne, Australia, with a youth band from the Australia Territory. Waterworth marched in the Rose Parade in 2014, when he brought the Australia Southern Territory Youth Band.

“This is a significant opportunity for young Salvationists from Australia to join together with young people from all over the Army world to represent The Salvation Army at this prestigious event. For us it will be a wonderful march of witness,” Waterworth said. “We are praying that this experience, both the parade and music school, will create lifelong memories for these young people and encourage them in their ministry.”

Recently retired CEO of the Pasadena Tournament of Roses Association and bandmaster at the Pasadena Tabernacle Corps, Bill Flinn said in a single block, The Salvation Army band can pass up to 25,000 people, while millions around the world tune in to watch the parade. The Salvation Army is the longest continual band that’s marched in the Rose Parade, morphing from the small Pasadena Tabernacle Corps band that first appeared in 1920 to including individuals from around the world today.

“It’s still a thrill when you are marching down Colorado Boulevard with the million or so people, and they kind of sing along as well,” Kevin Larsson said. “People certainly love The Salvation Army and they make that known as we’re marching down.”