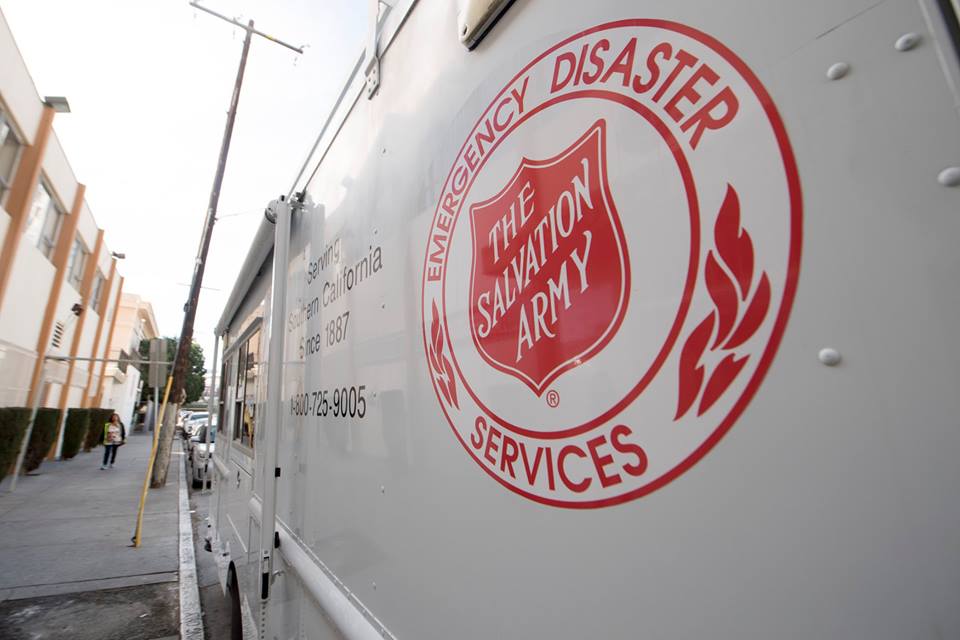 “I’ll go,” Major Susan Jones said, when she heard of the need.

Major Susan Jones was enjoying an event for retired officers in the Northwest Division when Divisional Commander Lt. Colonel Bill Dickinson mentioned team members were needed for disaster relief at the Carr wildfires near Redding, California.

“I’ll go,” Jones said immediately. And within 48 hours she was on a plane.

Although her husband, Major Cliff Jones, had served in disaster relief after Hurricane Katrina, she never had—but she always wanted to.

For 12 days in August, Jones offered emotional and spiritual care to families impacted by the wildfires. Her role included greeting thousands of people who came to the distribution center seeking material necessities or assistance with referrals.

“They arrived with only the clothes on their back, in a state of shock, with no idea what they were going to do next,” Jones said. She quickly discovered the value of her work—listening, hugging, loving and guiding.

“[It’s] the ministry of presence,” she said.

Impressed with the Army’s disaster response effort, Jones witnessed the cooperation among local corps, as well as the collaboration with the 50-plus agencies working with VOAD (Voluntary Organizations Active in Disaster).

“The active officers are very skilled at technical work,” she said. “There was lots of technology for logistics and operations. It freed me to be where the Lord wanted me, at a specific place and time, with specific people.” She referred to some of those experiences as “divine encounters.”

Jones formed a special connection with several people, including two women, quilters who and lost their quilting machine—and livelihood—and a 90-year-old woman forced to abandon her home with only 30 minutes notice to collect personal items. Despite the tragedy they endured, Jones said her brief time with them was “God-driven.”

Dickinson acknowledged the experience retired officers bring to these situations.

“The work of retired officers in disaster situations is highly valued,” he said. “We’re fortunate that upon hearing about the need for emotional and spiritual counselors, Major Susan Jones quickly agreed to go and serve. An opportunity to serve in some capacity had been on her prayer list and God connected our need with her prayer. God is good!”

Jones credits God with giving her the resources she needed to serve.

“The Lord gives you a supernatural joy and strength,” she said. “It was a deep, spiritual experience for me.”