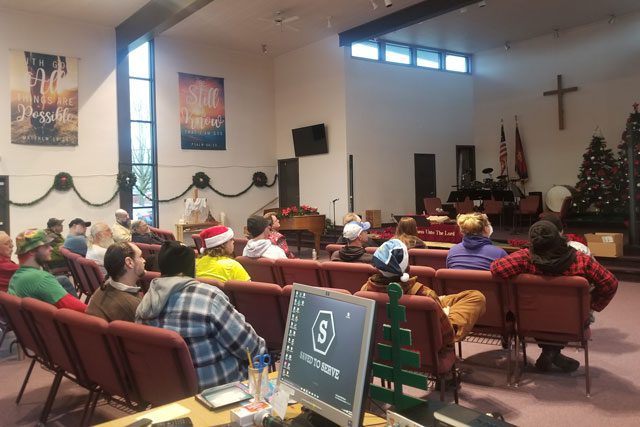 How one “no” led to greater financial and spiritual returns for the Albany Corps.

To fill the gap, DeJesus and the corps worked hard to recruit kettle workers. But instead of a transactional bellringing shift experience, DeJesus used the opportunity to minister to the bellringers.

At the start of each shift, the corps fed the workers a solid meal, where they were briefed on the campaign’s progress and their purpose in it. Some of the bellringers were homeless and needed suitable footwear and clothing before going out in the elements, which the corps provided.

“It’s tempting to treat kettles like a business or a ministry, but I see it as both,” DeJesus said.

The result? A fruitful kettle season—both financially and spiritually. The amount of donations was above that of last year from day one. And at a Christmas Eve chapel service held for the workers, 10 people accepted Christ.

“It was a very, very good Christmas season,” said Major Floyd Bacon, a retired officer who assisted in the corps’ kettle efforts. “The Lord used what the lieutenant was doing.”

One of this year’s kettle workers was Marisa Estenson, a mother who was hunting for a job and heard about the opportunity from a friend who said the Army did not discriminate. She thought about it and decided, “Why not?”

Estenson rang bells every day at different locations, and said she experienced both being ignored and the goodness of humanity.

“It was cold, but it was worth it,” Estenson said. “I didn’t realize how many people cared and wanted to give.”

Now that kettle season is over, Estenson is applying for other jobs, but plans on ringing bells again. “I’m doing it every year,” she said—the experience “meant a huge deal to me.” The Albany Corps held a Christmas Eve chapel service for the 22 men and women who rang bells during the kettle season. During the service, 10 people raised their hand to accept Christ.

The corps’ mission to show bell ringers how much they were valued made a difference.

“Over the six weeks we were able to establish relationships and break down some barriers of guilt and shame,” DeJesus said. “No matter what they had been told, we told them they were somehow created in the image and likeness of God and that they are loved.”

Even though the corps lost an important kettle location, had to hire paid bell ringers, faced an increase to the minimum wage and decided to pay for an hour of eating and talking with the workers each shift, both the gross and net profits were up. To sweeten the situation, a donor gave $97,000.

The ministry side of kettle season culminated in the Christmas Eve chapel service for the 22 workers. DeJesus said the workers didn’t have to participate, and could stand outside if they wanted to.

After the service, a kettle worker told DeJesus he felt “light and free” and he had “never felt connected to God like that” before.

“He was on cloud nine,” DeJesus said.

Many of the workers live more than 10 miles from the corps, making attending on Sundays difficult for some. Yet two kettle workers have started attending, and a corps family removed the transportation barrier by offering rides each week.